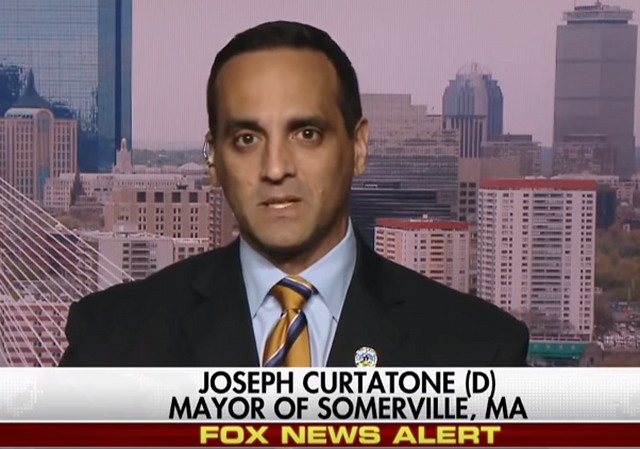 Joseph Curtatone is the Mayor of Somerville, Massachusetts, a densely settled community outside Boston which is home to Tufts University. It’s a vibrant city with lots of great culture and nightlife.

I would know. I lived in Somerville for eight years. Joe Curtatone has been in office since 2004. He is a young mayor and is very popular with city residents. In a way, Curtatone is in an enviable position for a Democrat politician. He is a progressive leader in a progressive community. If you’ve spent any time in the city, this story won’t surprise you.

Jim Koch is the founder and CEO of the Boston Beer Company, which makes Sam Adams beer. He reportedly thanked President Trump for the new tax cuts during a recent dinner in New Jersey. Upon learning this news, Mayor Curtatone announced that he is now boycotting the Sam Adams brand.

Aris Folley reports at The Hill:

Joseph Curtatone, the mayor of Somerville, Mass., said Sunday that he will never drink Sam Adams beer again after the cofounder of the Boston brewery thanked President Trump for a corporate tax cut.

“I will never drink Sam Adam’s beer again!” the Democrat said on Twitter.

Hey Jim Koch! While you were thanking Trump for your tax break, did you happen to express any concern for the families separated under his cruel and inhumane immigration enforcement policy? @SamuelAdamsBeer https://t.co/UCywb9I7xE

This is disappointing. Not just because I’ve met Mayor Curtatone and found him to be a nice man, not because a progressive politician is virtue-signaling his progressive constituents, but because it hurts working people in Boston.

The Boston Beer Company employs over a thousand people directly, but thousands more work in beer distribution, retail, and Boston area bars. Are Somerville liquor stores supposed to stop carrying Sam Adams now? How about Somerville bars? Will anyone be harassed for failing to do so?

Jim Koch is a businessman who’s looking out for his employees and stockholders. He was thanking Trump for helping all of them, not just himself. If his business does well, so do thousands of other people.

Somerville Mayor Joe Curtatone is swearing off Sam Adams, a boycott he says comes after the maker of the iconic Boston lager met with President Trump last week.

“I will never drink Sam Adams again!” Curtatone proclaimed on Twitter on Sunday, linking to a story in the Boston Business Journal that reported that Jim Koch, Boston Beer CEO, was among 13 corporate executives who dined with Trump at his New Jersey golf course, and that the beer magnate thanked him for cutting his company’s taxes.

Koch, according to a White House transcript, said lower taxes would help Boston Beer beat competitors overseas. “I mean, Americans — I’m the largest American-owned brewery at 2 percent market share… and competing against people who were paying 20,” he reportedly said. “We were paying 38 percent taxes now we have a level playing field, and we’re going to kick their ass.”

I’ll tell you a true story which proves how seriously Koch takes his company and products.

In 1997, I went to a store in MA to buy a six-pack of Sam Adams when I noticed it was beyond its expiration date. I dug through the cooler looking for a fresh one and found them all to be past due.

Knowing that the Boston Beer Company has representatives who regularly inspect stores to make sure their product is being freshly stocked, I sent them a letter informing them of my find.

A few weeks later, I received a hand-signed thank you letter from Jim Koch, along with a Sam Adams baseball cap.

That’s a man who cares about the quality of his product.

Mayor Curtatone will score some points with the “resistance” for using this situation to bash Trump, but he hardly needs it. The people of Somerville already know where he stands politically.

Jim Koch and the thousands of people who depend on him to make their living deserve better.

I beg to differ with your characterization of this scumbag. He is just another corrupt MA politician.
https://thesomervillenewsweekly.blog/2017/08/13/fbi-racketeeringextortion-probe-being-sought-against-somerville-mayor-joseph-curtatone/

And he’s a cry baby.

This will send their beer sales through the roof!

I, on the other hand, will head straight out this morning to purchase an entire case of Sam Adams!

I recall Pennsylvania-based Yuengling Brewery also taking flack from the SJW’s a few years ago, because their owner declines to use unionized labor. I’ll buy a six-pack of each brand.

I guess a thank you to the President of the United States was enough to trigger this poor little snow flake. Collectively the Democrats are engaging in an organized campaign of intimidation.

Good. More SA for the rest of us. What a douche.

Easy way to double Somerville’s revenue is to leave all the empty Sam Adams bottles on the common so that whiny Xanax eating, wine cooler sipping, D-bag can cash them in.

Another dim bulb leftist from my home state has spoken. This moron usually reserves all public comments to making nonsensical pro illegal immigrant rants, he’s a complete fool, with a brain the size of a walnut.

Or the size of a pea, as in pea brain.

Ignoring the inconvenient truth of Bob Kraft and Pres. Trump being “tight”, I’ll wager this clown is still a Patriots fan. If it wasn’t for selective outrage, many on the left wouldn’t know what to do with themselves.

Marty Walsh, the Mayor of Boston, came out against Mayor Curatone’s position yesterday in a bit of a surprise move.

It will be interesting to see if this potential boycott gains legs here in uber “progressive” Boston. The Red Sox signed a huge deal with Boston Beer last year such that Sam Adams beer is featured all over the park and numerous locations in the park are sponsored by Sam Adams. Red Sox principal owner John Henry is big lefty who also owns the Boston Globe which interestingly is leading the effort to have a coordinated anti Trump message on editorial pages across the country on 8/16.

Henry and the Red Sox led the effort to re-name a street abutting Fenway that had been named for the Yawkey family that owned the Sox for decades. Tom Yawkey was believed to be a racist because the Sox were the last team to be integrated in MLB. Perhaps he was a racist but the counter argument is that the Yawkey Foundation was done wonderful things in the Boston area for decades having donated tens of millions of dollars to local charities. If the heat gets turned up on Boston Beer it could quickly spill over to the Sox and Henry.

Not a suprise at all for the reasons you mention. Walsh doesn’t want the blowback nor the business loss.

That’s all they’ve got at this point, along with cries of “RAYCISS!”

What a bunch of pathetic losers.

Time to buy some Sam Adams

What a piece of crap this squirrel is

MA and New England in general is one of the oddest regions politically in the US. In the Obama era until the “northern states” as they are called (MA, VT, NH, ME) all have GOP governors. The “southern states” (CT, RI) have Dems. But the Dem in CT is on shaky ground this election cycle. Yet the entire region reliably sends some of the most progressive people to DC and votes reliably Dem in presidential elections still.

Kooks like Curatone aren’t that rare, but there are a lot of “moderate” types around too. The region ain’t CA. Maybe that’s because it IS a collection of smaller states. And maybe that’s a signal to how CA should proceed – break up into smaller states and remove the absolute dominance of the coast on the rest. Maybe NY should become 2 states as well….

Alister Cooke said it best. “If America had been settled from the West, New England would still be uninhabited.” Those rock fences just didn’t magically appear.

Well, technically the West WAS explored and temporarily inhabited by Europeans before New England was “settled” by the original original groups. Same for Florida, parts of upper North America, etc. The eastern settlements were just more vigorous.

The Dumb-o-crats want to administer their ideological “purity” tests on everyone under the Sun, and, punish citizens who are found less-than-enthusiastic about Dumb-o-crat orthodoxies and policies.

These people are goose-stepping totalitarians, and, their transparent totalitarian antics are made all the more perverse and hypocritical, by the fact that they always couch them in self-aggrandizing, self-congratulatory and sanctimonious terms.

He looks like one of those people who is perpetually angry.

Their bodies grew into adults, however their minds are stuck at age four!

Somerville. Ugh. A town which inspires residents to lie and say they live in Cambridge or Arlington. Except, of course, the autochthons who don’t say much of anything, preferring to communicate via grunts, snarls and odors. Not that the town is outstandingly bad . . . but it isn’t particularly good, either.

From Edge of Darkness

Just think about the insanity of an American mayor refusing to drink an American product on grounds that the American President was thanked for a job well done for an American business.

There was a time he would be tarred and feathered and rode out of town… but sadly, this is not that time…

Good, more Sam Adams for me if this asshat won’t drink any. I haven’t enjoyed a Cherry Wheat in awhile. I think I’ll pick up a case next time I’m out.

So this a—hole is for taxing the heck out of US businesses, putting people on unemployment, and having us all buy beer from big big companies overseas.

The fact that it’s a quality product, well, we can’t have any of that.

Yeah, this guy is a jerk. Boycott quality American products and put American workers on the street to benefit our EU global overlords?

He is beyond ridiculous. Wake up MA and punish him at the ballot box.

Sam Adam beer isn’t one of my favorites, but I’ll have to buy a twelve pack. Worse case, I’ll give it away.

The Mayor is a “nice” man? I don’t think so. Nice men don’t do what he’s done. “Nice” men don’t pander to the lowest common denominator in their party.

He might have once been a nice man. Now he’s just another lying politician.

I’ll buy each of my sons a case of Sam Adams in the mayor’s honor.