Imagery in German textbooks reminiscent of Nazi-era newspaper “Der Stürmer,” says the president of the Central Council of Jews 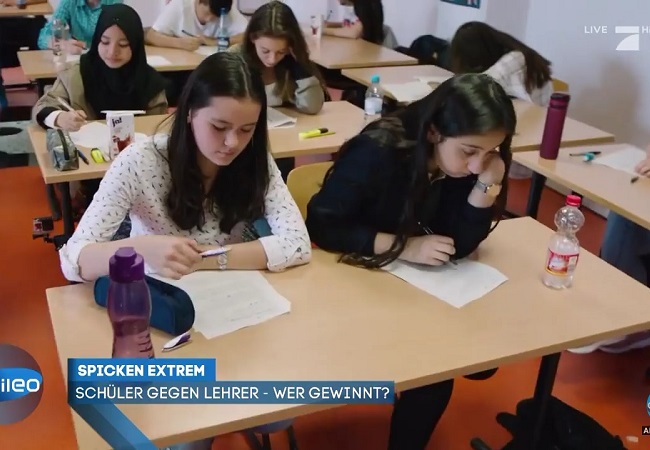 The head of Germany’s leading Jewish organisation criticized the use of “antisemitic stereotypes” in the school textbooks.

Josef Schuster, president of The Central Council of Jews in Germany, slammed the Germany’s schools and textbook publishers for doing too little to root out the problem. Many textbook illustrations in German textbooks resemble the anti-Semitic depictions from the Nazi-era newspaper “Der Stürmer,” while at the same time failing to provide the appropriate historical context to the imagery, Schuster said.

Criticism aired by Schuster is based on a detailed study published by Germany’s Georg Eckert Institute. The study evaluated history textbooks being used in schools across the country. German weekly Der Spiegel reported the details:

“There are too many illustrations [in the textbooks] which have been shaped by antisemitic stereotypes and thus reminiscent of Der Stürmer, [and] don’t offer an objective representation,” Schuster said. Der Stürmer was an antisemitic Nazi propaganda newspaper.

“We have too many textbook that treat Judaism in a very rudimentary way,” criticized Schuster. “Judaism was not restricted to the period between 1933 an 1945. “There was Jewish life in Germany many centuries before that and fortunately we have it today. One, however, don’t see that in the textbooks.”

The content regarding the case in point deals with the persecution of the Jews during the Nazi era and the Holocaust. School textbooks often show antisemitic imagery, confirmed Dirk Sadowski, researcher at the Georg-Eckert Institute for International Textbook Research. (…)

Sadowski and his colleagues took three years to examining 84 history books of various grades and from several states and were surprised to find how simplistically the Jewish life has been depicted.

Josef Schuster refers to this study when he complains that “many school textbooks take the perspective of the perpetrators, particularly when it comes to the topics of National Socialism and Shoah.” The antisemitic depictions of the Nazi-propaganda “are hardly put in the context. The antisemitic stereotype are thus reproduced, but not dealt with critique.” [Translated by the author]

The remarks by Schuster also coincide with the surge in antisemitism at German schools. In recent months, the German media reported several cases where Jewish students were bullied by their Muslim classmates. “Especially in the high- and middle-school we have (…) a growing number of youngsters who’s families come from countries where hostility to Israel and antisemitism are part of the everyday life,” Schuster said. “Teaching staff must be trained to deal with the antisemitic remarks coming from such students.”

Schuster’s concerns highlight the growing anxiety felt by Jewish parents sending their kids to school. According to a report published by German newspaper Der Tagesspiegel in March, the “religious” bullying carried out by the Muslim students target not just their Jewish peers, but Christians as well.

Meanwhile, authorities in Germany, like elsewhere in the Western world, have gone to bizarre and extreme lengths to cover-up and downplay Muslim antisemitism. In 2017, police registered 1,400 crimes targeting Jews in Germany. According to German media reports, the actual number of unreported incidents could be “considerably higher” as “many of those affected are reluctant to report the crime.” Though 95 percent of the reported crimes were apparently carried out by “right-wing extremists,” the official figures should be treated with caution. According to a September 2017 report published in the Jerusalem Post, German law enforcement has been classifying antisemitic crimes committed by radical Muslim groups, such as the terrorist-outfit Hezbollah, as “right-wing” incidents.

Chancellor Angela Merkel has been particularly reluctant in addressing the issue of Muslim antisemitism. Last December, when thousands of Arabic-speaking demonstrators chanted “Death to the Jews” at Berlin’s landmark Brandenburg Gate, she refrained from categorically condemning their actions, choosing instead to decry “all forms of antisemitism and xenophobia.”

The surging antisemitism in German streets and classrooms is directly linked to unregulated mass migration from Arab and Muslim countries. Unless Germany addresses the core issue of Muslim antisemitism, revising textbooks will have no impact.

In December 2017, Demonstrators in Berlin chanting ‘Jews, remember Khaybar, the army of Muhammad is returning’

Surely Mutti Merkel didn’t really expect anything different from people coming to Germany from a culture barely (if at all) past the seventh century founding of their religion. And we shouldn’t expect any different reaction from the German government, some of our state and local governments (and the last administration) aren’t much better (OK, we haven’t reached the point of classifying Muslim antisemitic activity as “right wing”).

Reminded me of my favorite George Will quote:

“No one ever died from reading Der Stürmer, but the culture it served caused six million Jews to drop dead”

They struck a deal with the left-kind and expected a different progression.

In order to prove their multicultural credentials, liberal Jews must join in the mobs chanting “Khyber.” After all it’s part of their culture, and you have to respect it