Will allow questioning of reporter’s interaction with Dean of Students Meredith Raimondo at protest, including her alleged attempt to prevent photos and handing out flyer accusing Gibson’s of being racist.

We previously covered the lawsuit brought by the local Gibson’s Bakery against Oberlin College and its Dean of Students, Meredith Raimondo.

For more background, see out prior posts.

Recently, we covered the college’s attempt to obtain records from Legal Insurrection relating to our coverage. After we moved to quash the subpoena and for a protective order, the college withdrew the subpoena.

The college also served a deposition subpoena on local reporter Jason Hawk of the Oberlin News Tribune. Hawk and the Tribune moved to quash the subpoena and for a protective order, after disputes arose at Hawk’s deposition as to the areas into which the college’s attorneys would be permitted to question. The details arte in our post, Oberlin College goes after another news organization’s communications.

The college filed a response to the motion to quash (pdf.), and a cross-motion to compel, asserting that it needed to question Hawk because Hawk was identified by Gibson’s as a witness as to his interaction with Raimondo at a protest outside the bakery. Hawk and the Tribune also filed a reply (pdf.).

A key issue was this testimony by Hawk at the deposition (pdf.), in which he alleged that Raimondo tried to block him from taking photos at the protest, and handed him a flyer that referred to Gibson’s as “racist” or some similar word. Hawk also described interactions with protesters. 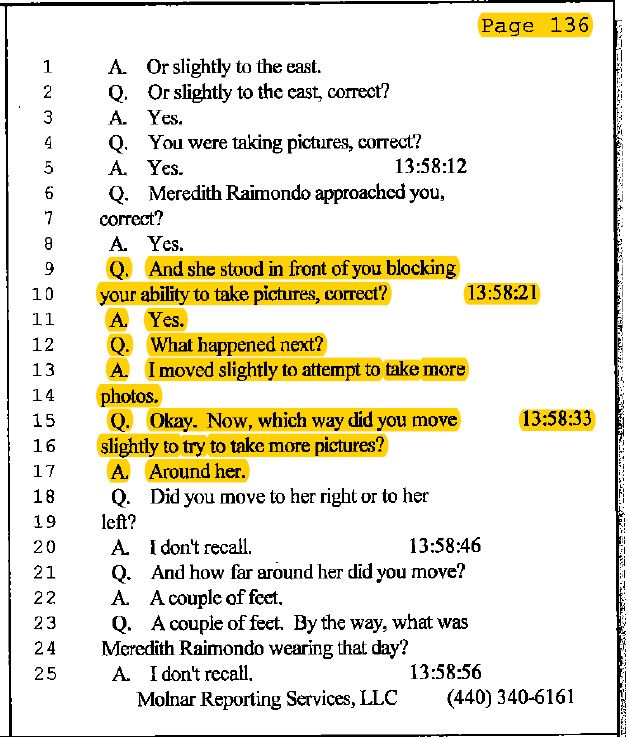 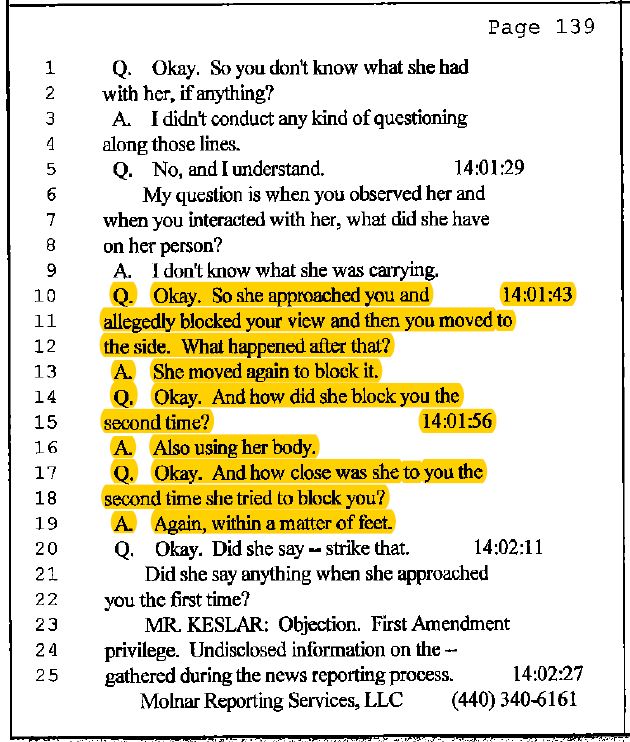 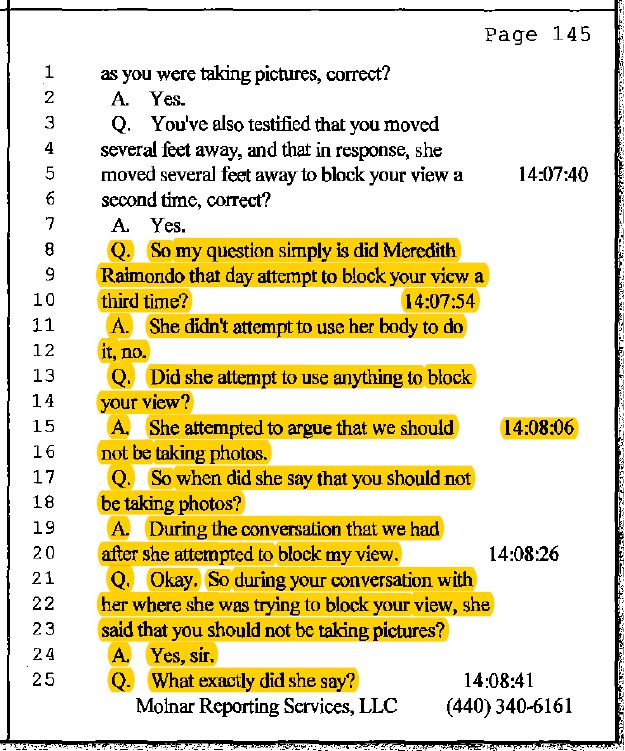 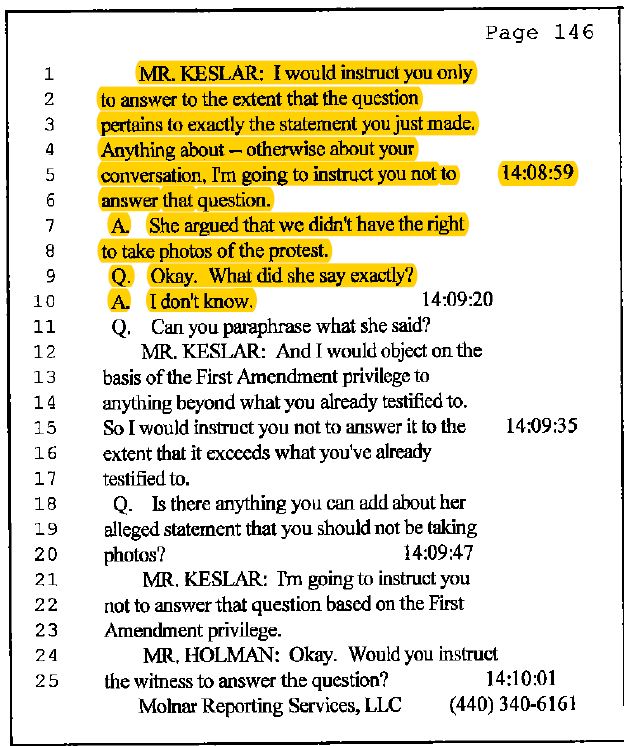 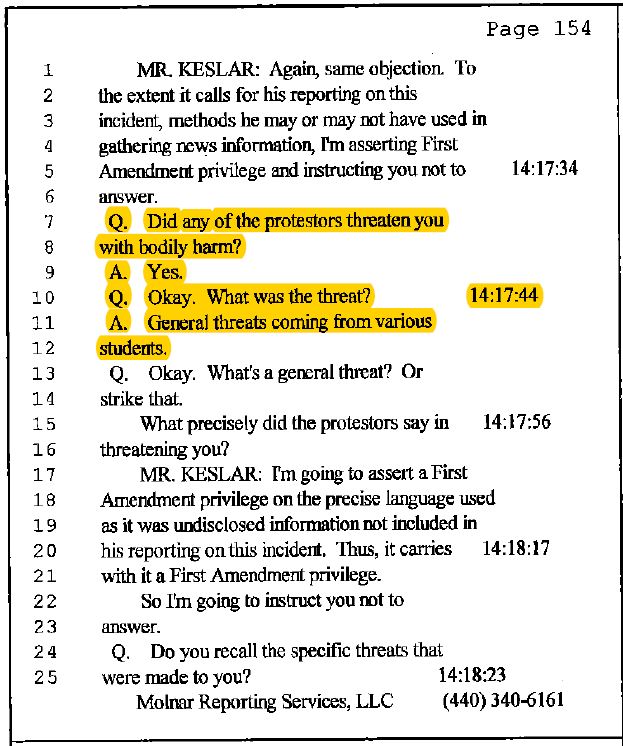 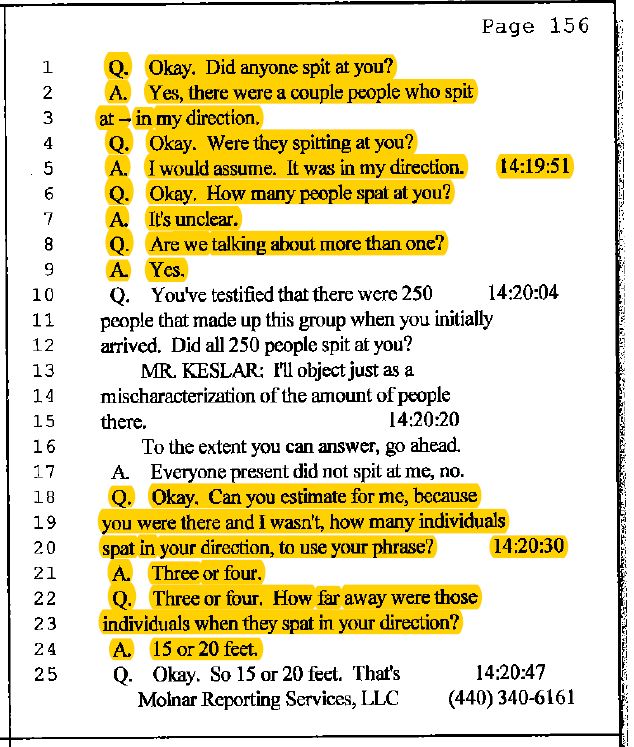 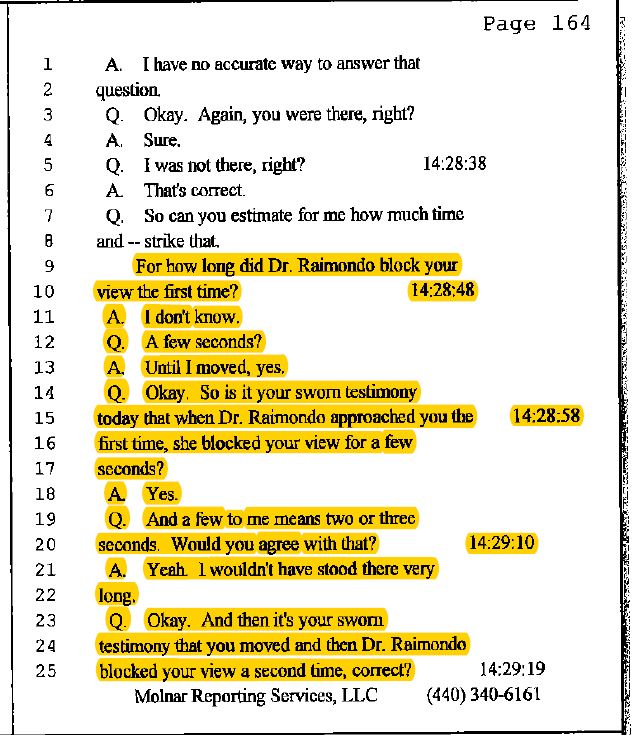 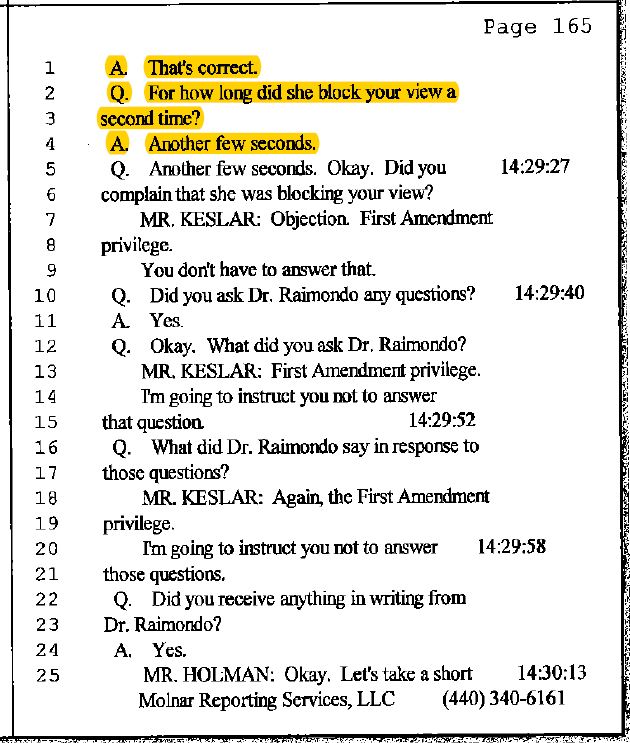 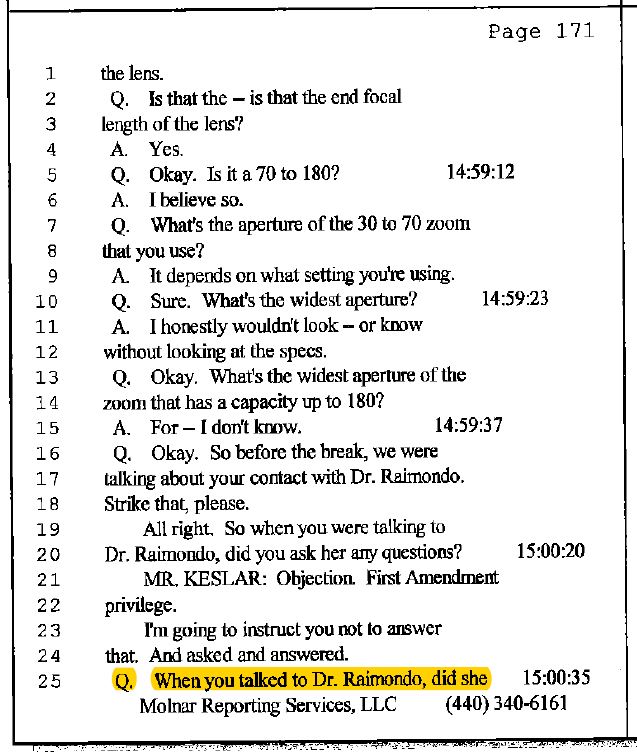 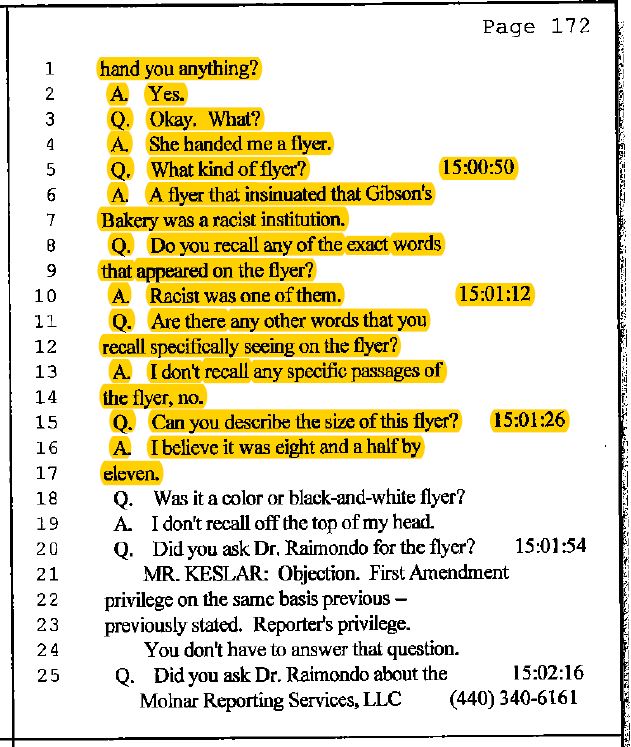 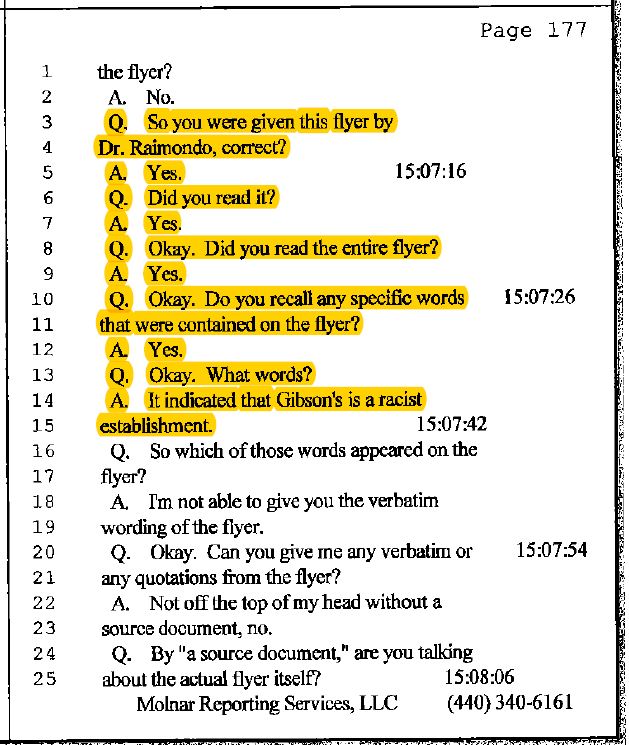 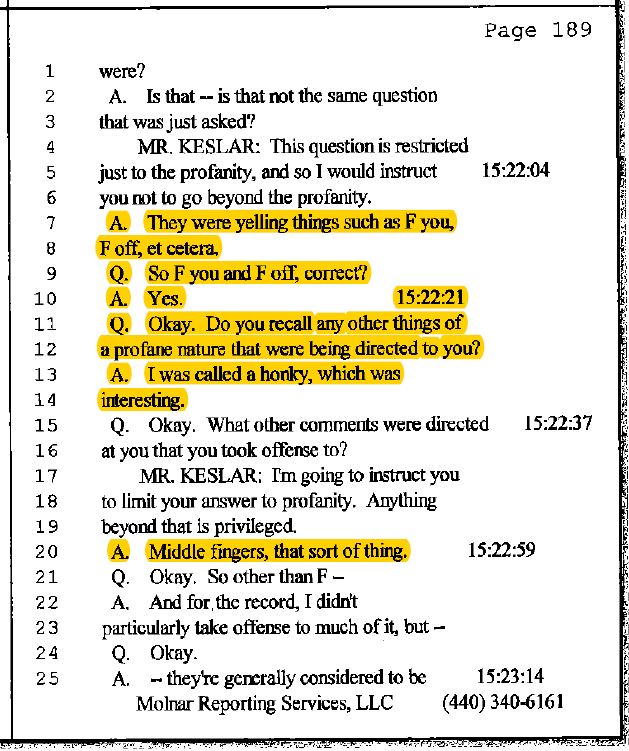 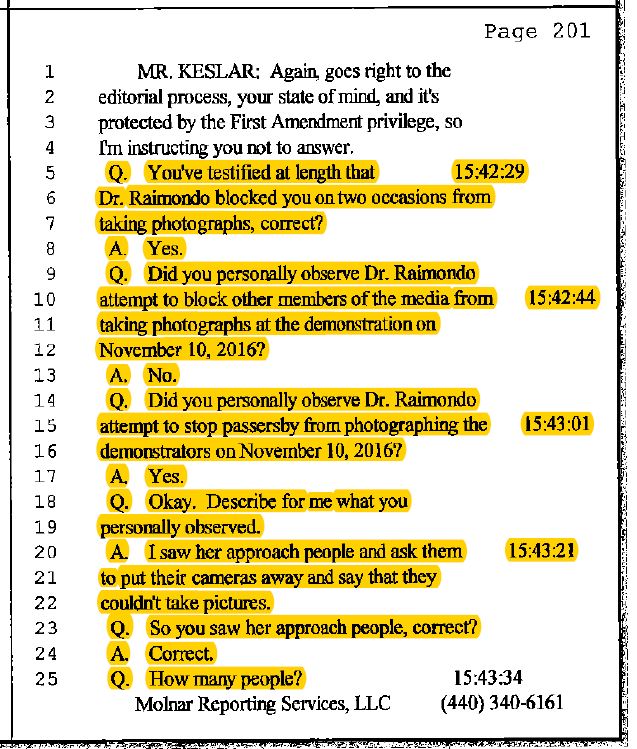 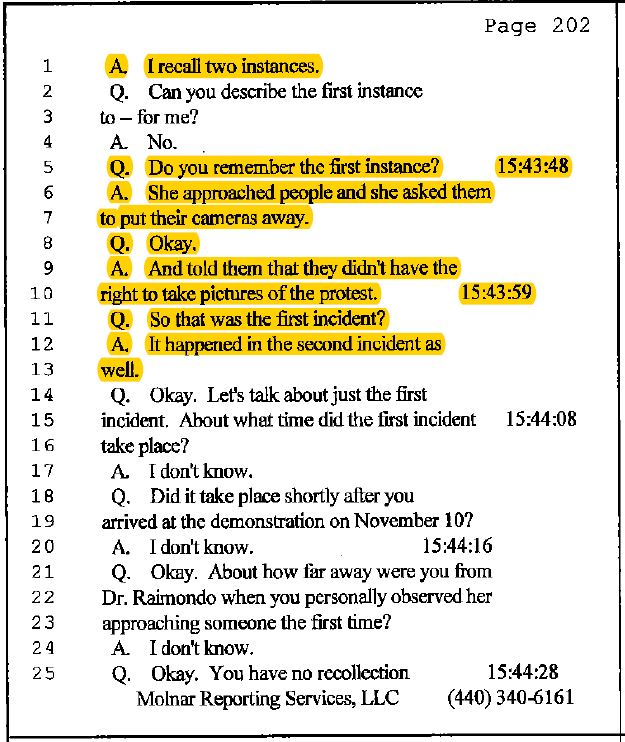 Here is an excerpt of the Order (pdf.)(full embed below)(emphasis added):

Whether or not Mr. Hawk should be compelled to answer further questions relative to his observations and interactions with Defendant Dr. Meredith Raimondo, (specifically on November 10, 2016), and student protesters when gathering information for two separate articles that ONR published is at the center of this controversy.

Mr. Hawk claims that his testimony, as a reporter for the ONR, is privileged under Ohio’s Shield Law, R.C. 2739.12 as well as under the First Amendment to the U.S. Constitution and the Ohio Constitution, Ari. I, Sec. 11.

What appears to be at issue here is Hawks answers to questions addressing his interaction(s) with Dr. Meredith Raimondo at the student demonstrations in front of Plaintiff’s bakery, his observations while present at the demonstrations and personal observations related to the alleged shoplifting incident. It appears that, initially, counsel for the parties agreed (at least in principle) as to the scope of Hawks’ deposition testimony. Defendants argue that at that actual deposition, counsel for Hawk instructed him not to answer many questions that fell within the purview of the previously agreed questioning. Upon review, this court agrees.

Clearly, the information sought by defendants from Mr. Hawk are relevant to their defense of plaintiffs’ claims. The court is not persuaded that because Dr. Raimondo is a party and some of the interactions involve her, that the information sought by the defendants is available through alternate means. Hawk is also the only individual identified by Plaintiff as having received a flyer from Dr. Raimondo at the demonstrations. Lastly, the court finds that there is a compelling interest on the part of the defendants to obtain this information, not the least of which goes to their defense of plaintiffs’ claims.

The parties are reminded that this case is in the discovery phase and the court is not necessarily making a ruling that information obtained from Mr. Hawk will be admissible, however, the court finds that Mr. Hawk should answer questions related to his personal observations and interactions while present at the demonstrations, including his discussions with individuals, including Dr. Raimondo, present at the same.

However, the court will place the following limitations on questions which Mr. Hawk may be asked at this deposition. Any questions going to the identity of sources not previously identified by plaintiffs are considered privileged. Likewise any discussions that Mr. Hawk had with his editors, i.e., internal communications, are likewise privileged and shall not be the subject of inquiry. Lastly, Mr. Hawk shall not be required to give his personal opinion as to the information that he has gathered.

This is a strategic loss for Oberlin College, even though superficially it’s getting some of what it wants.

Oberlin College’s desire to fully question Hawk about his interactions with Dean Raimondo may be a case of don’t wish too hard for something, you might get it.

When a college has lost its town, it is circling the drain.

If blacks really valued black life, they would be implementing changes in parenting and culture, and they would be much more concerned about blacks killing each other.

Instead they expend huge effort on propaganda, showing that Black Lies and Liars Matter.

And then there is the problem of blacks organized to persecute people like George Zimmerman, Officer Wilson and a long list of others. They feel entitled to violate other people’s civil rights, the evidence is there for all to see. In light of this outrageous conduct, all Affirmative Action should be ended.

Blacks violating others civil rights should be prosecuted. Since they continue such conduct the statute of limitations is constantly being reset.

If Republicans valued lives they would end Prohibition which is putting so many fathers in jail.

Putting fathers in jail and child alcohol use were two of the reasons we ended Alcohol Prohibition. Another was the number of murders Prohibition caused.

You would think we had learned our lesson the first time.

The whole modern world has divided itself into Conservatives and Progressives. The business of Progressives is to go on making mistakes. The business of Conservatives is to prevent mistakes from being corrected. Even when the revolutionist might himself repent of his revolution, the traditionalist is already defending it as part of his tradition. Thus we have two great types — the advanced person who rushes us into ruin, and the retrospective person who admires the ruins. He admires them especially by moonlight, not to say moonshine. Each new blunder of the progressive or prig becomes instantly a legend of immemorial antiquity for the snob. This is called the balance, or mutual check, in our Constitution. — G.K. Chesterton

Nothing has changed except the names of the drugs.

It’s curious why Hawk didn’t keep the flyer. Or perhaps he has it but hasn’t been asked to produce it.

Certainly not by Oberlin.

The nature of that flyer, which he can testify too, and the fact that it was being handed out by a Dean of Oberlin College, is totally damning to Oberlin’s case. And he is the only confirmed source? Oberlin should have done everything it could to have kept this guy out of the case, what a colossal blunder on the part of their legal team.

Although there’s a lot of maneuvering to go, Oberlin’s chances of winning this case are now just about zero.

“Q. And she [Meredith Raimondo] stood in front of you blocking your ability to take pictures, correct?”

If you’ve ever seen a picture of said Meredith, you’d know how sizeable that blocking was,

And that tat on her left arm really makes her even more attractive; /s/,

OFF TOPIC: the ad and recipe videos are annying. Having them follow you down the page, blocking the view, blinking, flickering, and otherwise distracting, really makes this site look cheap.

Legal Insurrection depends in part on advertising revenue to pay operational costs. Amazon killed their account,denying them that source of revenue. I suspect that obnoxious ads pay more that others.

My solution to this problem was to return to killing those ads but to also give them an annual donation of $100.

Odd you should mention that; I was mulling that over last night. Subscriptions over a certain amount kills the ads. I don’t mind ads. What I DO mind is the ads that follow you down the screen, flickering, blinking, strobing, and playing horrid sound.

Site admins: how about some sort of subscription-based setup that kills ads or at least most of them? I’ll be more than glad to subscribe; this is one of my very favorite sites.

Nwords gotta N. Gibson’s has been taken hostage by third party, unrelated heathen, hell bent on accomplishing nothing. There’s nothing in it for Soros aka BLM, nothing in it for Oberlin and nothing for Gibson. With nothing to be gained, what’s the point?

Fake News Media needs filler, Oberlin is full of filler. Just another witch hunt without a definite villain–other than the wine thieving “student”.

Bedwetter, PhD still wants to be a student 😉

Just received an alumni email from Obie about sexual misconduct issues. Haven’t fully read it, especially between the lines, but seems like a little pro-active damage control for immediately down the road.