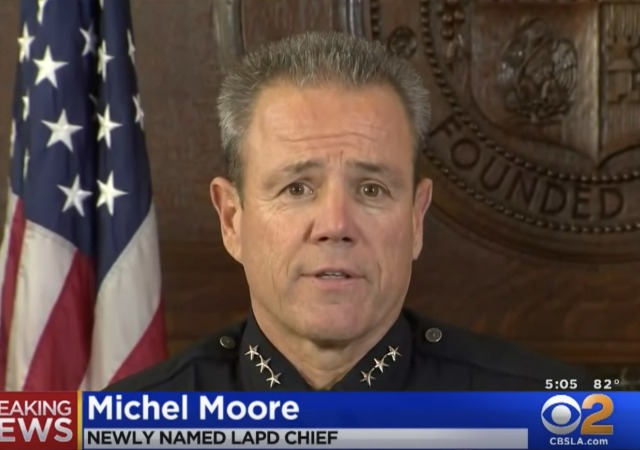 Before Michael Moore, 58, became the Los Angeles police chief, he took advantage of a controversial program called Deferred Retirement Option Plan (DROP). This allowed Moore, a veteran of the department for the past 36 years, to briefly “retire” and collect a $1.27 million pension and then get rehired.

But before that announcement, Moore had enrolled in a program called the Deferred Retirement Option Plan (DROP). DROP is a program that allows Los Angeles public safety employees to draw pension earnings without actually retiring. To do so, employees have to be at least 50 years old and commit to retiring within five years. Those pension payments go into a special account that they receive as a special lump sum when they retire. So in short: They get paid their salaries as usual during those five years of work. Then when they retire, they also get the five years of pension payments they would have received had they been retired for the five years they continued to work. For Moore, whose retirement lasted all of 30 days, that lump sum was $1.27 million.

The stated goal of the DROP program is to serve as an incentive for veterans to remain for a few more years to help pass their wisdom along to the younger folks. But what really happens is thoroughly predictable: Employees attempt to game the system with frequent medical leaves. A previous Los Angeles Times investigation found that the city had shelled out more than $220 million over nine years to people in the DROP program who had taken medical and disability leaves during these final five years. So they’re earning both their salaries and their pensions and not working. Then when the retirement actually comes, they walk away with a big, fat bonus check. Los Angeles has spent more than $1.6 billion in extra pension payments since the program began in 2001.

DROP excludes chiefs, which means Moore “would have been forced to forfeit the $1.27 million in order to take the job.” Many other chiefs lost their DROP payments due to this.

No one stepped in and stopped Moore from doing this. In fact, Moore said that “the plan to have him retire and then return almost immediately to work was proposed by former Chief Charlie Beck and approved by Mayor Eric Garcetti.” But Moore claims he did not know he would become chief so quickly after he returned since Beck made no announcement of his retirement.

The system has something called “‘the bounce,’ which allows the chief of police to bring a retired officer back for up to a year if their work is so specialized they can’t quickly be replaced.” It’s not often used but was done so in Moore’s case.

Police and fire department leaders “have very sharp pencils and they stay up all night trying to figure out how to suck as much out of the city as possible,” said former L.A. Chief Administrative Officer Keith Comrie, a critic of the DROP program.

It’s common for senior LAPD and LAFD officials to receive large DROP payments on their way out the door. Since 2008, 51 members of the departments with “chief” in their title — assistant chief, deputy chief, battalion chief — have completed the program.

Of those, six have walked away with more than $1 million, according to a Times review of city data. Their average payment was $794,000.

DROP in Dallas and Philadelphia

Other cities tried DROP, but abandoned the program due to obvious ways to scam the taxpayer. My friend Taylor Millard at Hot Air sent me this Dallas Morning News article from March about DROP in Dallas:

Six retired Dallas police officers filed the case in January 2017, arguing that the board’s decision to freeze lump-sum withdrawals from their Deferred Retirement Option Plan — known as DROP — was unconstitutional.

U.S. District Judge David Godbey wrote in his 26-page order that the plaintiffs had no constitutional claims because they ultimately “will receive every dollar of their DROP funds.”

He also wrote that the board’s decision was “certainly legitimate” because the fund “was projected to become insolvent within the next decade if the Texas Legislature and the Board did not act.”

Executive Director Kelly Gottschalk said Godbey’s ruling, signed Wednesday, was important and is “something we can build on” as the still-troubled system finds its footing.

The publication noted that “DROP threatened the entire system and drove much of the urgency for a pension fix in 2016 and 2017.” Like in LA, the veterans retired, but they kept working “while the pension checks they would have received went to an individual account” and with little restrictions, the account “grew at interest rates of at least 8 percent for years” and some of them became millionaires. The Dallas Morning News continued:

The guaranteed interest rates proved unsustainable when the system’s investments — many of which were unusual, risky and hard to sell — failed to return enough to pay for the promised benefits. The system’s previous administration tried to rein in the interest rates over time, leading to a separate, still-pending challenge in state court.

As the system’s financial position grew more precarious and the board proposed more changes to the benefits structure, officers and firefighters pulled out hundreds of millions of dollars. More money came out after Mayor Mike Rawlings publicly called on the board to shut down withdrawals.

Richard Dickson, a deputy executive director at the PPA, filed an early application to enroll in the lucrative Deferred Retirement Option Plan in June 2011, three days before Council voted to rein in its costs.

In April, Dickson officially entered DROP, at which point his pension started. Its payments go into the interest-bearing DROP account while he continues to work for up to four more years.

Established in 1999, DROP was originally sold by then-Mayor Ed Rendell’s administration as a cost-neutral way to encourage police and fire personnel to work longer and to help the city plan to replace retiring workers.

Studies by City Council and former Mayor Michael Nutter estimated that DROP had cost the city’s distressed pension fund between $9 million and $22 million yearly before Council passed reform legislation in 2011.

“It seemed like a good idea at the time. And it was a really bad idea,” said David Thornburgh, head of the Committee of Seventy government watchdog group. “But the first rule of government is, nothing ever goes away.”

As with most big city PD’s, he is just a politician wearing a uniform.

Notice how many different ways various “civil service” people and groups have managed to massage the system to get breaks, exceptions, favors, and various goodies that NO one in the private sector could even dream of.

Sam was the last honest Mayor of LA; and that was 60 years ago. BOTH parties have had grafters elected since then. This is just 1 of hundreds of examples of the corruption in LA government the last 5+ decades. I know Tricky Dick was GOP; I also know he was not honest. He did run a good place to eat!

DROP programs were initially created to keep experienced employees, usually in high risk public positions, from retiring immediately upon reaching their qualifying age or time of service. After all, dying in office means that you never receive your pension. So, the offer of obtaining up to five years worth of pension benefits, while still working, was an incentive for these experienced employees to remain on the job. If jurisdiction decides that it does not need to provide an incentive to keep employees on the job, past their qualifying retirement date, then they are free not to institute a DROP program or continue one.

But, Legislators being what they are and human nature being what it is, DROP programs were horribly abused. Legislation, which created these programs [as well as public pension programs], was often poorly written. It allowed for employees, who were qualified to receive a pension in a given area of employment, to retire and then reenter that area of employment an still receive their pension as well as a salary. Some states have changed their retirement systems to suspend pension payments and render the employee exempt from accruing additional or higher pension benefits, should the recipient obtain a job which is covered by the pension system.

Human nature simply drove some people to game the system, using loopholes in the legislation governing the retirement system. Also, these DROP programs were extended to cover employee groups for whom they were never intended; such as maintenance workers, clerical workers, judges, members of pension boards and legislators.

Louisiana does a DROP system. If it still exists when I am of an age to retire, then I will be unable to both collect benefits and work for the state. The teacher’s pension fund is actually looking pretty good, mostly because none of us make insane amounts of money here and there aren’t any ways I know of to game the system. The state person who came around this year told us that we can’t retire and take another state job or we lose our pension benefits for the duration of our new job and have to return the DROP pay.

Our only problem is keeping the police away from our retirement fund because theirs is about bankrupt. They include overtime pay when calculating retirement benefits, so cops just work a crazy amount of overtime in the three years before they lock their pension amount. An officer who lives near me retired on around 1.5x his normal pay at 20 years and now works for a city police department as well.

“It seemed like a good idea at the time. And it was a really bad idea,” said David Thornburgh, head of the Committee of Seventy government watchdog group. “But the first rule of government is, nothing ever goes away.”

Especially when it involves government employees ripping off taxpayers for millions of dollars.

Very few private sector employers still offer defined-benefit pensions. If they hadn’t already dropped them, they did so after looking on with horror as General Motors entered bankruptcy while carrying six retirees for every active employee. The ones who still do so are likely to be regulated monopolies (e.g., electric utilities) and (of course) universities.

Yet much of government continues to do so, thus creating a situation where those who will never have such pensions are taxed to pay for those who do. At a minimum, you’d think this would be politically explosive.

Even before you get to the absurdity of “retiring” at age fifty. For the average American fifty-year-old who is in good health has a life expectancy of over thirty years, thus creating a situation where one spends more years collecting a pension than one worked for it in the first place.

And that’s before one even considers those backdrop/DROP programs, or the inevitable early-retirement perk of taxpayer-provided medical insurance for those who actually do retire (inevitable because the retiree won’t be old enough for Medicare for many years).

Because, they’re our public “servants.”

SERVANTS deserves to be in quotes. Who is serving whom?