Consumer Confidence at Its Highest Since 2000

Consumer Confidence at Its Highest Since 2000

“These historically high confidence levels should continue to support health consumer spending in the near term.”

More news came out today as the research group The Conference Board revealed that consumer confidence is the highest its been since October 2000.

The Conference Board reported Tuesday that its consumer confidence index rose to 133.4 in August, up from a reading 127.9 in July. It was the highest reading since confidence stood at 135.8 in October 2000.

Consumers’ confidence in their ability to get a job and the overall economy are seen as important indicators of how freely they will spend, especially on big-ticket items such as cars, in coming months. Consumer spending accounts for 70 percent of economic activity.

“Expectations, which had declined in June and July, bounced back in August and continue to suggest solid economic growth for the remainder of 2018,” said Lynn Franco, director of economic indicators at the Conference Board. “These historically high confidence levels should continue to support health consumer spending in the near term.” 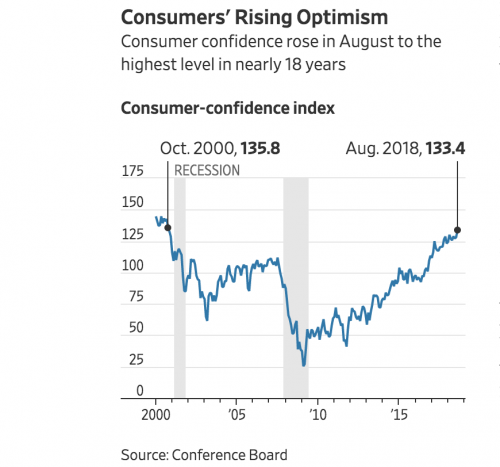 via The Wall Street Journal

Franco also said that [C]onsumers’ assessment of current business and labor market conditions improved further.” Those who believe business conditions are “good” went up to 40.3% from 38.1% while those who believe the opposite went down to 9.1% from 10.3%.

Those surveyed who believe it’s hard to find a job went down a lot to 12.7% from 14.8%. The Conference Board continued:

Factors including a buoyant job market and rising incomes are helping Americans feel better about the economy.

“Going into August, all signs were green for continued increases in consumer sentiment and consumer confidence. So that’s what we’re seeing in the headline number here,” said David Deull, principal economist at IHS Markit.

A gauge of household assessments about the present economic situation increased in August, while an index tracking expectations for the future also rose after declining in June and July.

The gross domestic product (GDP) grew at an “annual rate of 4.1% in the second quarter,” which is between April and June.

Clearly we need to fix this problem by electing Socialists in November!

notamemberofanyorganizedpolicital in reply to thalesofmiletus. | August 28, 2018 at 3:45 pm

Yes! Promises of more pain, hate, misery and death for all!

That’s the Dem’s sure fire ticket to win with!

“Target CEO raves about the state of the economy: This is the best consumer environment ‘I’ve seen in my career'”

Bear in mind that is without the many conservatives who have sworn off of Target forever because of such policies of theirs as “gender neutral bathrooms.” Target: “Hey, just go wherever you feel like going you guys!”

Target CEO Brian Cornell: “There’s no doubt that, like others, we’re currently benefiting from a very strong consumer environment — perhaps the strongest I’ve seen in my career.” “We’re seeing a great consumer response … unprecedented traffic. As we go back and look, we’ve never seen traffic growth like this.”

Anonamom in reply to notamemberofanyorganizedpolicital. | August 28, 2018 at 6:31 pm

Both that article and the photo for this piece annoyed the bejeepers out of me. Out of all the retail outlets that could be used, they chose Target. Really.

Enjoy and laugh your head off at these tools/stooges.

They Said This Day Would Never Come.

Think we’ll see it on the NBC Nightly News?