Witness saw lightning strike the bridge before the collapse. 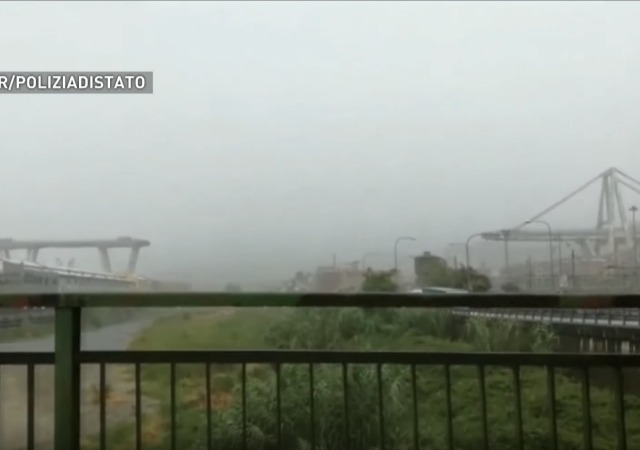 A bridge in Genoa, Italy, collapsed during a strong storm and killed dozens of people. From Fox News:

Nearly two dozen people — including a child — were killed when a raised highway in Genoa crumbled during a sudden and violent storm, sending several vehicles plunging to the ground as rescuers desperately searched for survivors.

Italian transport official said 22 people were killed and eight others were injured. The transport minister Danilo Toninelli said earlier the collapse was likely “an enormous tragedy.”

About a 650-foot section of the Morandi bridge, part of the A10 highway that connects Italy to France, collapsed over an industrial zone just after 12 p.m. local time, private broadcaster Sky TG24 said. About 20 vehicles were involved, firefighter Amalia Tedeschi told RAI state TV.

“We are following minute by minute the situation of the bridge collapse in Genoa,” Interior Minister Matteo Salvini wrote on Twitter.

Tedeschi said two people were pulled from the rubble alive as rescuers searched the scene for survivors.

The exact cause of the collapse was unclear, though a witness said he saw lightning strike the structure that caused it to crumble quickly after.

“It was just after 11:30 a.m. when we saw the lighting bolt hit the bridge and we saw the bridge go down,” witness Pietro M. told ANSA.