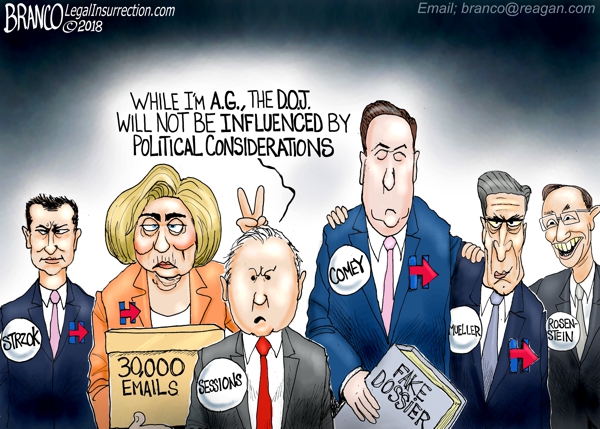 That is absolutely the way things look now. Pretty sad.

Things are not always as they seem. I haven’t given up on the AG… I think this cartoon depicts exactly what President Trump wants the whole world to believe. So that would make Mr. Branco part of the President’s plan to hoodwink just about everyone. hmmmm I wonder when he got the phone call.

That’s right, this is 57-dimensional chess instead of what it clearly appears to be!

Branco is correct. The DOJ is not being “influenced” by political considerations.

It’s being _completely_controlled_ by political considerations.

What does it say about a country when the citizens’ default assumption about it’s government is “corrupt”?

Well, the elephant in the room is that Sessions is part of the scam.
No surprise to a lot of us, but it’s about time the fact of Sessions being in on the scam has gone ‘mainstream’ among conservatives.

Has anyone given even a moment’s thought to the possibility that if Huber indicts anyone in the deep state, or if a large number of security clearances are pulled, it’s important for the AG to be outside the fray?

The latest Cohen news is it’s a dud. No impact on Trump at all.

Since the clearance pulling of Brennan, the deep state has been pretty silent. Things seem to be going pretty well from where I sit.

Mueller WILL publicly indict SOMEBODY before the election. Smart money is on Don Jr.

The goal is for Mueller to goad Trump into firing him so the Democrats can scream about it. And then Mueller is going to make some bullshit speech about how Trump is guilty but he can’t indict a sitting President and he needs Congress to get rid of him first.

This entire farce has gone on for a year too long. Sessions is a fucking coward that should have resigned instead of ‘recusing’ himself.

One way or another the week after midterms Sessions is getting fired.

I hope you are right. But even if that’s true, it is still a great cartoon. Sessions has to realize that from where we sit this is exactly how it looks.

Also, you have to have some kind of supernatural faith to believe in justice after everything we’ve seen. At this point, it just looks like gullibility.

Sessions has that “Dazed and Confused” look…..Has he been into a little Led Zepplin.

one of my all-time favs by them…..

If Sessions is a “good” man as many are saying then he should send in his resignation. If the man you work for has no faith in you – then you cannot do the job.

Oops – got so interested in the topic I forgot to say that I thought it was another fantastic Branco cartoon. Which I do.

Yes, Sessions is a ‘good man’ – if you’re hillary klinton.

Love it! Sessions – shortest person in the room – looks like Mr. Potato Head. And the rabbit ears! Hahahaha!