“This suspect opened fire at a crowded public park, this could have been so much worse.” 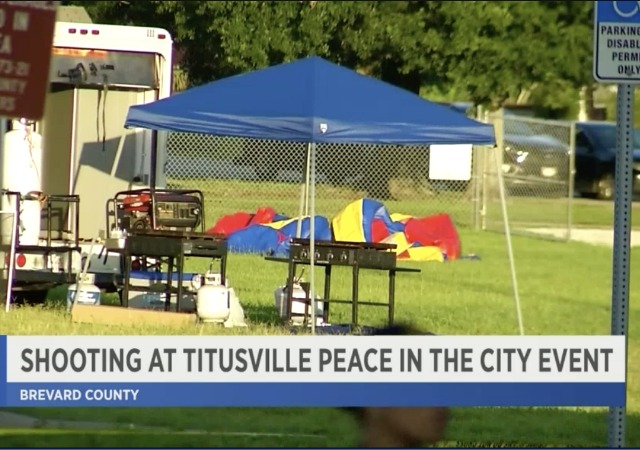 We won’t see this plastered all over the MSM, will we? An armed citizen stopped a gunman at a back-to-school event in Titusville, FL. Officials admitted it could have been a lot worse.

A man opened fire on the event, which took place at the Isaac Campbell Park. The gunman got into a fistfight at the park, left, and came back shooting.

The licensed bystander quickly opened fire on the gunman, who “was taken to a hospital with life-threatening injuries.” From WFTV:

The bystander who shot the man waited for officers and was cooperative with the investigation, police said.

“We are extremely grateful that nobody else was injured in this incident,” said Deputy Chief Todd Hutchinson. “This suspect opened fire at a crowded public park, this could have been so much worse.”

A flyer posted on Facebook and Instagram said a back to school event called “Peace in the City” was going on at the park at the time of the shooting.

About 100 people attended the rally, which also gave away backpacks filled with school supplies for children.

Detectives consulted with the Florida State Attorney’s Office and “they do not expect to file charges against the bystander since his actions were within the law.”

Dwight Harvey described the shooting to the media:

“I was like, who lit firecrackers? I turned around and just said, ‘Oh no, he’s got a gun, he’s got a gun,’” recalled Harvey, the DJ whose family organized the back-to-school event Saturday at Isaac Campbell Park in Titusville.

“I thought to myself, ‘did this just happen?’ People were taking cover, everybody was scattered,” said Harvey, who told children amid the screams and chaos to run. Sunday, Harvey said he was thankful that a private citizen was in the right place at the right time to quickly end what could have been an even worse situation.

“This was standing your ground, in a situation like this with kids involved, not what you saw in Clearwater, that was murder,” Harvey said, referring to the controversial shooting in July that left a man dead after a fight over a handicapped parking space.

The ‘licensed bystander’ needs to be sentenced to target practice. He ALMOST did an excellent job. Thank God he was there.

He domed the guy what else do you want? BTW you seen this guy’s picture? He’s a real winner. Name’s Khallid Tazmaine Highsmith.

Oops I should have looked closer that’s a different shooting.

Thank you for the correction.

We have been assured by the greatest minds in the Left that:

Obviously (according to the Left) this event is the exception to the rule.

As one Kansan to another, I believe you’ve made an error in your post: it appears to posit the existence of “great minds” on the Left. Remember, these are the same “great minds” that assured us that Hillary Clinton moving into the White House on January 20, 2017 was “inevitable”, perhaps even ordained , and that there was not one chance in Hell that Trump the Clown could be elected!

(Or was that just a spelling error? It’s sure many of her sewer-rat campaign staff had “grate” minds!)

He said “greatest”, which is a comparison. “Great”, unmodified, is an absolute. In this case, “greatest” means “less unhinged than usual”.

Yet the Left wants to restrict concealed carry to be sure this happens. Undergo the same level of advanced training in use of deadly force… legal and range work… as SWAT and watch the Left go nuts… this was one of the reasons for refusing CCW in a SoCal city years ago.

Notice all of the national coverage of this heroic event? Yeah, neither did I.

Nor is there any mention of the 63 shot and ten killed in Chicago just this past weekend.

Chicago? Just gangland Prohibition murders. Nothing we didn’t see 1920 to 1933.

Yeah, and also it has to be noted that it was done on what the city of Chicago has formally declared as Barrack Obama Day. So the activities were just the appropriate celebrations and nothing to be concerned about.

First responder. Perhaps we should include self-defense courses in our base curriculum. A driver’s ed for the Second Amendment. Then again, most parents do well enough to train their children in the art of life.

If it’s black on black it doesn’t fit the narrative and the story has to die.

I think we should give back Florida to Spain.

Only if they agree to take California as well…

Meanwhile the Leftist Media did their own shooting spree today.

This was standing your ground

No, it was not “standing your ground”. It had nothing to do with anyone standing their ground. It was a straightforward case of defense of others, and the result would have been the same in all states, even the strictest duty-to-retreat ones.

This should be obvious: Even if it could be established that the responder was able to retreat safely, the others he shot to defend were not. Therefore in every state he would have had the right to shoot.

The right to shoot but not necessarily the ability to carry the gun – certainly depending on the status and location of the park. In some states he may have been charged for possession of the gun despite not being charged in the shooting.

This was FLORIDA – with a pre-emption statute where carrying in a park (as long as it was not on a school grounds proper) is legal – regardless of municipality.

Also – Milhouse is absolutely correct, in that – the civilians response was 150% legal under florida law regarding “Use Of Deadly Force” laws, with regard to forcible felonies – and had ZERO to do with any SYG statute.

An armed citizen has the right to intervene (under florida statute) in the face of a forcible felony, even if he is NOT THE IMMEDIATE VICTIM.

New Jersey springs to mind, in my non-lawyer head.

It does bring up the point. Do we have states in which it is legal (even if rather difficult) for a normal mortal (Non-Law Enforcement officer) to carry concealed, and yet be breaking the law if some individual nearby begins to shoot people while *not* pointing their gun at the subject, and yet the subject shoots the shooter?

I suspect the answer is “Yes, but…”

“Self defense” is shorthand for “defense of self or another.”

The answer is “no”. Even in New Jersey, where he might be charged with carrying the gun, he would not be charged with using it, because that was clearly legal. And if I were on the jury I would find that the fact that the gun ended up being used to save someone’s life retroactively justified its carriage despite the law.

But the man is a professional DJ, so he must know what he’s talking about.

As of this moment, a Google search for “CNN Florida Shooting” found nothing about this incident.

“All the news that we want you to hear about…” that about sums the leftist position.

No name of the protector of the innocent. Presumably this was at the hero’a request, and that request was honored by the local police and press.

Everyone is far too aware of the threat of harassment by Democrats.

If anything, the citizen should be admonished for not putting enough rounds in center mass of the scumbag.

I’d suggest a local shooting range offer him free tactical shooting training so the next time he can put lead downrange with a higher degree of accuracy.

Short of that, thanks citizen. Take a bow and I sure as heck hope your neighbors NEVER let you buy another drink.

The action taken by the licensed carrier was both lawful and the reason that we carry firearms to begin with.

That the attacker did not immediately die from his wounds is quite normal, when shooting for COM with a handgun. Unless you run a Mozambique drill [2 to the body, 1 to the head] anyone that you shoot has a good chance of surviving, especially in an urban or suburban area. You can only lawfully continue to use force until the person is incapacitated. A coup d’ gras is not permitted, under the law.