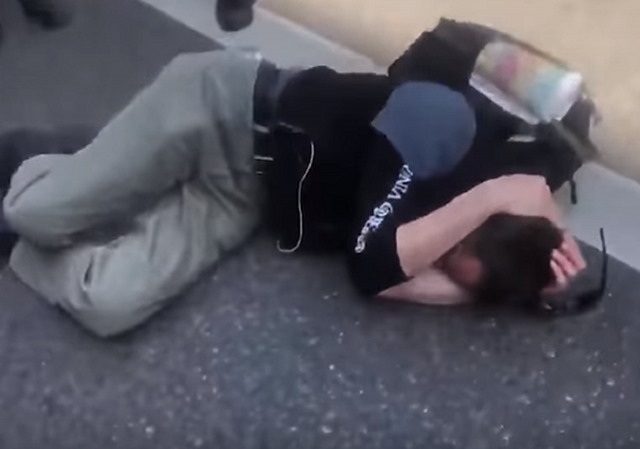 Antifa descended on Portland, Oregon recently to protest a right wing rally. One of the protesters who joined them happened to be carrying an American flag. Before the day was over, he was clubbed in the head by another member of the protest.

He brought an American flag to protest fascism in Portland. Then antifa attacked him

Paul Welch came to the downtown protest Aug. 4 to let his political leanings be known.

With pride he clutched his U.S. flag as he moved among the crowd of like-thinking demonstrators.

Soon a group of black-clad anti-fascist protesters, also known as antifa, demanded he lose the flag, calling it a fascist symbol. Welch refused, and a tug-of-war ensued.

It ended with Welch taking a club to the back of the head, lying on the ground in a pool of his own blood.

Only Welch was not a Proud Boy, a Patriot Prayer supporter or among the other conservative activists who descended into the area that day, many from out of town.

Many have assumed the tussle over a U.S. flag placed Welch squarely in the right-wing camp.

“I had felt like showing that a liberal, free Portland or any major city, really is much more American and much more numerous and strong than any of these interloping groups,” he said.

A “slightly progressive leftist” by his telling, Welch is a registered Democrat in Oregon, voting records show. He cast his ballot for Bernie Sanders in the 2016 presidential primary and Hillary Clinton in the general election, he said.

In the short video below, you can see people trying to take his flag. At the 13 second mark, a man uses a black club to hit him in the head, at which point he collapses into the street while bystanders do nothing.

Welch was eventually rushed to a nearby medical center where four staples were used to close a three inch gash in his head. The report closes with this quote:

“It strikes me as the worst sort of political theater,” he said of what happened to him. “It’s kind of like you’re playing into your opponents’ hands when you do that sort of thing. That’s not what I was there for.”

On a related note, has everyone seen this 2017 tweet from CNN’s Chris Cuomo?

Beat me to it!

I do hope that the police can track down whoever struck Welch in the back of the head. That was assault with a deadly weapon and it needs to be prosecuted every chance we get when it comes to these antifa thugs.

I still think that Antifa needs to run into some real bad asses. It would be poetic if we started seeing media displaying injured Antifa members being hauled out on stretchers.

EMS be earning their pay that day when/if it ever happens.

Doesn’t even have to be “badasses”, any normal person can take them.

They’re mostly made up of mama’s boys from colleges. The type of SJW that will end up slinging coffee at Starbucks because they couldn’t get a real job with their grievance-studies degree.

Just look what happens whenever anyone takes one of their masks off. Their ‘courage’ dissolves faster than toilet paper circling the bowl.

You want a badass? How about the dude who punched an antifa so hard, he sent him flying on his back with just one punch?

Look for “Portland Antifa Soy Boy Knocked Out in One Punch Riot” on YouTube.

For a video with better quality, look for “Antifa One Punch”.

The dude at the beginning of the video seems to be the same as 0:58.

I enlarged the video and watched it several times; it appears the ‘deadly weapon’ was an umbrella. It was still an unprovoked attack but not as bad as it could have been if it really had been a heavy club vs an umbrella.

The flag triggered them.

I suggest an alternate headline:

“Watch a Bernie bro change to a Trump voter live!”

Unfortunately that is less, rather than more, likely. Possible as he claims he is only a slightly “Progressive Leftist”, but he’s still a Leftist.

But you can bet he is now anti-antifa.

Maybe, hopefully. At the very least perhaps Mr. Welch will exercise a bit more caution and thought before going out to any more of these protests.

The exact moment an SJW became a Trump voter:

It would take a heart of stone…

Mrs Welch is what as known as a ‘useful idiot”. They all believe that they will be the ones in charge or cozying up to those they helped take charge after the revolution but in fact, will be the ones that are disposed of first.

Clubbing someone in the back of the head seems like attempted murder. Shouldn’t be long before these antifa thugs start catching lead.

Hmmm. Mr. Cuomo, I thought it was the Italians that took that fascism idea and ran with it.

Clearly, these easily triggered mobs or rioting cellar dwellers should be prosecuted to the fullest extend of the law. Too bad we have liberal judges armed with overcooked spaghetti with which to slap them across the wrists…

“Welch was eventually rushed to a nearby medical center where four staples were used to close a three inch gash in his head.”

I hope he has a full recovery.

This is obviously commie on commie violence. Has Chuck Schumer(D) or Nanny Pelosi(D) issued a statement denouncing this violence, yet? If not, why not? Isn’t that tacit approval of antifa violence against one of your own? Explain yourselves, Democrat leadership…

I love how the brave antifa warrior at first gives him a spanking, then gets really brave and hits him on the head.

Then bravely runs away!

They had the breakdown of the weapon that was used on him. It was an umbrella but ti had a large metal nut attached to the end. The whip action of the umbrella actually increases the force that the nut hits with. It’s from early trench warfare techniques where they found a weighted club needed to be wielded by a strong person and even then it was a slow attack weapon because of the weight. So they would put hammer heads on strong springs mounted to handles and hitting someone with a whip like strike would cause more damage then the weighted club. He was whipping his legs to try and get him to lower his hands so they could snatch the flag, when that didn’t work he popped him on the back of the head. It’s a very innocent looking weapon but can be used to crack a skull when used properly (improperly)

Thanks for the description. Antifa will kill someone some day – probably soon. Nuts on the end of umbrellas, bike locks…. These are lethal weapons within the legal meaning of the phrase.

Does the attempted murder of 32 Republicans at a baseball game count?

polezei (in mid to late 80’s at least) used to use spring loaded batons. no real weight difference over length but did provide a whip action too. was fairly stiff spring so no loss of real rigidity but joke was they hit you once the baton hits you 10 times.
mp in us army then.

cry me a river. the tears are NOT flowing down my face.
antifa should have finished him off but….as always….people like them cannot be trusted to finish any damned job.

These people have a lot of time on their hands.

“I had felt like showing that a liberal, free Portland or any major city, really is much more American and much more numerous and strong than any of these interloping groups,”

My bet is there will be no prosecution for this crime, or if there is the charges will be minimal, like the incident at Berkeley.

So will he file charges against his fellow Antifers ? Didn’t think so.