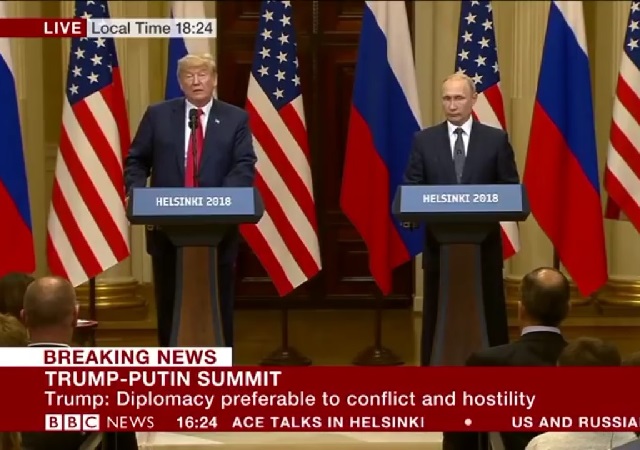 Berkeley is the one place you would almost expect to engage in this sort of rhetoric.

A political science professor at UC Berkeley says that President Trump’s recent press conference with Russia’s Vladimir Putin in Helsinki, Finland is an example of his “textbook treason.”

M. Steven Fish also claims that “in the last 18 months Russia made more progress” toward its goal of destabilizing NATO and other US alliances than in the entire last century.

“We cannot just sweep this under the rug and go on to the next outrage, because Trump is a master at doing that,” Fish told Berkeley News. “This matter is immeasurably more important to the future of the country than any other.”

Professor Fish notes that while the United States and China “are adversaries in some ways,” China — unlike Russia — does not “try to sabotage American institutions.” He blames President Trump and congressional Republicans for not doing enough to best Russia at its own game. “Shockingly,” Fish says, “that willingness is not there at this time.”

As for Putin, Fish says the Russian leader”never dreamed” he would ever have this easy with any US president.

This is textbook treason. This is what treason looks like. The fact that it’s been so brazenly committed, and on an ongoing basis over a two-year period, is blinding. If this were a little bit less public and we dug what Trump is saying out of some secret documents we’d be exclaiming it: “Oh wow, this is treason!” But this is so brazen and it’s been so obvious for so long, that we have become accustomed to just keep shaking our heads and turning away, denying that this can be happening.

I didn’t know you could betray a textbook.

Wow, Trump’s awesome mind-control powers can even make a Berkeley professor finally show some concern about treason. That guy can do anything—at least when he’s lucky enough to have such feeble opponents.

As for Putin, Fish says the Russian leader”never dreamed” he would ever have this easy with any US president.

Actually, the danger point was the Obama era. Obama was so feckless about foreign affairs that if Putin was more dynamic—something like Nikita Krushchev—he’d have used the eight years when the US wouldn’t do anything more useful than lay down useless “red lines” to establish solid Russian control over pretty much all of Europe and the Middle East. (Not that Russia is terribly strong … but it’s stronger than Europe and the Middle East.) Fortunately for us all, Putin is a cautious man, and now his Obama-era chance at a free hand is gone.

All UC Berkeley professor M. Steven Fish has confirmed is that it’s really true that “a fish rots from the head down.”

The textbook he’s using is obviously not the constitution.

The very same people who talk about violent insurrection, staging a military coup, a “resistance” movement, shutting down wall street, and overthrowing capitalism, and who have never failed to praise Che or Castro or Stalin, find Trump’s meeting with Putin to be Treason? Excuse me while I go barf.

um..Textbook ? The Constitution defines treason as such:

“Treason against the United States, shall consist only in levying War against them, or in adhering to their Enemies, giving them Aid and Comfort. No Person shall be convicted of Treason unless on the Testimony of two Witnesses to the same overt Act, or on Confession in open Court.”