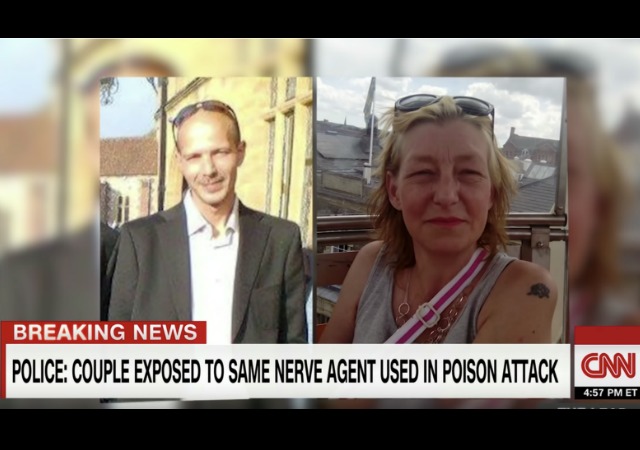 Two Britains fell ill four days ago after an exposure to the nerve agent Novichok, the same agent that almost killed Russian ex-spy Sergei Skripal and his daughter Yulia.

The British government blamed Russia for the attack on the Skripals, but authorities don’t have any evidence as of now to show them why anyone would target Charlie Rowley, 45, and Dawn Sturgess, 44.

Before they collapsed, the two had spent time in the Queen Elizabeth Gardens in Salisbury, which is a short walk from where the former spy and his daughter lost consciousness. Officials cordoned off the area on Wednesday, along with several other places, including a trash bin outside the John Baker House, an assisted-living center in Salisbury.

A friend who was with Mr. Rowley and Ms. Sturgess on Saturday said that their condition rapidly deteriorated, with symptoms that included pinpoint pupils, seizures, frothing at the mouth and hallucinations.

The police said on Wednesday that they did not know whether there was a link between the new case and the poisoning of the former spy, Sergei V. Skripal, and his daughter, Yulia. Britain has accused the Russian government of being behind the earlier attack, a claim Moscow denies.

“The Counter Terrorism Policing Network is now leading the investigation into this incident,” Neil Basu, an assistant commissioner of the Metropolitan Police who oversees counterterrorism operations, announced on Wednesday evening. About 100 detectives are working on the case, along with members of the local Wiltshire Police.

At first, authorities thought the symptoms had to do with heroin or cocaine since “Rowley is a registered heroin addict.” But that changed when the two fell into a coma and they discovered Rowley and Sturgess “spent several hours in the vicinity close to where the Skripals were poisoned.”

Rowley and Sturgess could be collateral damage. It’s possible they became exposed to Novichok “after it had been discarded by the would-be assassins targeting” Skripal and his daughter.

Russia has denied responsibility for the attack (anyone shocked?) according to The Washington Examiner:

“This is very disturbing news,” spokesman Dmitry Peskov said, according to Tass, Russia’s state-owned news agency. “[W]e have no information on what substances were actually used and how they were used, because here it is very difficult to rely on any media reports,” he added.

UK Security Minister Ben Wallace has encouraged Russia to help with this attack:

Peskov said Russia has denied any involvement in the first incident, and said Russia offered to help UK officials then, but never heard a reply to that offer.

“TOf [sic] course, it triggers profound concern in connection with the similar incidents in the UK,” Peskov said in response to reports of a second attack. “We wish them a speedy recovery.”

I keep saying, the only reason this is news is because of Muh Russian Collusion to Steal The Election narrative that the media is desperate to breathe life into.

Deadliest Soviet era nerve agent EVER, ya’ll. Except the other two lived? And these two… aren’t dead yet? I’m sorry, but no. There is no way a military-grade nerve agent is survivable , after being freaking ingested!.. As if these regular old hospitals immediately test for nerve agent and treat. No.

Tell me.. a thought experiment. Say these folks had been bitten by rattlesnakes. Could the anti-venom get to them in time? Maybe.. cause they’d KNOW they’d been bitten by rattlers and they’d have bite wounds. Still, I bet there is no antivenom in the UK.
But these folks present symptoms and no “bite”, so my point is.. time elapses. And the nerve agent was eaten or drank?? This whole Russian poisoning thing is like what rdmdawg says above… convenient to one thing.. muh Russian collusion and to hamper the talks just announced. No way this is nerve agent poisoning.

I will predict that this poisoning will lead to a postive ID of the perp, and the source of the poison. Reason is that these victims are so obscure, and of no public interest. Possibility 1 is that this was an accident, the perp was not careful with his goods, and the exposure will be easy to track if that is the case. (He must live in close proximity to the victims) Possibility 2 is that they WERE intentionally targeted, but for people who had no public personae, there is only going to be a relative handful of people who could have had enough of a grudge against them to want to kill them this way. Again, this shouldn’t be hard to track.

Good points Tom, but still, the nerve agent stuff makes no sense. It’s hard to handle, and somehow not fatal. Is it degraded? I don’t know. Those first two were the first ever to survive. That makes no sense. I question the lab and British intel that are making these claims…

Clearly, a less than immediately lethal dose. Untreated, they may still have expired. Perhaps the stuff is very persistent and these two came into contact with residue from the first attack. There’s not much unclassified information out there about this class of nerve agent. These folks were near where the Russians fell sick.

Nice background on Novichok agents and others

Thanks venril. Buttresses my point well. Great link. It is so improbable to have a nerve agent ingested and yet, somehow the person survives… and does so after treatment would be delayed awaiting test results to figure out what was wrong. IF someone was exposed to a real nerve agent, ( just like the snake bite ) you do NOT have many hours much less DAYS to start treatment. No. This whole thing is so improbable… b/c these people survived.

Two “Britains”? I believe the term is “Britons”.

Oh sure, it’s the Russians. With the deadliest nerve agents ever. And an intelligence net that has yet to be entirely unraveled. And collateral damage from a sloppy hit.

I meant to hit reply, and would have up voted, sorry for down vote.

Russia is perfectly capable of targeting others in order create deniability.

I am not defending Russia, but as with the first case, it just seemed odd about the absolute blame being cast on Russia, it being refuted by Britain that anyone else could have manufactured the nerve agent, even though other sources said it was very possible for others to make this stuff, and it lead to Russia getting sanctions against it.

One reason I felt it as odd was why wouldn’t the Russians have used a definite means of killing people with plausible deniability rather than something that would be traced back to them. Plus, it was messy, not well targeted as you would suspect, and it didn’t do the job.

I wouldn’t put any past Putin, if there were justification in HIS mind, but now we have this, which just is plain odd.

It just seems there was a true rush to judgement and shutting down other legitimate avenues where it could have come from. Why? It seems more political in nature, and seems like a bizarre thing for Russia to be behind in so blatant a manner.

I think technically it should be two Britons and not two Britains.