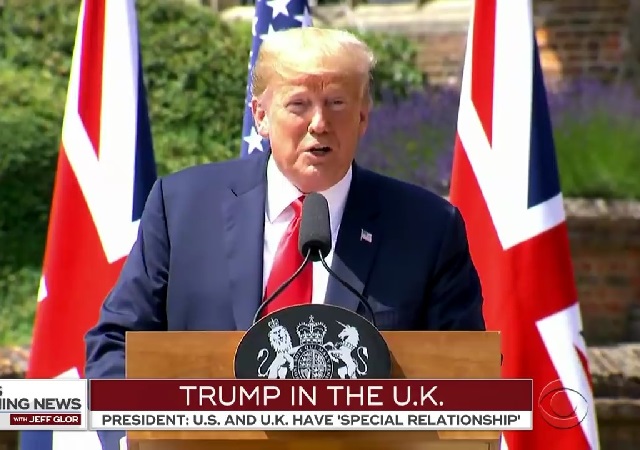 President Donald Trump’s week-long Europe visit not only provoked a ‘day of rage’ from leftist demonstrators in London, it also triggered mainstream German media and liberal politicians, with the former German Vice-Chancellor Sigmar Gabriel even accusing the U.S. President of striving for a ‘regime change’ in Germany.

Gabriel, who served as Vice-Chancellor and Foreign Minister in the previous Merkel cabinet, told German weekly Der Spiegel that “America led by Trump can’t be trusted. [Trump] gives guarantees to the North Korean dictator and at the same time wants regime change in Germany.”

Gabriel, however, failed to explain how he came to this outlandish assumption.

On Wednesday, Trump kicked off a week-long tour of Europe by criticizing Germany’s multi-billion gas pipeline deal with Russia. “They pay billions of dollars to Russia and we have to defend them against Russia,” he said.

The ensuing response of the mainstream German media was almost hysteric. “Trump begins his EU trip with a verbal attack on Germany,” reported the news network N-TV. “The mightiest military alliance is in crisis: Trump’s unpredictability puts NATO partners in an ordeal–and confront them with the question: how much dispute can the alliance bear?”

“Germany rebuffs Trump” over NATO defense spending, reported the German tabloid Bild, “[Merkel’s] spokesman Steffen Seibert made it clear on Friday that government will not accept new [financial] obligations during the current NATO summit.” The tabloid, however, admitted that there were “divergent views” on the issues within the German ruling coalition.

“Trump takes aim at Germany and NATO,” said the German weekly Der Spiegel in its editorial. “Trump turned this week’s NATO summit into a showdown with Germany and its chancellor.” The magazine argued that “the U.S. president seems to view Germany with a mixture of jealousy, admiration and anger.”

Der Speigel hailed the German Chancellor’s standing in the U.S. media landscape, arguing that “the liberal American press that Trump so despises has championed Merkel as its heroine.”

The magazine, however, failed to mention Merkel’s tanking poll numbers at home. According to the last month’s nationwide survey published by Der Spiegel, the German Chancellor was now “more unpopular than ever.”

Most of the German news outlets ignored Trump’s remarks on Europe’s deteriorating migrant situation, focusing instead on his disagreements with UK Prime Minister Theresa May over her handling of the Brexit negotiations.

At a joint press conference with May on Friday, Trump particularly mentioned Germany as he warned European leaders to “better watch themselves” as mass immigration permanently changes the continent for the worse.

“I think that has very much hurt Germany, and I think its very much hurt other parts of Europe. And I know its politically not necessarily correct to say that, but I’ll say it — and Ill say it loud,” Trump told reporters.

German newspaper Süddeutsche Zeitung backed Trump on Germany’s meager defense spending, saying that “criticism of German defense policy is in essence correct.” The Süddeutsche Zeitung argued that it was Germany that found itself isolated at the NATO summit and not Trump. The U.S. President’s comments were met with ‘silent approval,’ the newspaper noted.

In Germany, a dangerous sluggishness has engulfed the security policy. This extremely peculiar view of looking at threats, deterrence and [defense] procurement and the significance of military as a constructive component of the external defense; is shared [only] by a minority in the [NATO] alliance. This is the reason why the critical remarks made by the President could have devastating impact. They trigger a silent approval, and reinforce the perception that Germany has known since the euro [monitory] crisis: the Federal Republic as an egoist economic superpower that seeks commercial advantages at the cost of others. [Süddeutsche Zeitung, July 12, 2018; Translation by the author]

Support for Trump’s stand on NATO defense spending also came from elsewhere in the German-language press. Leading Swiss newspaper Neue Zürcher Zeitung ran a front-page editorial Saturday with the headline “Where Trump is Right.” The editorial said that “Europeans fear that the West is breaking up and blame the US president for it. They themselves display lack of solidarity and hypocrisy when it comes to the most important Western alliance, the NATO.”

While former Vice-Chancellor Gabriel did not elaborate on his view that Trump was going to ‘change the regime’ in Germany, the US President may have unintentionally created yet another schism in Merkel’s fragile coalition.

“German government feuds over military spending increases after NATO summit,” reported the German broadcaster Deutsche Welle. “Chancellor Angela Merkel’s conservatives want more money for Germany’s military. But their Social Democratic coalition partners have pushed back, warning that Germany should not cave into demands made by Donald Trump,” the broadcaster said.

Last month, Merkel survived a government collapse over her unpopular open-door migrant policy. Trump’s NATO spending demands are causing yet another stir in that china shop.

Having watched the uninterrupted Obama apology tour for eight long years, Merkel and the ruling German establishment continue to have a tough time coming to terms with Trump.

Get our military out of Germany. ASAP.

I absolutely LOVE that last statement: “Having watched the uninterrupted Obama apology tour for eight long years, Merkel and the ruling German establishment continue to have a tough time coming to terms with Trump.”

Bravo! Wraps up well what we are seeing in Merkel.

Doncha’ miss the days when the former President would bow and grovel before every petty dictator? /sarc

Advice to Germany: Pay your fair share of NATO, drop the EU tariffs, straighten up and fly right. You can also field a better soccer team for the next World Cup.

Hey Sigmar baby. I’ve got a hot tip for you. Trump may (or
may not) want regime change in Germany. But Frau Merkel is going to manage that her own sweet self. Her policies have been a disaster for Deutschland.

Poland wants the US Military.

Priceless. The European “elites” never miss an opportunity to remind us how much more enlightened intelligent and sophisticated they are. Almost always from a living room stuck in 1970s American Lower Middle Class Retro.

And now the will follow the likes of CNN’s Acosta over the cliff of Trump Derangement Syndrome.

“Sheathe your sword before impale your soul upon it!” – Beckett

“the U.S. president seems to view Germany with a mixture of jealousy, admiration and anger.”

Very artful wording there. As I understand it, the friction point is Germany’s old financial obligations, not new ones.

While you’re about it ,how about a regime change in Canada?

But it’s fun to be lectured by a metrosexual clown who’s eyebrows randomly fall off!

Poor Trudeau. He tried to be so serious. Shrinked in the corner until Trump left, then held a strongly worded press conference that was overshadowed by fake(?) eyebrows coming unglued. What a metaphor.

I keep saying that if Reagan was the Teflon President, Trump is the Vibranium – attacks just rebound back at the aggressor.

Trudeau has been upset ever since he didn’t make the NHL, as a Dallas Stars Ice Girl.

For the last 35 years, the West, including the US, has been ruled by the globalist elite. The sole goal of these people is to maintain their position and wealth by reducing the power of the masses through redistribution of wealth. Interestingly enough, even the leadership of communist countries amass far more wealth and enjoy far greater benefits than do the common people.

In 2016, the rank and file of the most powerful nation on the planet, the USA, rose up and elected a man who promised to stop their enslavement by the globalist establishment. And, that man is doing exactly that. So, it is no surprise that the representatives of the global establishment attack this man. If their own citizens wake up to their predicament, there will certainly be “regime change”.

What Germany wants stopped mattering the day the started World War II. Our troops in Germany serve a second role: preventing more childish mischief from a culture that started the deadliest war in human history. The Germans no longer have a full seat at the big boy table.

1860-1945 Germany menaced the Western world. Everything the Teutons touched turned to blood and gore. And now they turn their business back to Iran? How does that work out for the better – other than lining the pockets of German oligarchs and EU autocrats.

Yes, but will it matter so long as Germany and France are taking them in? A hell of a lot of weapons are being smuggled into Europe (presumably being stored in the mosques Europe’s governments are afraid to investigate). They must have a purpose. I’d bet that Turkey could easily take Greece and the Balkans (especially since a lot of it is already Islamicized) with a couple million armed Turks in Germany and various other brands of Muslims in France acting as the anvil to their hammer. At that point they’ve split Europe down the middle, isolated Spain (which seems quite ready to throw away Isabella and Ferdinand’s final expulsion of the Saracens and bow down to Islam), and squeezed Poland, the Czech Republican, Slovakia, Hungary, and Romania between themselves and Belarus/Ukraine.

Germany continues to seek dominance in Europe, only the weapons have changed.

All imposing their peculiar versions of culture on the western world. F’n Hun. Either at your feet or at your throat.

I was reading something about Ukraine and how Germany sold them out at Minsk II. Welll, in that article the author noted how German intellectuals prefer Russia over the US. I think that bit is the well concealed dirty secret.

I wasn’t too surprised by that revelation – mainly because there’s been a especially significant faction of anti-American sentiment since our administration of the American zone of occupation following WWII.

The same thinking applies to British intellectuals of the Oxfordian pedigree and the post WWI American-UK alliance.

Knowing what they all know about Russian behavior throughout the 20th century just doesn’t seem a moral or ethical concern to them. I imagine they wear “I <3 Kim Philby" shirts in the rooms at Kings. And dontchaforget – boys of the "public school" character all think alike.

also the majority of the ‘effective’ leadership in the German government came like Merkel (propaganda minister) from East Germany.. by ‘effective’ I mean Not the Greens and pure Socialists.

The same might be said for a large number of Germans.

Why so many of us like Trump – straight talk, no pussyfootin’ around:
“I think that has very much hurt Germany, and I think its very much hurt other parts of Europe. And I know its politically not necessarily correct to say that, but I’ll say it — and Ill say it loud.”
He says things that someone in a position of authority has to say and he doesn’t mind becoming the lightning rod.

I’m working on the first draft:

President Trump: We saved Europe from Germany. We saved Germany from the Soviets. But we can’t save Germany from itself. Effective immediately, I am ordering the withdrawal if all US military personnel and equipment… blah blah blah

“Merkel you smell of elderberries”

Donald Trump is the greatest thing to happen to America since Lincoln – maybe even Washington.

Well, it’s nice to see the Germans won’t be threatening any nearby countries with their massive military. I think a troop of Boy Scouts could take ’em in their current state.

The bad part is it would be a troop of *Russian* boy scouts.

We pay how much to defend these wonderful people again?

The Germans want American troops to by them cheap cigarettes and booze at the PX.

What is in it for us to pay for Germany’s defense?