Trump Remains Committed to NATO, ‘Unnecessary’ for U.S. to Withdraw

Trump Remains Committed to NATO, ‘Unnecessary’ for U.S. to Withdraw

“I believe in NATO.” 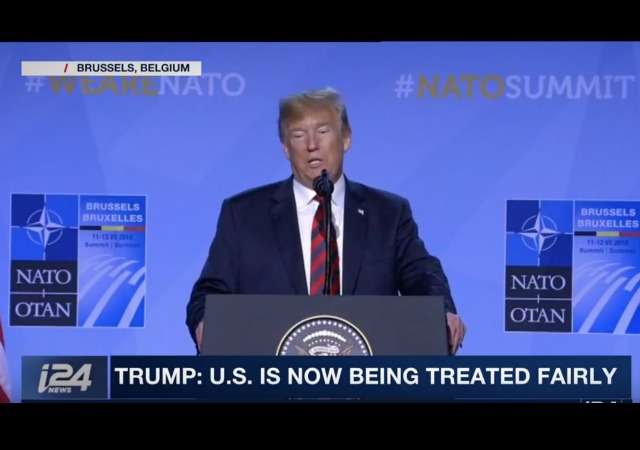 President Donald Trump ended his time in Brussels, Belgium, by declaring his commitment to NATO and finds it unnecessary for the US to withdraw.

NATO members held an emergency meeting on Thursday to address Trump’s concern that they’re not pulling enough of their weight when it comes to defense spending. Trump touted in an impromptu news conference before his departure that the members reached an agreement.

Trump told the media he let the other member know he is “extremely unhappy with what was happening,” but left the meeting after “they have substantially upped their commitment.”

The meeting obviously satisfied Trump because he pronounced that before America “was not being treated fairly, but now we are” and he believes in NATO.

The president said he told allies in a “firm manner” that he was “extremely unhappy with what was happening.” In response, he said NATO members had “substantially upped their commitment.” Officials for NATO countries said they hadn’t changed their military-spending plans but said they told the president they were open to discussions to increase spending in the future.

German Chancellor Angela Merkel told reporters following the emergency session that it had been a “very intense summit” with “very serious discussions.”

“The U.S. president demanded what has been discussed for months, that the burden sharing changes,” she said. “I made clear we are on this path and that this is in our interest and that it reinforces us mutually.”

Trump insisted he wants the spending goal to be 4%, but is for now focused “on bringing allies to 2% first.” From The Washington Examiner:

“What they’re doing is spending at a much faster clip,” he said. “They’re going up to the 2 percent level.”

“After we’re at 2 percent, we’ll start talking about going higher,” he added.

“I said ultimately, we should be in years in advance, we should be at 4 percent. I think 4 percent is the right number,” Trump said, noting that the U.S. is already spending at least that much.

Rhetoric swirled around that Trump wanted to withdraw from NATO, but sources close to the meeting and Macron all said that Trump didn’t threaten to leave the 69-year-old alliance.

A member of the media asked Trump about leaving NATO. He articulated that move is “unnecessary, and the people have stepped up today like they’ve never stepped up before.”

It’s as if he knew what he was doing.

Someone please remind me why NATO is still relevant? The EU has a terminal case of Sharia and the global stage is shifting to the Pacific Rim. What interests does NATO still serve?

Understand I’m a hawk, the primary cause for my shift from liberal to conservative in my 20s was foreign policy. I had a dose of Carter and then Reagan Thatcher and the Pope won the Cold War that we had been told was the Forever Stalemated New Normal by the “experts”.

Play the long game. If Europe takes a greater interest in its own defense, this will change perspectives among those countries and give them the kind of national pride that provokes a sense of self-preservation. We need strong, proud allies like Israel. Not white-guilt burdened swamps like France.

In the space of 37 years Europe began two world wars and killed 100,000,000 people. And, they devastated the entire continent twice. Then, in 1945 the USA took over and spent 7 decades bribing and bullying Europe to play nice.

Today, the US is withdrawing. And, make no mistake about it. We will see Europe reverting to regional wars for raw materials and prestige. (Notice they are already taking apart North Africa like in the colonial days.)

Maybe Trump is hoping that NATO can forestall some of the blood shed by gradually taking over the role of peace enforcer.

Has any nation that voted to install it been allowed to vote for removing it?

Btexit may be close to that, but they haven’t been allowed to exit yet. Hmm.

“Trump insisted he wants the spending goal to be 4%, but is for now focused “on bringing allies to 2% first.”

Perhaps I’m jaded, but I have doubts that a whirlwind verbal butt kicking for all these feckless, open borders, islam appeasing Euro-weenies will cause them to pry open their wallets once the Trump’s echo fades from the continent.

Wake me when the check clears…

It is a set-up. If the other nations don’t pony up, then the US can withdraw on one year’s notice of such intent. Without the US, there would be NO effective NATO.

So he declared victory and left certain leaders facing angry supporters upset they permitted Trump even a paper victory. It’s interesting showmanship, but little has changed.

Does it seem like Trump is leveraging our disadvantages against each other to cancel one out where he can?

Trump: When I go back to talking about how your tarrifs are unfair, I’ll include how you are also screwing us by not paying your dues to keep NATO afloat.

Europe: uhm… What can we do to take that off the table?

Trump’s NATO play had nothing to do with how much the individual nations contribute to the organization. It was all about punching Merkel, and to a lesser extent Macron, in the nose. It also pressures the member nations to pay their fair share, instead of relying upon the largess of the US. The US cancelled the Iran Nuclear Agreement, for just cause, and reinstated the Iran sanctions. It is expected that the allies of the US would support that. But, Germany and France, among others, chose to ignore that and concentrate on their own economic interests. The same happened with regard to trade, especially tariffs. So, Trump is making the point that the US does not need NATO, but NATO needs the US. And, that Merkel’s government in Germany is going to face a choice of whether it has friendly relations with the US.

Trump’s goal, internationally, has always been to stop other nations from taking advantage of the US. This includes the areas of trade, economics, mutual defense and international diplomacy.

Which is why the American Democratic”Socialist” Party is being turned inside out. Those who are 100% behind the socialist policies which support a strong E.U. and moving the party in that direction are envisioning that the established Republic of America positioning itself (hand back over) by uniting with, not the England that we left 242 yrs. ago, but the current Socialist England which has been achieved by it’s E.U. alliance. To hell with the commoner and self-rule. The E.U. is a one-size fits all miss-fit originally born by the need to have a common market across borders, which was the power play to open the door for domination to wealth and power. Leaving NATO may be the best leverage to let them deal with the problems of their own making.

It was certainly not expected these nations would support renewed Iran sanctions. They, and the Obama administration diplomats, were very loud and clear about that.

You have to understand what the EU was supposed to be; the peaceful conquest of Europe by the German elite. For all intents and purposes, the German elite controls the EU. It was accomplished by the creep of socialism across the continent. Though people tend to think of the NAZI party, which the German people welcomed in the 1930s, as not being a socialist organization, the name, National Socialist German Workers Party, belies that. Germany has been socialist for 100 years and now the rest of Europe has followed suit and Germany largely controls the continent. The election of HRC was supposed to cement the socialist conquest of the USA. That failed to happen and the socialists have pulled out all the stops to get it back on their track.

He’s put an awful lot of effort into trying to get the other members to meet their obligations to NATO — that’s a pro-NATO move.