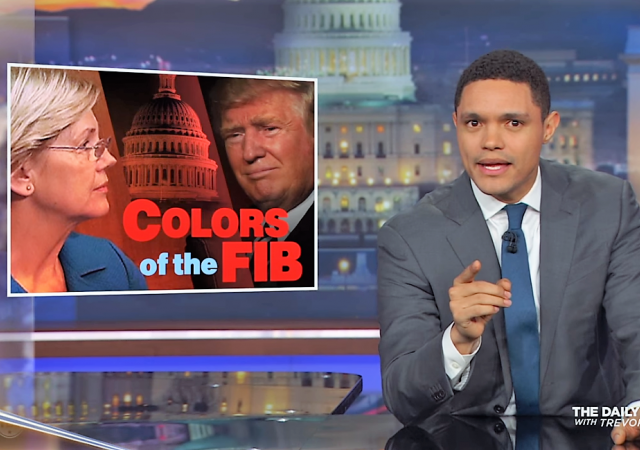 No, the “Daily Show” host didn’t Tweet disgusting pedophilia “jokes” a decade or so ago. The connection is there all the same on two fronts.

Noah is catching heat for jokes he told during a 2013 stand-up routine that insulted aboriginal women.

“All women of every race can be beautiful,” the host of the Daily Show said. “And I know some of you are sitting there now going, ‘Oh Trevor … I’ve never seen a beautiful Aborigine’ But you know what you say? You say, ‘Yet.’ Because you haven’t seen all of them, right?”

“Plus it’s not always about looks, maybe Aborigine women do special things, maybe they’ll just like, jump on top of you,” he said, before making a suggestive gesture.

The material just resurfaced, much like Gunn’s old jokes bubbled back to the surface courtesy of digging done by online provocatuer Mike Cernovich. Noah got slammed as a racist in short order.

In our overly sensitive times a single joke is enough to spark an apology tour or, in some cases, crash a career. Even the great Lenny Bruce might have trouble navigating the modern college campus.

For Noah, that meant he faced a potential boycott as some suggested he shouldn’t be allowed to perform in Australia. The comedian responded by promising he’d never tell similar jokes again. He also vowed not to promote the stand-up special featuring that material.

Noah didn’t lose his “Daily Show” gig like “Guardians of the Galaxy” director Gunn did, but you have to look deeper to find the second Gunn-like angle. Earlier this year Comedy Central released video of Noah addressing headlines about a white South African woman going to jail for three years for repeatedly using a racial slur.
http://www.cc.com/video-clips/dqnqon/the-daily-show-with-trevor-noah-between-the-scenes—a-south-african-woman-goes-to-prison-for-being-super-racist

“She used South Africa’s version of the n-word,” Noah said in describing the incident.

Few sane souls would defend her words, but Americans who cherish their free speech rights couldn’t be happy about the harsh punishment.

So how did Noah, a comedian whose career demands free speech protection, react? He smiled along with his audience as he shared her stiff sentence. You see, white people were never punished after his country’s apartheid era ended, he explained. The only admonishment hoisted upon them? They couldn’t use the K-word for fear of government reprisal.

“Don’t be racist,” he said smugly.

That hypocrisy defines the Left’s social justice agenda when it comes to free speech. Noah himself didn’t rush to Roseanne Barr’s defense after a single, ugly Tweet caused her career to collapse. His late night peers have been mostly silent on the free speech attacks being seen on college campuses nationwide. Few, if any, comedians rushed to that rodeo clown’s side when his President Obama sketch caused him to lose his gig … and more.

The religiously liberal host of HBO’s “Real Time with Bill Maher” was one of the few comedians to fight back against the PC police when he defended Amy Schumer for sexism charges tied to her recent comedy dud “I Feel Pretty. He stood up to the fickle online mob, but some of his peers prefer to stay silent in these cases.

This isn’t the first time Noah felt the heat from our PC times. Right before he took the “Daily Show” baton from Jon Stewart more ugly tweets surfaced from Noah’s past.

To which he responded:

To reduce my views to a handful of jokes that didn’t land is not a true reflection of my character, nor my evolution as a comedian.

​Christian Toto is editor of HollywoodInToto.com and host of The Hollywood in Toto Podcast

Identity Politics is corrupt, and corruption feeds on itself. Welcome to the world you helped create, Noah. Where the rules are always changing. Where what you thought was okay today will be “problematic” tommorow. Say goodbye to your career.

Blue on Blue IV, The Purge

Opening in theaters this week
Sponsored by Fen’s Popcorn Extravaganza

Trevor’s middle name is absurd, it rhymes with a……..

These folks are utterly ignorant of history and of the French Revolution specifically. If Robespierre wasn’t safe, none of them are safe.

The truth didn’t”land” with this guy, even now.

His ‘character?’ (What character? He’s a propagandist.) His ‘evolution as a comedian?’ (Well, he’s got us there: he helped make a joke out of CNN.)

Take it to the SJW Supreme Court.

Lenny Bruce would have said, “F*** ’em if they can’t take a joke,” if he had any response other than to just continue with his brand of humor. He didn’t give two sh**s about offending people with his humor.

“To reduce my views to a handful of jokes that didn’t land is not a true reflection of my character, nor my evolution as a comedian.” Yes it does Trevor, just look around you and what happened to others. Admit it, you fit the current definition of a racist. The fact it happened in the past is no excuse.