“I’m looking at every single possible motive for this.” 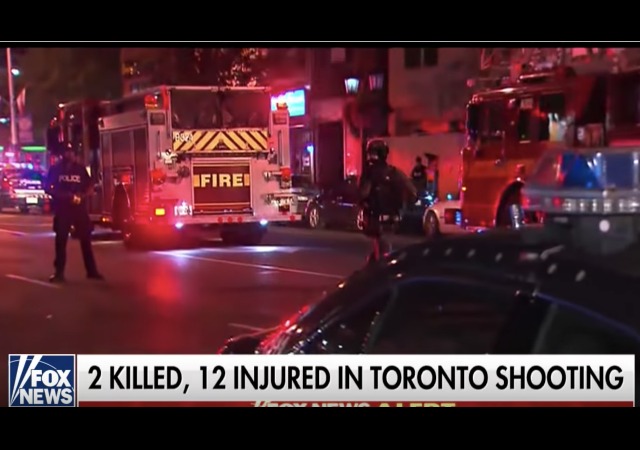 A gunman killed two people and wounded at least 12 others in an attack in a Toronto Greek neighborhood on Sunday night. The suspect, 29, died after he exchanged gunfire with police, but we do not know as of now if police killed him or if he committed suicide.

Police Chief Mark Saunders said on Monday morning that the attack “was not random and he did not rule out terrorism as a motive.”

Toronto Police Chief Mark Saunders said cops were investigating “every possible motive, including terrorism.” Saunders said a young woman was among the dead, and a 9-year-old girl was critically injured in the shooting.

“I’m looking at every single possible motive for this,” the Canadian top cop told reporters. “When you have this many people struck by gunfire, it’s a grave concern.”

Saunders said it was not clear if the gunman was killed by police or if he killed himself. The SIU said the suspected gunman, a 29-year-old man, was located by police on Bowden Street and “an exchange of gunfire took place.” The man fled the area and was located, deceased, on Danforth Avenue, according to the SIU.

CTV’s public safety analyst and former commissioner of the OPP [Ontario Provincial Police] Chris Lewis explained how the police will handle the situation:

“Was he inspired by some terrorist group? Was this a specific vendetta to kill a specific person and then he shot everybody else in his path?” he said. “That’s the big job of Toronto police. They can’t tell us a lot yet because they don’t know a lot yet.”

People will feel an urge to “put it in a bucket” by ascribing a motive such as terrorism or gang activity to the shooting, Lewis said, although the truth can often be more complicated. He pointed to last year’s shooting at a Las Vegas hotel which left 58 people dead and more than 800 others injured.

Witness video shows a man dressed in all black clothing firing three shots from the sidewalk into at least one shop or restaurant in Toronto https://t.co/Rg9Ha4zR0M pic.twitter.com/eSER94DbZD

Witnesses described a man dressed in black clothes with a black hat “walking past restaurants and cafes and patios on both sides of” Danforth Avenue “and firing into them.”

From The Globe and Mail:

Andrew Mantzios was having a coffee with friends by the fountain at Danforth and Logan Avenues – a popular gathering spot for residents – when he heard gunshots ring out, around 10 p.m.

He turned and saw a man, dressed in all black, walking toward them with a handgun. “He had this horrible expression on his face.”

The man, he said, was pointing his gun and firing at a crowd of people standing on the corner of the intersection, waiting to cross the street. Somebody yelled to get down.

“And then a lady tried to run and she fell down,” Mr. Mantzios recalled. “He turned around and shot her point blank, two or three times.”

As he and others in the square scrambled to the ground, Mr. Mantzios watched as the man criss-crossed along Danforth, shooting into businesses. He said a friend of his saw the man change the clip of his weapon.

Why should we count the perpetrator as one of the dead in a “mass shooting” incident? Whether he committed suicide, or died from police return fire (i.e. suicide by cop), the worthless POS should have as ignominious end as possible. His name should never be mentioned in polite society, or anywhere else. And that goes for “school shooters” as well.

The Globe and the Mail: “He said a friend of his saw the man change the clip of his weapon.”

There really is no excuse for the media to keep making this ignorant mistake. Soon they will begin lecturing us about guns and what we need.

NYTs: “Judge Kavanaugh opened the confirmation hearings with an anecdote about how his time in Marbury-Madison formed his opinion that “Men’s Rhea” established the white supremacy clause of the Higher Supreme Court. What follows is our expert analysis of his most recent dockets..”

(crumples up paper, lights it on fire)

How I feel when the media reports on firearms…

NYTs Editor: “A recent post alluded to the “Murry-Gellman Amnesia Effect”. The correct term is Gell-Mann. And Murry, while not usually included, is correctly spelled Murray. We apologize for the error”

That seems reasonable: They believe they know the identity of the shooter, but do not want to release it until they have confirmed it, to avoid a publicity error that could harm innocents and to determine if there may be terrorist connections to track down without tipping off the suspects.

“This massacre brought to you by the delusion of gun control.”

I’ve already heard that the mayor blamed the lax availability of guns in Canada. No, I do not have any remote clue what he is speaking about. Canadian gun laws? Lax? There’s a near-complete ban on handguns, but criminals get around it, being criminals. I see from the Fox link that this was a handgun.

Just as a precaution, every police force in the US should coat their ammo in pig fat. This way a lot of the questionable “Terrorists” will shoot themselves rather than be shot by the police.

The body should be wrapped in pig intestine.

I used to frequently visit Toronto, it was a very safe city then, today, post middle eastern immigrants, it is no longer safe. Like Europe, Canada is committing cultural suicide.

Rather than bringing dull witted middle eastern immigrants in, Canada should be welcoming people from other western countries, and also should offer tax incentives to Canadian citizens to have more children.

There is no evidence or reason to suppose it would have such an effect. The story about Pershing is made up.

I would imagine the same as the Sepoy Rebellion of 1857…. whether pig grease or cow grease… it only mattered before the fight and never an issue on using it against the non-believer in the fight.

The Sepoy Rebellion was pretty much the opposite. They objected to using the offending bullets, not to being shot with them. The myth being dealt with here is that Moslems believe being buried with pig products will keep them out of Heaven, so threatening to do so will make them modify their behavior. There’s just no evidence that this is so.

“Mass shooting” used to mean something… as in the old FBI definition of five killed. Take a 410 gauge shell with #9 and pelt a group of people at 30 yards and that is a mass shooting by new definition without any chance for major injury.

The departed gunman’s name was Faisal Hussain.
No surprise for many of us.

They may try to blame his actions on his state of mental health, said to be poor. But this not only shouldn’t cause terrorism to be discounted, it should spark an investigation into who may have turned him into a jihadi.

From the book The Sheriff of Ramadi in which a Navy SEAL and senior chief recounts how Al-Qaeda in Iraq (AQI) recruits suicide bombers:

“Those SOBs go out and recruit kids to do this. Our interrogators were able to get the whole story (from captured AQI recruits). One of them had been sexually abused as a young boy and was told the only way he could reclaim his family honor was to die for Allah in this manner. The senior AQI leaders – the foreigners – won’t do this themselves. They get others to do it. They prey upon kids, young boys and girls who are insecure or have some psychological disorder. Some of them have severe learning disabilities…”

Why look further than the plain and obvious??? Why entertain fantasies??