The Oval Office is taking up way too much real estate in far too many heads. 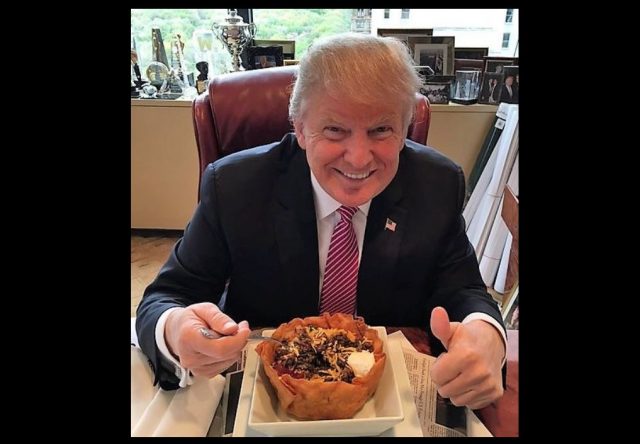 I keep thinking there will come a point when the public realizes turning politics into a religion is not just unfruitful, but potentially personally devastating. Politics and politicians are fickle and will always fail you given the opportunity. But, we’re not there yet.

Bridgid Delaney quit going to the gym when Trump won the 2016 election. The owner of the gym Delaney once frequented and Delaney entered into a pre-election bet, if Trump one, Delaney would have to pull 70kg on a “sled” machine. If Hillary won, the gym owner would have to pull double his personal best.

The sled was the beginning of the end of Delaney’s gym career, at least for some time. 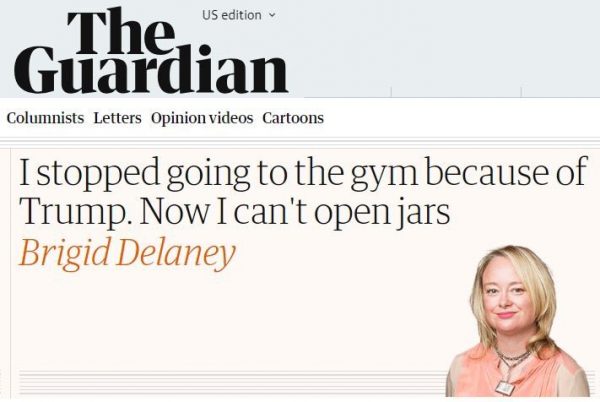 Writing in The Guardian, Delaney explained:

I didn’t want Trump to win – he’d grabbed women by the pussy and mocked a reporter’s disability. He’d promised to build a wall and called Mexicans “rapists”. The thought of his presidency was frightening but so was pulling the sled. What if I herniated a disc?

After Trump claimed victory, I went up to the gym in a foul mood. “Just fucking load up the fucking sled, all right, and let’s get it over with,” I said without much grace as I strapped a belt around my waist.

I pulled the sled like a human oxen while being filmed and the gym staff cheered. I did it. But the Trump victory soured my successful show of strength.

Yeah, I could pull a pretend sled. But how was that going to help me when the world had been destroyed by nuclear weapons or climate change?

Hungry and sore, I repaired to a restaurant down the road that I had never visited and where I had never seen anyone come or go from. The silent restaurant – no background music, no other diners – seemed like the perfect place to welcome the end of the global liberal order.

What new political order had been born tonight?

An elderly waiter appeared and handed me a menu. Most things on it were not available. The one dish that was was unspeakably awful and the colour and texture of cement.

I never went back. But I also didn’t return to the gym. I associated it now with Donald Trump, the bad meal and pulling the sled.

Delaney claims she tried adopting Trump’s personal health philosophy (if he has one): walk a little, run between buildings, eat at McDonald’s, drink Diet Coke…

In the spirit of the Donald, I drank more bottles of Diet Coke and ate more McDonald’s. I dropped the gym – embracing Trump’s belief that we are given a certain amount of energy and if we use it then we are depleting a finite resource.

According to the book Trump Revealed: “Trump believed the human body was like a battery, with a finite amount of energy, which exercise only depleted. So he didn’t work out. When he learned that John O’Donnell, one of his top casino executives, was training for an Ironman triathlon, he admonished him, ‘You are going to die young because of this.’”

I didn’t want to die young, so I didn’t go to the gym.

Trump explained his exercise routine like this to Reuters: “I get exercise. I mean I walk, I this, I that. I run over to a building next door. I get more exercise than people think.”

I walked. I this. I that. Months passed. Then a year. Trump was going to be in power for another 1,000 years. Or at least that’s what it felt like. Could I really avoid the gym for the entirety of his presidency?

I missed being strong enough to open jars and carry groceries.

So Delaney returned to the gym. “I returned again this week – to the boredom and pain of the gym – trying to build up back to the strength I had before Trump became president,” she wrote.

The Oval Office is taking up way too much real estate in far too many heads.

Which leads me to my perpetual soapbox: true change is not born in D.C. or anywhere else in the political world. Change happens with you. With me. Change is made possible in and through relationships, in our homes, our communities, and families.

And if you’re lamenting your inability to open a jar because you let an election wreck your life, perhaps it’s time to get a life filled with substantive meaning and purpose.

“… turning politics into a religion is not just unfruitful, but potentially personally devastating…”

Millions of Ukrainians, Russians, Chinese, Cambodians, Vietnamese would agree. If they weren’t dead by democide.

But turn it into a Thugee-lite Religion they have.

Do Not Look Away: Politicians, Pundits and Predators Continue Showcasing Democrat Ideology…

There are those who refuse to accept how deviant and perverse the underlying progressive ideology of Democrats really is; however, that tribe is shrinking. More and more Americans are waking up to understand and accept the commonality. The latest example from Austin, Texas, is not an exception; this is who Democrats are. Do not look away.

This bitter female claims that she lost the ability to carry her groceries in a year, from failing to to to the gym. Wow, she must have some underlying, degenerative disease, or else, she’s lying.I wonder if the whole story is made-up, from start to finish?

Oh, and Delaney’s a loon.

The funny part is the guardian found this dreck fit to publish.

Reading the guardian is like pulling a sled filled with two imperial tonnes of rancid tallow renderings.

It demonstrates, through the protaganist Delaney, how utterly pathetic liberals are with their constant blame-shifting and their total dedication to avoiding individual responsibility.

And she bought into the media narrative, hook, line, and sinker.

Stop giving idiots like this a platform to dispense their nonsense. Back in the good old days, people’s thoughts used to stay in their heads or at least only be spewed upon the few people they came in contact with. Now anybody around the world can project their nonsense into my eyes and ears. It’s literally pollution.

These people should be given every platform possible. Their insanity needs to be broadcast to anybody and everybody that THIS is the kind of person that thinks they know better than you how to run your life.

The poor woman has a mental health issue. Without power, the leftist is virtually without oxygen.

This was a joke, right? Well, whether it was intended as a joke, or not, it gave me a good laugh. Thanks.

hillary can open those jars for you brigid.

Non-GMO, Vegan groceries, and bottled natural spring water, are very heavy. But they ease the weight of guilt of being human.

Look, I understand how these people felt after the election. I understand because that’s exactly how I felt four years earlier. (In 2008 at least the result was not unexpected, though I had hoped people would come to their senses. But in 2012 I really thought 0bama would lose, and I was devastated when he didn’t.) I was so disgusted I decided to give up and go on food stamps (for which I was eligible at the time, but not taking); if the people wanted President Food Stamp, why should I be different? But I didn’t end up doing it; I got on with my life.

I can understand it, Milhouse. I am a human being. Or did you doubt that?

Virtue signalling, self-victimisation, pathological narcissism, infantilisation, the predictable collective currency of Leftist fatuous self-validation. What a frightful whining delinquent Delaney proves herself to be. But one expects nothing less from the Gruniard platform. I hope that she eventually matures to be haunted by her pecksniffian kraptitudinous verbosity as I hope someone has the wisdom to inscribe it on her gravestone as a health warning for future generations.

Virtue signalling, self-victimisation, pathological narcissism, infantilisation, the predictable collective currency of Leftist fatuous self-validation. What a frightful whining delinquent Delaney proves herself to be. But one expects nothing less from the Gruniard platform. I hope that she eventually matures to be haunted by her pecksniffian kraptitudinous verbosity as I hope someone has the wisdom to inscribe it on her gravestone as a health warning for future generations.

In this age of bots.

I love you, perfessor, but you’ll never be Lex,

“For many of us, the Lexicans, he became more than just a blogger but a friend. Carroll “Lex” LeFon not only enjoyed writing, but he enjoyed the interaction of the “commentariat”, many of whom he called “the best friends I never met”.

Soon after his accident, his website, Neptunus Lex, went down. If it weren’t for one Lexican, who copied and pasted most (about 70%) of his posts for later reading, “the lightness of Lex”, all 9 years’ worth of his work, would have been gone forever. and have also added (as of today, 04-18-18) an additional 270 posts. I should be done in a couple of months…”

It was no accident. And, no, no conspiracies. He died doing what he loved. Training aviators. flying as an aggressor to sharpen their blades. His heat just gave out.

I miss lex and I know I’m not the only one.

You know, that pretty much works for me. Except about the part where I’m working for the man.

Does it bother anyone else that the only completely factual statement in her first sentence is “he promised to build a wall” – everything else is a distortion. Or is it such that it isn’t worth correcting anymore?

Not going to the gym anymore? Faber College Dean Vernon Wormer’s advice would be appropriate here: