“We are coming to chop your heads off your necks.” 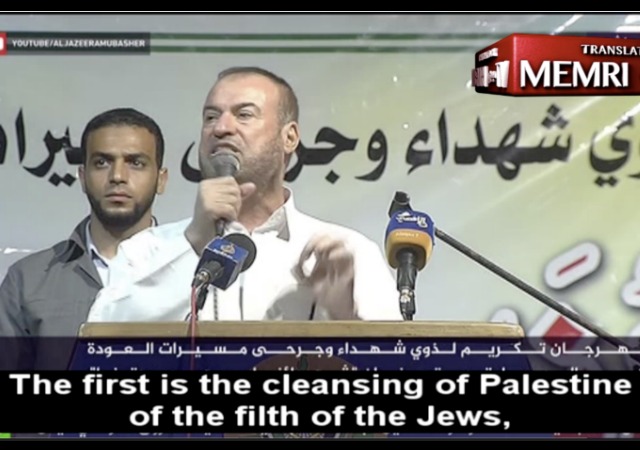 Senior Hamas official Fathi Hammad announced at a rally on July 12 that the terrorist group will “cleanse Palestine of the filth of the Jews” by 2022.

“The fact that we participate in the peaceful March of Return does not mean that we have abandoned the military path of jihad,” he said. “Our finger is on the trigger and our plants are operating and working day and night. Every day we invent something new, using all our strength, our nerves, our bones and our flesh. Every day we manufacture more military power.”

Hammad also demanded a second Arab Spring to “focus on the Al-Aqsa Mosque, Allah willing. We are your embers and your fuel, Allah willing.” He thinks Israel is “terrified” of war with terror groups from Palestine.

A day after the speech, Palestinians hurled a grenade at an IDF officer and wounded him. The violent clashes led to the death of a 15-year-old Palestinian.

On that same day, “Hamas fired some 200 rockets and mortar shells at southern Israel, while Israel bombarded Hamas targets in the Strip, in one of the largest exchanges of fire since the 2014 Gaza war.”

Senior Hamas Official Fathi Hammad: We Will Cleanse Palestine of the Filth of the Jews, Heal the Nation of the Jewish Cancer; Netanyahu, Lieberman, We Are Coming to Chop Off Your Heads! pic.twitter.com/PCs9fOgbYF

This isn’t the first time Hammad has made the news. Back in September 2016, Hammad claimed he was proud that the US branded him a “global terrorist” and spoke to The Washington Post:

On Saturday, Hammad told The Washington Post: “The decision only makes me more confident about my path. The threat of killing or arrest? It doesn’t freak me out, not at all. I am looking forward to it.”

Hammad said, “I feel proud that I managed to anger America.”

Then he added, “I don’t know why they picked me.”

A few months later, Hammad told Al-Aqsa TV that “Hamas has offered to share its rocket arsenal with any Arab army willing to use them against Israel.”

I predict his lifespan will soon be interrupted.

He does know the Mossad is good at reducing troublesome pests into slag heaps, doesn’t he?

They tried to cleanse the Levant of the filthy Jews, then Jordan of the filthy Jordanians. They and the people they represent have been on a progressive slope ever since. Next step: hang burning tires on their Fatah competitors, or open abortion fields backed by leftists to force division of Israel.

Fathi’s gonna get drone-zapped. The Israelis won’t fool around for long with him.

Israel has its liberal idiots and its own version of GOPe hacks who still believes doing good deeds for those sworn to kill them helps them in the long run.

There are Jewish neville chamberlains everywhere, you know. Just look at the suicidal JINOs in America.

I’d like to know what Hammy thinks he’s got that the Persians, Babylonians, Greeks, Romans, Egyptians, Germans, etc. didn’t have. Because, otherwise, he’s just another blowhard who likely will feel the wrath of Israel.

And With better teeth than Bucky Beto O’Rourke. (Poor guy is so oppressed.)

It never ceases to astonish me how there could be so many people across the world who have been successfully brainwashed into thinking that their goal of mass murdering people of a different religion is perfectly rational and completely justified.

It isn’t exactly a new concept.

yeah – it’s only surprising to those who have a hard time with the concept that Evil is real, and it exists all across the earth, in every group of men. When Evil calls it’s own, they can’t help but answer the call.

Its here in the US too. Remember obama’s ‘czars’ and their warped views on political genocide in furthuring their political goals?

Obama and his henchmen were – and remain – sick, dangerous
people.

Obama and his henchmen were – and remain – sick, dangerous
people, competent for one thing only: destruction.

There’s pretty much just one religion these days that still has those thoughts. I’ll leave it up to you to figure out which one.

The answer is that he’s Muslim.

Is it just me or is the guy behind him thinking “I probably shouldn’t be standing this close.”

Just look at his face: The speaker does appear to be suffering from some kind of intestinal discomfort.

Yeah, sure – – delusional Leftist apologists for Islam and contemptible anti-Semitic propagandists contend with a straight face that these goose-stepping, supremacist, embittered, totalitarian, belligerent jackboots are interested in peaceful co-existence.

So, really, who cares about this? This the same rhetoric that wa have been hearing for the last 70 years. It is nothing new. The Arabs hate the Israelis and want to kill them all or drive them into the sea. and the Israelis know this. Saw the movie, got the t-shirt. Is there anything new from the Palestinians, like they want to convert to Judaism?

I expect the Democrats will soon be saying this to us, the deplorables.

Remember, next time the leftist, Jew-hating press cries about Israel bombing “innocent civilians”, remember that those “civilians” elected Hamas to power and still support them. Thousands tried to storm the fence to enter Israel and slaughter Israelis.

The “civilians” are every bit the vile, savage, genocidal Islamonazi scum as the formal Hamas organization. And if Israel decides it has to destroy Gaza to save Israel, I have no sympathy for these savages.

I so want to kill this man. Just erase him. But, and here’s the point where Jews should be glad that there is such a thing as Christianity. I can’t. I realize that we Christians haven’t always lived up to our ideals. But as much as I want to, I can’t. I hope anyone monitoring this site gets the message. This man is safe from me.