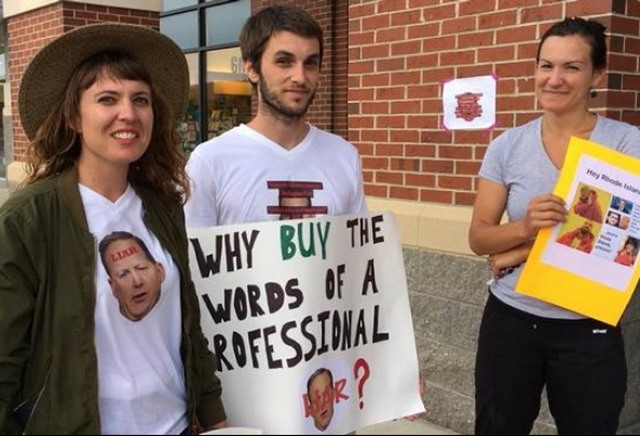 Former White House spokesman Sean Spicer did a book signing in Middleton, Rhode Island this weekend. Plenty of fans showed up to buy his book and have it signed but so did a gaggle of obnoxious leftists. Nothing will be allowed to be enjoyed, if progressives have anything to do with it.

One man even entered the store and accused Spicer of using the “n” word.

Supporters and opponents of President Donald Trump verbally clashed inside and outside Barnes & Noble on Friday evening during a book signing by Rhode Island native Sean Spicer, a former White House press secretary.

Outside, a small group of opponents held signs, one of which simply said “LIAR” in black letters. As Gino Martinelli of Middletown walked by, he said to the group, “Hey, Trump won.” Members of the group and Martinelli went back and forth for a few minutes before Martinelli, wearing a “Re-Elect Trump 2020” hat, retreated to his car. Upon leaving, he said, “And he’ll win again in 2020.”

Inside, things really got contentious as book-carrying people snaked between rows of shelves waiting for their chance to approach Spicer. A man, identified as Alex Lombard, called out Spicer’s name from across the room.

“Sean, I was a day student at [Portsmouth] Abbey, too, with you,” said Lombard, who is African-American. “Don’t you remember? You don’t remember that you tried to fight me? But you called me a (racial epithet) first.”

One thing you don’t see in the video is Spicer’s response to the racist allegations. WDBO News reported:

A Newport Daily News video of the encounter doesn’t show how Spicer, who was seated at a table signing books, reacted to being accused of using the racial slur. But his publicist said he was shocked by the allegation.

Spicer “can’t recall any incident like this happening” and was “not sure if this was just a stunt this man was pulling,” Regnery Publishing publicist Lauren McCue said.

She said Spicer has been in the news a lot the last couple of years and it was “a very odd time” for an accusation like this to be made.

This is the second time that Spicer’s book tour has attracted anti-Trump protesters.

Sean Spicer had an awkward moment in New York City Wednesday night during a talk at Barnes and Noble promoting his new book, “The Briefing,” which chronicled his time as White House press secretary.

At one moment during the event, an unnamed protester shot up from his chair and heckled Spicer, which elicited loud boos from the audience.

. . . . “Hey Sean, you’re a real piece of garbage and I hope you look around and see all these empty seats,” said the man. “And I hope you realize in even in New York City, people will not come and pay money to hear you speak.”

“It’s a garbage book and you’re a garbage person,” the man added as he was led away. “You lied as press secretary, now you’re lying in your books. I’ve read the reviews! The Wall Street Journal called you a liar.“

Spicer, however, also had his defenders in the crowd. The Outburst sparked boos, with one person angrily telling the protester to “get the f— out.”

This is not unlike the harassment of Sarah Huckabee Sanders and others we’ve witnessed over the last month.

It’s unclear how the left thinks this is going to win them any votes.

Spicer had reportedly threatened the AP with legal action.

Former White House press secretary Sean Spicer is threatening to take legal action against The Associated Press over a report from the wire service about an incident on his book tour.

The AP report, published Saturday, documented an incident at Spicer’s book signing in Middletown, R.I., on Friday during which a black man claiming to be a former classmate of Spicer’s at Portsmouth Abbey School accused Spicer of using a racial slur.

Stunts like this, and the others like it, are what make people go out and VOTE for the man, simply because the vileness of the left is INTOLERABLE.

It’s unclear how the left thinks this is going to win them any votes.

They don’t care about winning votes. They have a hate monster living inside them, that needs to be fed.

The claim of a racial slur is really a disgusting low – just imagine what any of us could do if that happened to us! Someone you don’t know, who to the best of your knowledge you have never even seen in your life, walks up and said “You insulted me 25 years ago and I never said anything to anyone about it until now!!!”

How could anyone defend themselves against a charge like that? You can’t, which is why they make it.

The same tactic should be used against them. I am sick of it, and the only way to stop this from going on is to turn it back on them.

Talk to Judge Roy Moore about it

Any publicity is good publicity?

Why doesn’t Spicer get his rear end of Deep Blue places for book signings. He and others don’t seem to get that on the West coast and NorthEast these people are confortable because they know they politically own the surroundings. I don’t like the idea of No-Go zones for Conservatives but that is what the Left has decided to create.

Steven Crowder actually comes back at these jerks and confronts them about their behavior. Which ios probably what will have to happen.

Look at the photos! Is this your future business leader or rocket scientist? Living in a pretty expensive state, probably in big-bucks colleges, shouldn’t these college kids have summer jobs?

The sad and funny part is these children, and the adults who encourage them, couldn’t get through even a single days New York Times and understand the articles. Can we ever hope they’ll ever read and try to understand the constitution? Maybe they just plan to wait around until their cars, fancily printed t-shirts and suburban homes become ‘free’? Pathetic. I’m yelling back!

Is there another kind?

These protests are (obviously) not about influencing people, they are a selfish exercise in vanity meant to assuage guilt and prop up self-esteem.

I have a theory that the more often these cretins participate in these kind of Heckler’s Veto disruptions, the more likely they are worthless jerks in their real life.

Sidebet that Metrosexual Beard Guy in the photo still lives with his parents and skims Mother’s Little Helper from Mom’s medicine cabinet to dose the girls he invites over to discuss how he can better champion feminism?

“So maybe I did drug the babysitter for sex, but I shouted down that fascist book signing, so I can’t be a total douchebag, right?’ he says to his mirror every morning.

You’re nobody, until you accomplish something worthwhile.

If you don’t want to do the work or take the responsibility to accomplish something worthwhile, you take a job protesting for George Soros.

It is a good job the two protesters wore black sunglasses. Now we won’t be able to recognize them.