Move Over Iraq and Iran, Texas is Taking Over as the World’s No. 3 Oil Producer

Move Over Iraq and Iran, Texas is Taking Over as the World’s No. 3 Oil Producer

Because of labor and transportation shortages, the boom may level off soon. 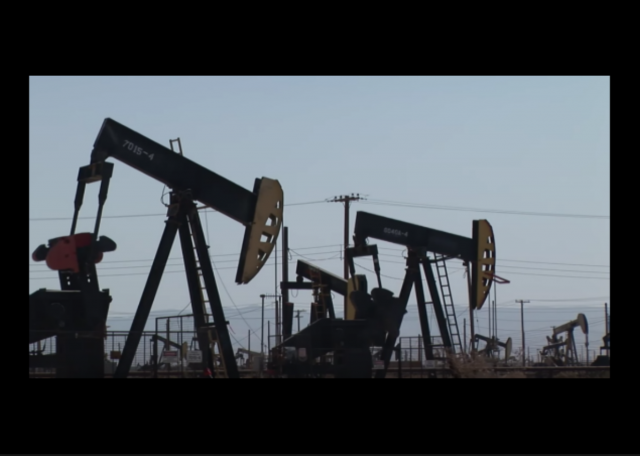 The Lone Star State is poised to pass up Iraq and Iran becoming the world’s third-largest producer of oil next year.

CNN Money reports the shale boom in the Permian Basin, which covers a large swath of West Texas and Southeast New Mexico, is to thank. 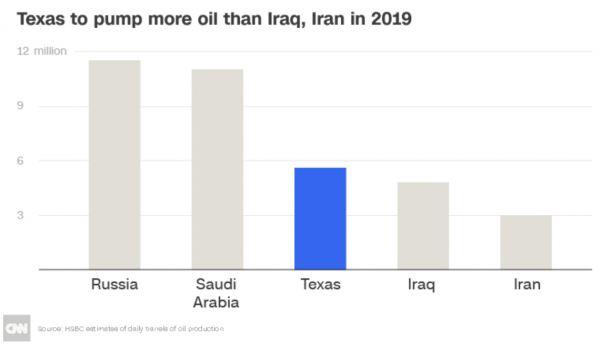 Plunging drilling costs have sparked an explosion of production out of the Permian Basin of West Texas. In fact, Texas is pumping so much oil that it will surpass OPEC members Iran and Iraq next year, HSBC predicted in a recent report.

If it were a country, Texas would be the world’s No. 3 oil producer, behind only Russia and Saudi Arabia, the investment bank said.

“It’s remarkable. The Permian is nothing less than a blessing for the global economy,” said Bob McNally, president of Rapidan Energy Group, a consulting firm.

The hyper growth out of Texas is needed because oil prices have risen sharply and major players like Saudi Arabia are quickly maxing out their production.
Much of the excitement in Texas centers around the Permian Basin. Some oil execs believe the amount of oil in the Permian rivals Saudi Arabia’s Ghawar Field, the world’s largest conventional oilfield.

Rapid technological advances have dramatically brought down the cost of pumping oil everywhere, especially out of the Permian. Wells there can be profitable below $40 a barrel.

“The industry cracked the code on fracking,” said McNally.

The rise of Texas, which is also home to the Eagle Ford oilfield in the state’s south, shows how the shale oil revolution has reshaped the global energy landscape. The United States is pumping more oil than ever before, making it less reliant on the turbulent Middle East for imports.

“It’s not going to make the world peaceful, but it will make it less volatile,” said McNally, a former White House official.

In West Texas, the shale boom has revitalized towns and cities, but has brought with it worker shortages across several industries. With oil and its service industries paying more, there’s little incentive to work elsewhere.

“…Drillers, service providers and trucking companies have been poaching in all corners, recruiting everyone from police officers to grocery clerks,” reports the Dallas Morning News.

The oil industry has such a ferocious appetite for workers that it’ll hire just about anyone with the most basic skills. “It is crazy,” said Jazmin Jimenez, 24, who zipped through a two-week training program at New Mexico Junior College in Hobbs, about 100 miles north of Midland, and was hired by Chevron Corp. as a well-pump checker. “Honestly I never thought I’d see myself at an oilfield company. But now that I’m here — I think this is it.”

That’s understandable, considering the $28-a-hour she makes is double what she was earning until December as a guard at the Lea County Correctional Facility in Hobbs. When the boom goes bust, as history suggests they all do, shale-extraction businesses won’t be able to out-pay most employers anymore. Jimenez said she’ll take the money as long as it lasts.

And this one could go on for a while. Companies are more cost-conscious than ever, and the evolution of oilfield technology continues to make finding and producing oil quicker and cheaper in the pancaked layers of rock in the Permian. It now accounts for about 30 percent of all U.S. output.

…There’s no question the economic upside is big in the basin, which covers more than 75,000 square miles in west Texas and southeastern New Mexico. Midland saw year-over-year increases of at least 34 percent in sales-tax collections in each of the last four months. Morales said coffers are full enough that he may ask for raises for city workers — so they don’t bolt for the oil fields.

The labor shortage is inflamed by the real-estate market: The supply of homes for sale is the lowest on record, according to the Texas A&M Real Estate Center. The $325,440 average price in Midland is the highest since June 2014, the last time the world saw oil above $100 a barrel. Apartment rents in Midland and Odessa are up by more than a third from a year ago, with the average 863-square-foot unit commanding $1,272 a month.

That’s one reason the Ector County Independent School District has more than 100 teaching positions open, said spokesman Mike Adkins. People who move for jobs are stunned by the cost of living. Armin Rashvand’s apartment is smaller and costs more than the one he rented in Cleveland before moving last August to run the energy-technology program at Odessa College.

“That really surprised me,” he said, because Texas’s reputation is that it’s affordable. “In Texas, yes — except here.”

Another surprise: Some of his students, with two-year associate degrees, can make more than he does, with his master’s in science, electrical and electronic engineering. At Midland College’s oil and gas program, which trains for positions like petroleum-energy technician, enrollment is down about 20 percent from last year. But schools that teach how to pass the test for a CDL — commercial drivers license — are packed.

“A CDL is a golden ticket around here,” said Steve Sauceda, who runs the workforce training program at New Mexico Junior College. “You are employable just about anywhere.”

And you can make a whole lot more money than waiting tables at Gerardo’s Casita. Jeremiah Fleming, 30, is on track to pull down $140,000 driving flatbed trucks for Aveda Transportation & Energy Services Inc., hauling rigs.

Because of labor and transportation shortages, the boom may level off soon. CNN Money ctd:

HSBC called the Permian a “victim of its own success” and predicted that logistical constraints will cause production growth will slow in the future.

The pipeline shortage is already hurting local prices. The price of oil in West Texas recently traded at a $15 discount to Houston prices.

Some oil companies are also tapping the brakes. The number of oil rigs in the Permian dropped by five in June even as the overall US rig count was stable, according to the International Energy Agency.

“We’re not in a hurry to grow it fast against a system that’s completely constrained today,” ConocoPhillips (COP) CEO Ryan Lance reportedly said in May.

“The Lone Star State is poised to pass up Iraq and Iran becoming the world’s third-largest producer of oil next year.”

Must be the will of their Allah. lol,

Certainly not the will of the Dems…

I love how those opposed to the economic increase think that a labor shortage in Texas is a bad thing. If the oil production is maintained, then people from all over the country will come to the area to drive trucks, take LE jobs, work in convenience stores, etc. And, these people will all need places to live. This will require people in the building trades to build housing. This will likely draw in more people, which will simply sustain the cycle. The only real problem will be if the increased economy is short lived and/or there is no other sources of manufacturing to stabilize the economy of the region.

A local labor shortage is a good thing, when some much of the country’s workforce is unemployed, or under employed.

It’s still a boom and bust industry, which makes investors somewhat reluctant to invest in infrastructure, like apartments. My daughter and her husband were down on the Eagle Ford during the last boom. They literally couldn’t find anything better than a shack to live in within a 50 mile radius of their jobs.

Boom and bust cycles are a pain – but if any place is used to dealing with them, it’s Texas. The first great cycle began with Spindletop down on the coast in 1901 – then came the first West Texas boom – then it was Kilgore in the 30’s, and then the Permian Basin again in the late 70’s, and then the Eagleford, and now this.

It has it’s difficulties, but they’ve always been worked out before, and they’ll no doubt all be worked out again. These things always do.

Last I checked, the United States does not require government permits for citizens and legal residents to cross state boundaries in search of employment. You would think that the shortages will resolve themselves according to economic theories established by Adam Smith centuries ago.

Welfare does put a damper on that though.

Why move for a job when the govt pays you to stay unemployed?

This would be a great time to close and disband, not merge, the Department of Education. That would free up thousands of working age people who would certainly need jobs and would be available to work. Yeah they have to lift something slightly heavier than a pencil, but trucks these days have power everything, so if they can drive to work they should be able to handle that.