If you DO NOT want to be called fake news then DO NOT put out FAKE NEWS.

I’ve said it before and I will say it again: If you DO NOT want to be called fake news then DO NOT put out FAKE NEWS.

I cannot stand Attorney General Jeff Sessions and there is so much you can use against him that you don’t have to make up stuff! The MSM splattered across their pages that he joined in the “lock her up” chant that broke out during his summit.

He did not do this. 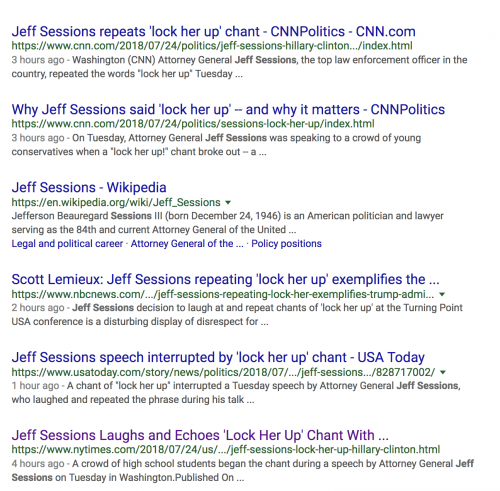 Dang. It sounds like he pumped his fist in the air and chanted those words repeatedly loud and proud!!

Sessions laughs and repeats it. He did not join their rallying cry. All he said after that is he heard that chant a lot on the campaign trail.

My face after watching it. Remember, I am no Sessions fan:

Even MSNBC justice correspondent refuted his network’s portrayal. From the Washington Free Beacon:

Sessions chuckled and said, “Lock her up,” almost to himself, before adding, “So, I heard that a long time on the last campaign.”

MSNBC played the clip and flashed the chyron, “Atty General Joins ‘Lock Her Up’ Chant At High School Event,” as anchor Hallie Jackson asked Williams to respond to what he saw.

You all know it’s hard to leave me speechless, but this just did because I honestly don’t get the outrage at all.

And @Politico joins scores of mainstream news outlets pushing this 100% FAKE narrative. The video speaks for itself. Go watch it. Sessions in no way “joined the chant” — this is why people simply do not respect the media. Truth be told, this is why they don’t deserve it. pic.twitter.com/lxnY5ykPYK

No, Jeff Sessions didn’t join in chants to #LockHerUp. It’s clear that he acknowledges them, laughs them off, and moves on.

Plus, if Trump and Sessions were really “evil fascists” they wouldn’t need to chant because Hillary would already have been thrown in jail. pic.twitter.com/LK9R0reVAf

I don’t see a problem either way. The chant was and is completely justified, and maybe the only justice we’ll see in her case.

Meanwhile, whether Sessions joined in the chant or not is irrelevant. He’s a terrible AG either way.

early onset Alzheimer – when in the senate, not noticible –
they repeat the same stuff all the time, see mad max …..

RE: “they repeat the same stuff all the time..”

Yes, and who cares what the Media Monkeys say anyways…..

Since he is the AG he can’t join in any such chants as that would make it appear that he isn’t interested in doing justice, which prosecutors are ethically required to do (though few actually do it) but he’s simply out for revenge.

If they do prosecute Clinton, and I hope they do take a second look at the case as it was open and shut (as anybody who ever had a security clearance) can tell you, it could have tainted the case had he joined in the chant.

In the Navy it was called “undue command influence.” Barack Obama idiotically engaged in that. At a press conference he publicly said he needed to see more convictions in sexual harassment/assault cases at armed forces courts martial. And a Navy judge promptly dismissed the charges against two Sailors accused of some combination of the two because, the judge said, Obama is the Commander in Chief. Any naval jury could reasonably conclude he was ordering them to convict the defendants.

Oh spare us the pointless hand wringing. There is lots of stuff the AG’s shouldn’t be doing, like deliberately undermining the 2nd Amendment through running illegal weapons to Mexico so they can be used to kill Americans with! You didn’t hear the fucking media wanking on about how inappropriate that makes the AG look did you.

In fact the media shouldn’t even be taking sides on this complete non-issue. The fact they feel ass fucked over the chant is enough to tell you where their true sympathies are!

I disagree. Prosecutors are absolutely entitled to declare their opinion that an accused person is guilty and ought to be locked up. Even in the military this is true. The issue of undue command influence only comes up if the judge’s superior officer (such as the president) expresses such an opinion. Since neither the AG nor the president is in command of any civilian judge, there is no problem with their expressing an opinion on what the judge ought to do.

The real problem with the AG saying “lock her up”, if he were to do so, is that it would be as stupid as the President calling for documents to be declassified. If you think something should be declassified, do it. And if you think she should be locked up (which she should be) then prosecute her. Chanting it at a rally or tweeting it at the world, when it’s in your power to do it, just makes you look stupid.

I thought it impossible, but I now despise the media even more than evuh because they’ve forced me to defend Snoozey McSnooze Sessions!

He heard the crowd, was uncomfortable, mumbled lock her up and then chuckled nervously.

I don’t think he is a really good public speaker. No surprises there.

I cannot stand Attorney General Jeff Sessions and there is so much you can use against him that you don’t have to make up stuff!

I know that many people feel the same way.

asking for a friend.

Sessions should resign immediately. PDJT should then nominate someone who will fire mueller and disband the witch hunt. Win.

The Senate won’t give him another one.

This senate won’t. However I think should several more pro-Trump senators be voted in come November you will see a new AG very soon after that.

Until then, thanks to the Democrats like McCain, Flake and all the others you are stuck with Sessions.

Then we need to dissolve the Senate and elect another one.

I bet the Senate would give him Cohen. Just saying. … and Cohen would make Sessions look good.

The First Rule of Lying: Make it believable.

As Sessions is a RINO,he hasn’t the intestinal fortitude to chant Lock the Harpy Hag Up and throw away the key.