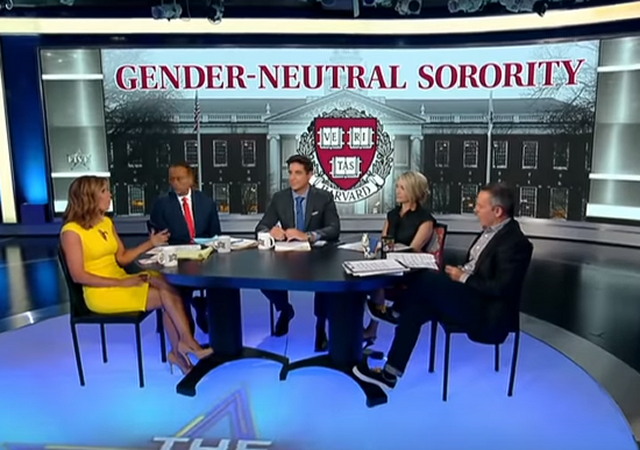 Last year, Harvard announced that in an effort to promote inclusivity, they would ban single-sex clubs. The penalties for non-compliance are harsh, including students who defy the policy are not allowed to serve in leadership positions on campus.

Women’s groups held out the longest, but even they are starting to come around.

The sorority on Monday announced its decision to disaffiliate from its national organization, change the name and become inclusive to people of all genders in the fall of 2018…

The administration is officially penalizing members of single-gender social clubs, with penalties such as barring members of such clubs from holding student leadership positions, varsity athletic team captaincies and even from receiving College endorsement for fellowships…

The sorority previously took a different stance. Last year, after Harvard administration voted to adopt the sanctions on single-gender clubs, the group released a statement pledging to continue its tradition of allowing only women to be the members, the Boston Globe reported.

Caroline S. Engelmayer and Michael E. Xie of the Harvard Crimson have more:

Harvard’s chapter of the all-female sorority Kappa Alpha Theta will become the gender-neutral social group “Theta Zeta Xi” and will disaffiliate from its national organization in the fall of 2018, the club announced Monday…

“This decision reflects our commitment to supporting our members as they take full advantage of the academic and leadership opportunities available to them as Harvard students, which we believe is central to our mission,” the statement reads.

Theta members voted unanimously to go co-ed, according to the statement.

Theta Zeta Xi CEO Rena N. Simkowitz ’19, a Crimson sports editor, wrote in an email that she met regularly with officials in the Dean of Students Office over the past few months.

“The unanimous decision to transition our group is the culmination of many thoughtful conversations,” Simkowitz wrote. “It was not an easy decision to make; however, we are excited and optimistic about the future of our organization.”

Elizabeth A. Rinck, director of communications of the international Kappa Alpha Theta, wrote in an email the organization is disappointed by the College’s enforcement of the sanctions, but supports the Harvard chapter’s decision to break ties.

“While we are saddened by circumstances that forced our sisters to make an impossible choice, we support their desire to form an organization independent of Kappa Alpha Theta and recognized by Harvard University, giving current and future members the ability to participate fully in college life,” Rinck wrote.

The Five did a segment on this story yesterday which you can watch below. It begins with an entertaining monologue by Greg Gutfeld then opens up to a group discussion.

What about single sex sports? Have those been eliminated yet?

Harvard should stop fooling around. And do the right thing (according to its lights).

Conflation of sex: male and female, and gender: masculine and feminine, respectively. That said, sorority is by definition a society or body of women (i.e. feminine females). The semantic games are afoot.

Why Not 1 lawsuit from a Harvard Student for being discriminated?

I have not been following this story.

Did Harvard alumni who belonged to sororities, fraternities and other single-sex organizations threaten to stop supporting the university, financially and otherwise? Harvard alums are probably the most powerful group on Earth. Did they do anything to defend the Greek system?

We are living in the Age Of The Oxymoron.

Hmm, maybe I’ll go back to school, and join a Havhad sorority.

Hmm, no, Havhad girls ain’t what they used to be (like the men, or boys, men no longer attend havhad).

Kappa Alpha Theta might be officially gender neutral, but does anybody really believe that any man trying to join won’t be harassed into quitting?

Somehow, I do not care about this. These fools brought this on their snowflake selves, with their dysfunctional sexualties and other hang ups. Losers all. Perfect Federal employees.

This, and obama heading the law rewiew: What a sh-thole harvard has become.

It’s all about CONTROL and/or narrative. These Dems/Progs have to run it all. They know how to live your life much, much better than you do. Just ask them.

Transvestites and feminists have ruined everything

This is the same thinking that has led the Boy Scouts to be Family Scouting, with girls and young women as part of the program.

There is some benefit in it, as the Scouting program contains values which are universal to good society. My concern is that Boy Scouts used to be a place for boys to learn how to be men, which has changed somewhat over the 50 years I’ve been involved. At least in the Boy Scout program, the girls and boys are still in separate units, with separate leadership. Yet, how long will that remain, when we have trouble recruiting adults to run the programs as it is?

I also belong to Alpha Phi Omega, which is a fraternity based on Scouting principles, and is a service fraternity (no house, only focused on doing service works) that is co-ed. It used to be for Eagle Scouts, but membership wasn’t high enough, so it opened to others, then opened to women to be a part of it. It works fine, but is markedly different from what it had been.

Our society has changed to where being a male is frowned on if you are “too male”. Gender roles now are fluid, even gender is fluid (supposedly), and we are all one. Supposedly. We are to pretend that there is no difference between men and women, boys and girls. What gets left out is the mentoring from role models for what is a good man and what is a good woman in society, and we are just people. Fine to a point, but estrogen and testosterone are ignored, and the differences in thinking and actions are tamped down and homogenized.

Society used to be family based, for good and for bad, and the created ties from family consisting mainly of a mom and a dad helped define roles and behavior. The family is breaking down. Government and political agendas step in to fill the gaps, and government and political figures find it easier to blend people to one size fits all. Power is gained through ostracizing those who don’t conform to party’s set rules.

And while all this is being done, nothing is asked about what harm is being done to all of society and all our interactions with others. Eventually the dam is going to burst, violence will rise. I think the rising numbers of followers of Islam, in some ways, is a push back against this gender neutrality thinking. As in most things when radical changes are made in one direction, there is an opposite reactionary movement.

I don’t think all this is done with bad intentions, yet, we can see the writing on the wall that it can and probably will lead to bad consequences. In the quest for making things equal, we are seeing widening divisions between people. Violence will follow, at some point, when it shows it cannot be sustained. Or it will end the programs, such as the Boy Scouts, or at least diminish them, because they offer little more than any other organization for the deeper aspects the members desire from them, even if they don’t know explicitly what those aspects are. Such is the Progressive programs.

Students at Harvard are legally adults. In what way is it legal for a school to ban adults from being in a club just because it is single-sex? It is not just fraternities (officially affiliated with the school) but ANY club even off campus. This is blatantly illegal in my mind.