Coin reads, “For the Redemption of Zion” 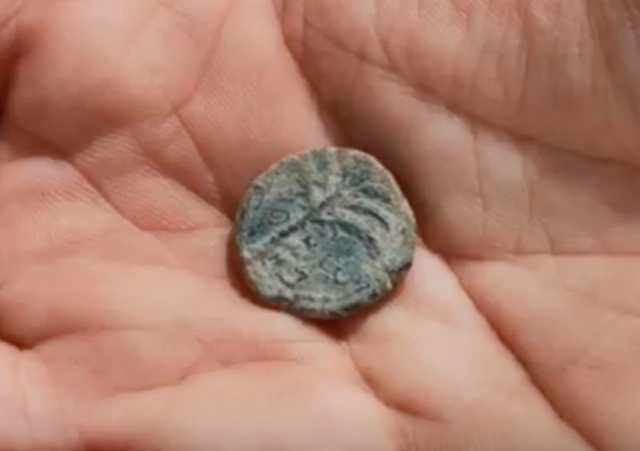 This is pretty incredible. a 1,900-year-old coin was recently unearthed in an ancient Jerusalem drain. Minted in the fourth year of the Jewish revolt against Rome (year 69), the coin contains the words “For the Redemption of Zion.”

An archaeologist with the Israel Antiquities Authority believes the coin likely fell out of the pocket of a Jewish rebel in hiding or was placed there intentionally. A Roman sword was also uncovered in the same location.

During the revolt, rebels used the city’s drain system as a hiding place.

Haaretz has the story:

It was discovered in the sewage system running beneath ancient Jerusalem, passing beneath the main road of the ancient city some 2,000 years ago, Reut Vilf of the City of David Foundation told Haaretz.

A cache of bronze coins from the time of the Revolt was found in 2014 in a village near Jerusalem. Yet more were unearthed in a cave by Temple Mount in 2018, from the second and fourth years of that ill-fated rebellion.

LIke others minted in the year 69, the coin found now bears the words “For the Redemption of Zion” in ancient Hebrew lettering, and a depiction of a chalice. Its other side depicts the so-called “four species” and the words “Year Four.” That is taken to refer to the final year of rebellion against the Romans, when Simon Bar Giora took over the leadership. Previously the Jews had been led by John of Giscala.

The coin could have been lost and fallen into the drainage system through cracks of the stone-paved road, said Eli Shukron, an archaeologist with the Israel Antiquities Authority. Or, the money could have fallen from the pocket of a Jewish rebel hiding in the drains below Jerusalem.

Hide there, they did. Yosef ben Matityahu, aka the Roman-Jewish historian Josephus, commanded the rebels in the Galilee and wrote in his histories about the Jews hiding in Jerusalem: “For they were not able to lie hid either from God, or from the Romans” (“The Wars of the Jews,” Book VI, Chapter 7:3).

“The coin was found exactly in the same place that Jews had been hiding in the drainage channel under the street,” Vilf says. Solid evidence of the rebels’ attempt to hide includes intact oil lamps for light and ceramic cooking pots that were found tellingly whole in the sewer itself.

“These objects couldn’t have fallen down there. They would have shattered. Since they were found whole, somebody had to put them down there deliberately,” Vilf pointed out. Excavators even found a Roman sword there.

Also, there is a telltale spot where the stone steps of the street seem to have been ripped out of place by soldiers looking underneath (“the last hideout“).

In short, Jews seeking shelter from Rome’s wrath and punishment tried to live in the sewers. The coin starkly attests to the morbid state of mind among the rebels in the fourth and final year: they had lost hope.

Never ceases to amaze me how the tiniest artifact can tell a huge story.

It was planted there. Everyone knows that the Jews do not have any ancient claim to Jerusalem – UNESCO says so.

My exact thoughts. The United Nations is a sad parody of its original charter. The First Rule of the modern UN is “Get enough anti-Semitic nations to ignore the factual basis for Israel’s connection to Palestine and history can be whitewashed.”

I know exactly how this guy felt, I looked in my change and found a wheat penny the other day!

(no it’s a great discovery, I just couldn’t resist)

Thank you, Kemberlee. Year 69 – a year later, saw the temple destroyed by the Romans. An artifact expressing the hope for Jerusalem found in the sewers … it certainly speaks to their tenacity. Simply amazing. G-d bless Israel and peace for Jerusalem.

Luckily lots of other evidence helps support claims on how the coin, pottery and oil lamp found their way into the sewers. Pretty cool stuff.

I wish the same could be said about the ancient Celts. Found artifacts only suggest or hint at cultural behavoir. We generally only know Celts through the taint of what Caesar or Tacitus (among others) wrote about Celts – and even moreso about the druid caste.

So much lost history.

I will leave out all the scatological details. But yes, or should I say butt yes, the toilet hobbits will yield up a greast deal of goods.