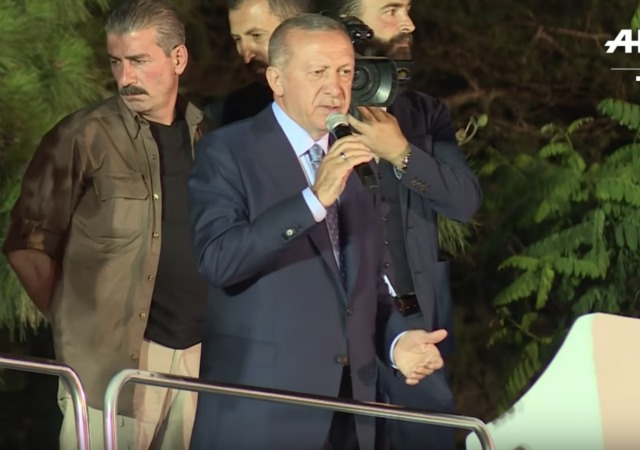 Recep Tayyip Erdogan has begun his new term as Turkish president by purging 18,000 more “traitors” from the supposed coup that took place in July 2016. From The London Times:

The decree specified that the 18,632 people to lose their jobs were suspected of involvement with organisations that acted against the interests of national security. They include 8,998 police officers, 3,077 soldiers, 1,949 from the air force and 1,126 from the navy. On the civilian side, 1,052 civil servants were sacked from the Justice Ministry and linked institutions, 649 went from the police, 192 from the coastguard and 199 academics lost their jobs. More than 100,000 civil servants have been fired since 2016, and the army is said to be significantly under strength.

More than 75,000 people have been arrested for connections to the Gulen movement, and many have been sentenced to long jail terms, including for alleged involvement in the coup. Named after its leader, Fethullah Gulen, the movement operated for years as a social support network with Mr Erdogan’s tacit backing, running schools and charitable foundations.

Because it had members inside the police, prosecution services and civil service, Mr Erdogan came to see it as a state within a state, particularly after corruption inquiries targeted some of his closest associates, including his son.

The announcement will let Mr Erdogan start his presidency on a high. Officials have indicated that after seven renewals the state of emergency will expire when its term runs out on July 19. Mr Erdogan may use his re-inauguration to scrap it immediately. That would mean that arrests could no longer happen by presidential decree. However, Mr Erdogan has shown no sign that this would lead to a shift to the democratic norms of which Turkey was once seen as a rare Middle Eastern example. Under the new constitution the position of prime minister, which Mr Erdogan held from 2003-14 and which he used to establish dominance over Turkish politics, will be scrapped.

Maybe President Trump needs to conduct a purge of his own! Start with the Dept of Justice!

The decree specified that the 18,632 people to lose their jobs…

I guess an optimist would say they’re only losing their jobs…not their lives.

It would be racist to say this has anything to do with Islam.

First, it would not be racist, as Islam is not a race. But mostly, it wouldn’t be racist as this about nothing more than a dictator maintaining his hold on power.