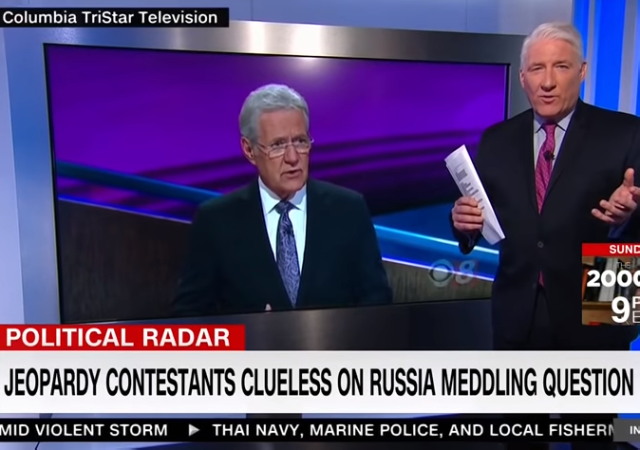 It’s just human nature. When you are obsessed with something, and you’re surrounded daily by other people who are obsessed with the same thing, you may be surprised when you step out of the bubble to find that most people don’t share your views.

CNN’s John King had such an experience over a recent episode of the Jeopardy! game show.

CNN host John King couldn’t believe no contestant on the popular trivia show “Jeopardy!” knew the answer to a question about the Russia investigation, wondering Friday what that said about the nation’s “focus.”

“Only the smartest of the smart get to be on Jeopardy, right?” King asked. “So what does this little exchange last night say about the nation’s focus, or lack thereof, on the whole [Robert] Mueller Russia meddling and collusion investigation?”

Two contestants buzzed in and responded incorrectly to the $1,000 clue Thursday night, “In 2017, this ex-National Security Adviser pleaded guilty to lying to the FBI?” One guessed John Kelly; the other guessed Sebastian Gorka.

King said he’d personally bomb on “Jeopardy!” but he knew the answer was Michael Flynn, who pleaded guilty last year to lying to the FBI about his contacts with the Russians during the presidential transition.

Allahpundit of Hot Air says this might be the most ‘perfectly expressed’ Twitter reaction. I’m inclined to agree:

if you needed another reminder of how thick the DC bubble is, three *JEOPARDY CONTESTANTS*, competing in America’s foremost trivia contest, couldn’t come up with Michael Flynn’s name https://t.co/Ky6aSfXuoS

These people are on television vying for cash prizes because they’ve demonstrated an unusual mastery of arcane facts, yet one of the showcase convictions in Bob Mueller’s Russiagate investigation is too arcane even for them. Any one of the three could probably rattle off the Latin names of every type of tomato but ask them about the probe that’s supposedly going to lead to Trump’s impeachment and they’re deer in the headlights. This is the proof that POTUS is politically untouchable. And CNN is worried about it!

It makes perfect sense that CNN is worried about it. They’ve staked their entire network on it.

CNN’s problem is that they’ve been on this 24/7 for what – two years, and yet “nobody” know about it? They keep forgetting – their US audience is a bunch of airport screens nobody watches.

To be fair the CNN website is very popular. That is perhaps where they expect the bulk of their influence. One of the things that aggravates me about Drudge is the willingness to link to CNN on general news items that could be linked to hundreds of other articles or reports. And also the occasional links to kooky Info Wars.

Why on Earth would I want to be fair to CNN??? They’re not fair to us.

Normal America long ago realized there is nothing there and they moved on.

Mueller’s investigation is a sham, a witch hunt to marginalize a legitimate US election. The only question we have is why has that corrupt POS been allowed to continue it for so long

Time to wrap it up. Then investigate Mueller’s deep state coup connections

The only time I’m around CNN is when I’m in airports. And when I’m there I have better things to do than listen to that claptrap.

Translation: America! We’ve been telling you how bad Trump is. How he colluded. How he’s a vulgarian (somewhat true). So there is something wrong with YOU if you haven’t accepted our presentation.

It’s also a sign of the disappointment from their ineffectiveness.

CNN was an active co-conspirator with a back door to Fusion GPS, McCabe, Comey, and Bruce Ohr.

Is this a signal for Trebek to get with the movement? Maybe screening contestants for GoodThink? COEXIST or get the Leftist Fist of Justice?

My question for AT&T management (CNN’s ultimate bosses) is, can that network’s ridiculous leftward drift in recent years be justified, from a business strategy standpoint and a shareholder value-creation standpoint? I would submit that the answer is plainly “no,” because the network is alienating a huge number of potential viewers from a a large swath of the country. Sure, a good deal of purchasing power is concentrated on the coasts, where most of CNN’s diminishing viewership resides, but, does a network want to write off the rest of the country?

It’s not business strategy or success that drives the managers. Their religion is Progressive Fascism and that overrides their financial concerns.

Actually, the conclusion that “people don’t care” is unwarranted. It’s entirely possible to be very concerned about the case, even obsessed—to the point of performing nightly human sacrifices to Rhadamanthus, praying for lightning bolts to strike Trump where it hurts—and still be uninterested in charges against the bit players.