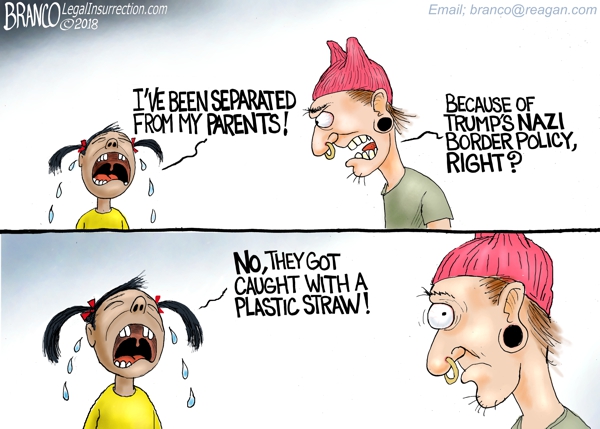 “Sucks doesn’t it”
ISWYDT, but it took a bit…

This ban is beyond silly.
What about people who NEED a straw? Arthritic hands, stroke victims, loss of a hand, bed-ridden, etc. what happens to them?

One rule for all. Progressives just Obamacare’d drinks.

Straws are more hygienic. The sides of glasses get germs.

The straw ban is virtue signalling at it’s most absurd level yet.

“What about people who NEED a straw? Arthritic hands, stroke victims, loss of a hand, bed-ridden, etc. what happens to them?”

They are just bumps in the road to a new society, free of the inferno and other inferiors.

There is harm done due to straws, but as usual with the left who push these things, it is blown way out of proportion.

I typically don’t use straws, but that is my choice, and most likely the straw that was given out with the drink will still be put in a landfill. Yet, most of that doesn’t get into the ocean.

Will these idiots next come up with reusable straws or biodegradable straws? And they use a number of 500 million straws are used each day by Americans… based on a fourth grade kid who called straw companies to see how many straws they make. So it was a Wild Ass Guess to the number used each day.

The left will fall for just about any “cause” and make a stink about it. Just more proof of the emotional dysfunction over taking the left, leaving no room for intellectual thought.

And the above, it will happen as one California town is talking about arresting waiters and waitresses who give out straws. (Kind of reminds me of Guthry’s Alice’s Restaurant song where he is arrested for littering).

What, do you think that company makes products just to throw them away?

Plastic straw bans are a piss in the ocean for sure, but single-use petroleum products are a valid environmental concern.

What this has to do with the US’ past and current barbaric asylum policies is anyone’s guess..

There is no “garbage island” in the Pacific. There is an area where there’s a slightly higher concentration of plastic than usual, 4 microscopic particles per cubic metre. It’s invisible to people who are right there swimming or boating, let alone from a distance. No harm could possibly come from it to anybody or anything.

It is possible the numbers the kid got is wrong, yeah.

The issue isn’t so much the concentration of particles as it is the plastic getting into the food chain, due to marine animals mistaking it for food. This results in bio-accumulation of all kinds of nasty crap, the long-term effects of which may not be known. Plastic straws have little to do with that however

What’s the problem if plastic gets into the food chain? The long-term effects are not known, so why jump to the conclusion that they’re bad? This is the pernicious “precautionary principle”, which reflects a fundamentally paranoid view of the world as a hostile place.

I’m unconcerned about it in the “food chain.” I’m unhappy when I see photos of a turtle whose stomach is filled with plastic crap. I feel bad for that turtle.

You seem to assume plastic itself is inert, and that plastics have no potentially harmfully additives. The latter is less and less true these days, much in part thanks to research.

I assume nothing a priori about plastic; without knowing its effects we can suppose they might be harmful, neutral, or beneficial. There’s no reason to suppose one over the other. Therefore the “precautionary principle” is at least as likely to be harmful as helpful, even ignoring the direct costs of following it; when you factor in those direct costs it’s a sure loser.

There are about 200M Fourbux straws in the back of my Subie at the moment. I think of them as a 7th airbag.

Nine million TONS of plastics are dropped into waterways ANNUALLY…mostly in China. Of that, 2,000 tons are straws. That’s it.
Perspective.

Any business that decides to comply with this foolishness will not get my money. Period.

If I happened to get a drink without a straw, I’ll request it. If denied, I’ll walk out of there without paying.

It really is hard to understand the “progressive” mind.

Yup, these freaks have their priorities.

Oh, forgot the most important part – Great Cartoon as always Mr. Branco. My initial response is an indication of what makes your cartoons so good – they make you think. Those that still can.

So how long will it be until there’s a fatal car accident because the driver was drinking from a 32 oz cup which obscured the driver’s vision? A problem that didn’t exist when it was OK to drink from a straw.

The same fools in gov’t ban the use of cell phones while driving because it is a distraction – only to create a new distraction by banning straws.

Careful. We might all be required to drink from 5 ft long re-usable flexible straws while driving which connect our mouth to the drink held in the special box which cannot be unlocked with the key in the ignition. There is no problem that a liberal can’t solve with a requirement that isn’t worse than the initial issue.

May be one of your best Mr. Branco!

Still … not one single word said about the children who have been removed from Americans who are going to jail or prison. No compassion for that situation … evidently.