Not your parents’ Democratic Party 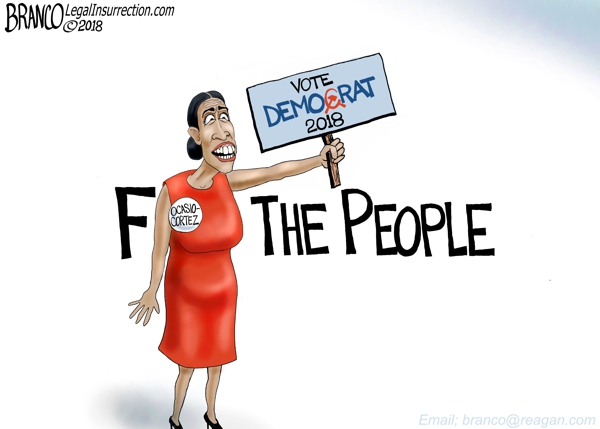 There is a part of me that worries that there are enough week-kneed GOPers that have no problem with big government that they just might entertain ideas of the hard left of the Dem party even though they would be a small minority. Reading now that another Ocasio-Cortez type of person is running in WA. I can image tens of Dem Socialists being in Congress very soon.

And the party in power that cannot muster a vote on actually building a wall while gleefully passes $1.2 billion omnibus spending bills is clearly thrilled with the idea of buying votes by giving out stuff. Why wouldn’t they start to entertain ideas like universal healthcare? It comes out of the mouth of some already who say “we are headed that way anyway with such rising costs….” etc.

There’s already 70+ members of the Progressive Caucus. The vast majority of them are stone-cold socialists and will eagerly welcome her under their cloak.

They’ll be emboldened to show their true colors. And they’ll have millions of spoiled brat millennials who will believe in them, thinking they can just coast through life while others toil.

We’re the last generation who will fight for Freedom, and we’re dying off

This is a good approximation of her body in five years.

Still cute as a button.

Want the number of my eye doctor?

No thanks, I’m blind. I was reading with Braille.

Only in an ethnic Orphan Annie kind of way; what with her empty black-hole like eyes that vacuum up every dark and self-serving idea she sees and subsequently regurgitates later with no considered understanding.

“Not your parents ‘Democratic Party’.”
I should say not. They are no longer democratic.

The Democrat Party has been moving this way a long time, FDR was in love with the socialist ideas, and his “New Deal” fits well in line with this. That and his relationship to “Uncle Joe” (his term for Stalin), which was more cordial than with Churchill.

The ever growing role of government control over things from the left (and that unfortunately includes some in the Republican Party) and the government bribing people for their votes through giving them “free stuff”, while never seeing a tax hike they didn’t like, and the Union stranglehold the D’s have on them, it is more like they were in hiding of their true desires and goals.

This nut – Occasional Cortex is not that far out of line with many in her party, she just states out loud what the others want but won’t say because it could drive voters of the swing variety away.

So, in an odd way, it is the old party, but with some honesty – along with a ton of stupidity – that makes her seem different.

I’m noticing an increasing uniformity in how women look and dress these days and a disturbing increase in obesity in young women I see on the street.

The follwing video focuses on a Turkish Feminist Cult controlled by Cult weirdo Adnan Oktar – who was arrested earlier this month – the women are botoxed and surgically altered to all look alike – very very disturbing but needs to be watched: https://www.youtube.com/watch?v=7bH21w2R0hc

I rarely comment on a man’s artwork however, I would like to point out she looks far too sane.

The light and shadows make the dress appear to be see-through, from the waist down. I just noticed,,, pretty funny.

I guess this means that our whole country wants to be like Russia? Especially so, since Trump has his nose so far up Putin’s backside and everyone is apparently OK with that? Trump must have a hammer and sickle t-shirt on right now, yes?

Is making AOC looks like an old lady all you can muster? I’m disappointed tbh. I come here to look at right-wingers outraged at even milquetoast social democratic ideas. You’ve let me down, Branco

xporter769: The USSR seized to exist nearly 30 years ago, the Russia of today is better described as an autocracy ruled by rich oligarchs barely held in check by Putin’s gang