Branco Cartoon – Not So Cheap Seats

Branco Cartoon – Not So Cheap Seats 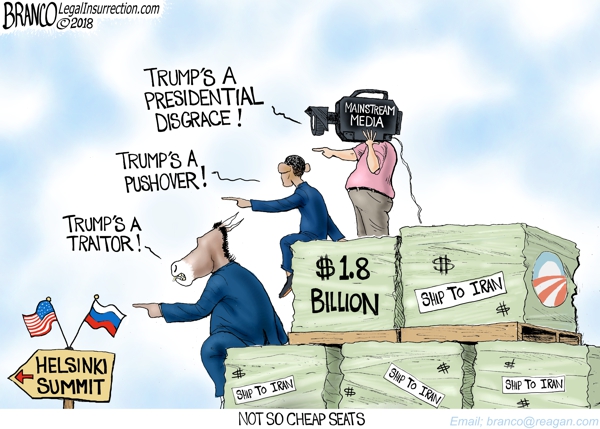 They were going to use the same talking points no matter what he said or did. I wonder how much of those millions are in the hands of terrorists as we speak.

Yup. They gave away the game when Deep State Rosenstein indicted more Russian bogeymen out of the blue right before the summit.

That action by that rat was no coincidence. It was a bait that Trump refused to take, letting the usual suspects expose themselves as traitors once again.

The DNC already had an alternate false narrative in case Trump took the bait.

Funny that they have such a short/selective memory… Every single one of them.. TY

Nice work using the Iranian payout as a metaphor for cheap seats. I wouldn’t have thought of that.

The Dems are so frightened Repubs will retain control of Congress in upcoming election. Why are they scared? Think about it. National Intelligece Director, CIA Director, Director of FBI, are all involved in politics! When was the last time that happened? They are. scared s___less that the criminal acts they were part of will come to light. Dem majority would protect them. This 2018 election is so important. Get out and vote.

They have both houses already. Why has nothing been done yet?

Still holding my breath waiting for the Media to investigate China’s meddling.

What I find most ironic is that the Dems are using the EXACT words that the rest of us used to describe much of what went on during the Obama administration’s so called “faux scandals” and the HRC investigations. And they just do not understand why I’m laughing at them.

Another brilliant cartoon by A.F.Branco! He says more in one cartoon than most of the print writers can manage with thousands of words.