“Doctors have treated the boys and now all of them are okay and cheerful, and are talking normally.” 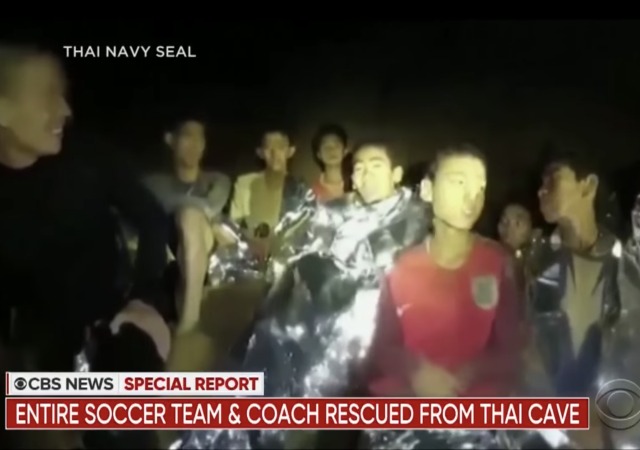 AMAZING. Authorities have rescued all 12 boys of the Thai Wild Boar soccer team and their coach after two weeks trapped in a cave. It took three days to bring them all to safety.

Four rescuers, three Thai Navy SEALS, and a doctor are still in the cave.

The doctor and SEALS have been with the team since the beginning.

Translation: 12 boars and coaches leave the cave and then everyone is safe. Hooyah.

“While waiting for all the boars to come out, why will not we relax ourselves a little bit,” the SEALS wrote on Facebook. “Do you know that new baby boars usually have stripes on their skins, and, those stripes will be gone when they grow up? Yes, that’s right. The wild boars generally eat trees’ roots and herbs. One of the behaviors of wild boars is that they gather in group. And you khow what? Tonight, all the “Wild Boars” will be in group again!”

Doctors have kept the families away from the boys due to possible infections. After spending weeks without eating, the boys are being fed porridge to ease their digestive systems back into processing other foods.

Overall, the boys and the coach appear well considering they spent almost three weeks trapped in a cave! From The Washington Post:

Doctors attending to the eight boys who have been rescued from the cave in two groups of four on Sunday and Monday say they are generally in good health — an incredible result for the boys who have spent nine days incommunicado, without food, until they were found, and then waited days more before embarking on an hours-long dive that even the most skilled cave divers have described as among the most dangerous they have attempted.

A retired Thai navy SEAL died Friday after he ran out of oxygen while placing compressed-air tanks along the exit route.

“Doctors have treated the boys and now all of them are okay and cheerful, and are talking normally,” said Jesada Chokedamrongsuk, from the Thai Ministry of Public Health. One of the boys initially had a heartbeat that was too slow, and some had low white blood cell counts, but they have since been stabilized. Two have been treated for minor lung infections, doctors added. They were all treated for rabies, in case of bats in the cave, and tetanus, and set up with IV drips.

None of them have fevers, and all are able to eat normal “medical” food, the doctor said, an improvement from the watered-down porridge they were fed when they were first rescued. A nutritionist is monitoring their diet and has recommended that they eat nothing spicy or salty — despite the boys’ cravings for spicy basil pork and rice, and grilled pork.

Thanks be to God!

“They were all treated for rabies, in case of bats in the cave…”

Ouch, ouch, ouch. (unless they’ve improved that treatment a lot)

A moment of silence for the brave Thai soldiers and volunteers who risked their lives to save these boys, and for the lost.

Kudos to the Thai Navy and the many volunteers for getting all the kids and the coach out safely. Job well done!

Excellent!! Amazing what can be accomplished when ingenuity and courage come together.

And let us not forget the diver that gave his life for the effort. God bless him.

If I were one of the boys, I would posthumously adopt him as my older brother, remembering his bravery and hoping to honor his sacrifice by trying to live the best life I could.

I’m very pleased to hear of this. I have visited Thailand a few times, and have come to like her people quite a bit.

Just think, when those kids get back to school, they won’t be allowed to play dodgeball, it’s too dangerous.