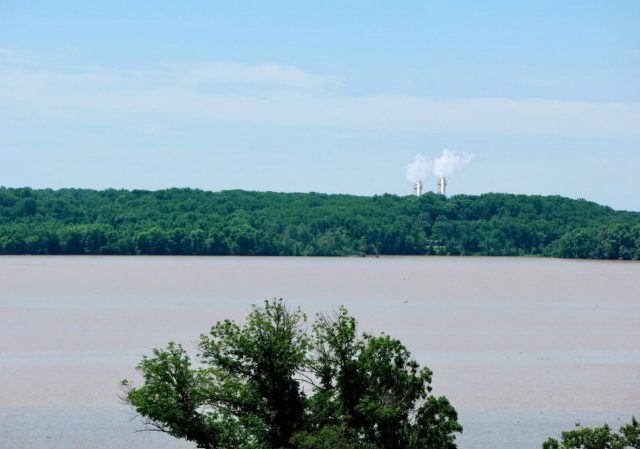 For the last few weeks, George Washington’s Mount Vernon and Dominion Energy have been engaged in a nasty and very public PR battle over Dominions plans to build a compressor station just across the river from the first president’s home.

The energy company has plans to construct a compressor station directly across the river from Mount Vernon. The project would change the landscape views, adding two smokestacks to the otherwise serene and mostly unaltered view from the first president’s plantation home.

A map of the proposed construction shows the Dominion Energy project in red, directly across from Mount Vernon, pictured in purple. 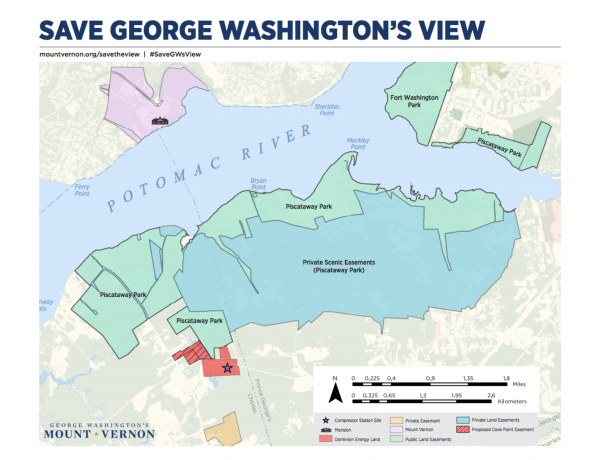 Mount Vernon’s campaign included an online petition, hashtag, #SaveGWsView, and a lengthy recitation on why the plans for new development were dangerous for this historical sight.

Perfectly timed (draw whatever conclusion you will) with the #SaveGWsView campaign, the National Trust for Historic Preservation listed Mount Vernon as one of America’s 11 Most Endangered Historic Places.

But all of that is gone from Mount Vernon’s “Save the View” page. Now, there’s just one paragraph explaining how the two entities have joined forces:

Dominion Energy and George Washington’s Mount Vernon are now working together to find an alternate location for Dominion’s planned Charles Compressor Station, which is a part of the Eastern Market Access Project. As we work towards finding a mutually agreeable solution, we will share more details regarding the new natural gas compressor station location.

Hopefully, they’ll come to some consensus here, one that allows capitalism to capitalize and maintains the viewshed of Mount Vernon. George Washington’s home deserves at least that much.

Good for Mt. Vernon for putting a stop to this. There are better places for the compressor station.

and just where would you suggest putting the plant

NIHBY – Not in his back yard

Would the preservationists running Mount Vernon be so quick to stop progress if they know of George’s comments found in his first State of the Union (01/08/1790)?

“The advancement of agriculture, commerce, and manufactures by all proper means will not, I trust, need recommendation; but I can not forbear intimating to you the expediency of giving effectual encouragement as well to the introduction of new and useful inventions from abroad as to the exertions of skill and genius in producing them at home, and of facilitating the intercourse between the distant parts of our country by a due attention to the post-office and post-roads.”

1.) The words “producing them at home” doesn’t mean literally at anyone’s home. It means inside the borders of America vs. some other country. He also never advocated developing every single square inch of land. To the contrary, Washington bought thousands of acres and left them undeveloped to not just buffer himself from others but to make sure they weren’t overrun.

2.) Washington never put a farm or a distillery or a grist mill or anything else but low greenery and gardens on the East or West sides of his house. Why? Because “no estate in United America is more pleasantly situated than this.” He built a piazza on the river side of his house and plopped down a line of Windsor chairs so he and visitors could enjoy the view.

Before the portico a lawn extends on each hand from the front of the house and of a Grove of Locust trees on each side, to the edge of the bank. Down the steep slope trees and shrubs are thickly planted. They are kept so low as not to interrupt the view but merely to furnish an agreeable border to the extensive prospect beyond. The mighty Potowmac runs close under this bank the elevation of which must be perhaps 250 feet. Beyond this Sheet of verdure the country rises into bold woody hills, sometimes enriched by open plantations, which mount gently above one another till they vanish into the purple distance of the highest ridge 20 miles distant.

On the opposite [East] side is an immense portico supported by eight pillars. It is from there that one looks out on perhaps the most beautiful view in the world.

If you have ever visited Mount Vernon and sat in those Windsor chairs you have the opportunity to look at the countryside exactly as Washington did. It is a blessing to be able to do this so close to not just any large city but our nation’s capital, and for just a few minutes forget that down the river is a town so corrupt and full of contempt for the Founders. Sorry to be so crude here, but I consider the ability to do that a well-deserved F You to those jerks.

Keep the view as it is.

Who should pay for the view? I’m not aware of any “property rights” to a view. I have a friend in California who had a great view of Morro Bay from his living room until his neighbors’ trees grew up and blocked the view. I think my friend payed to have those trees topped, but they’ve probably grown up again.

Private property versus public property. I’m guessing Dominion decided the battle with the public whether local or national was not worth the risk to reputation and bottom line if the fight were protracted.

Of course there is no right to a view. No one is arguing whether that should be the case.

The issue is: do you prefer to change something that’s been unchanged for more than two centuries or do you not? That’s it. Do you value the uniqueness here or do you not?

I’m not a fan of blocking off land all over the place and NIMBY can get way out of hand. But I’m guessing your California friend wasn’t the first president of the United States, correct? Is there literally nothing sacred in America? We’re not talking about the worthless Kennedy drunks, it’s the father of our freaking country. If you can’t make an exception in the name of his legacy, what principles are worth it for you?

I am a fan of progress, I’m also a fan of not screwing with something if you don’t really have to. There’s a difference between change and necessary change. I prefer the latter. The fact that the energy company and MV have apparently reached a compromise means there is another way that will satisfy both sides. I do not understand why this would be a problem with anyone.

I didn’t mean to downvote!
Those chair should are a lovely respite after a walking tour of all the grounds at MV.

Yes. No more smoke stacks… put up 50 wind mills. If it’s ok to ruin rual Oklahoma and Texas, New Mexico, Colorado views.. it’s good enough for the libtards that demand all this crap for the rest of us. Protect our view! That’s precious.

It’s a natural gas compressor station; not an energy producing station. They are moving the gas to the energy plant.

It’s not coal-fired, there are no smokestacks.

This better be far from the river. The country is undergoing enough agony rehabilitating Chesapeake Bay without adding another source of pollution, no matter how small. All of these rivers and estuaries need organic buffer zones.

It’s a natural gas compressor station; not an energy producing station. They are just moving the gas to the energy plant.

If Mount Vernon wants to own that view, let them buy it.

The land right across the river was bought decades ago and donated to be run by the National Park Service. The issue is shoving smokestacks behind that land.

I was wondering about that point myself.

The project would change the landscape views, adding two smokestacks

This post has the same info. that every single news story I’ve read about this has said – smokestacks either 113 feet tall or 50-feet tall, depending on proposals based on info. the energy company itself had given to local/state gov’t permits, etc.

Of course they called them “smoke stacks”; they’re environmental activists, as opposed to environmentalists.
Those columns are actually vents for the natural gas firing used to power the compressors. It is NOT a coal-fired plant, fer cryin’ out loud.

But they’re just activists; they aren’t required to be truthful.

This was never about the view from Mount Vernon. This was about the militant environmentalists opposing any fossil fuel infrastructure project. Dominion had demonstrated with a big red ballon that you would not be able to see the 50 ft smoke stacks, but it wasn’t enough to stem the protests and misinformation campaign being waged against Dominion.

Funny reading the comments here. A business – Dominion – made a financial decision based on the public risk and calculated costs. I’m certain if that location for the compressor station were so beneficial to the operating costs that few other locations would work the fight would go on.

The fluid dymanics of moving compressed gas through the pipeline for the distances, elevations, quantities, gas composition, etc. and doing so within the existing national and municipal land-use / environmental / safety / FERC restraints is a very complex problem. It isn’t just a matter of moving it somewhere else.

If you move the station further down the pipeline, then you need higher compression getting the gas to the booster station, and the pipe wall thickness might not be designed for or have enough of a safety factor to allow it. Moving the station further upstream means you need a bigger station, and thicker pipe-wall to traverse the further distance.

And they’re going to have the same NIMBY problem in the new location, too.

I am reminded of the local power company’s transformer installations in my neighbourhood.

They were all installed where the power company wanted them, and painted bright, fire-engine red.

When the expected fire-storm of protest erupted, they caved, and painted them all a soft, pastel green.

“Well, that’s all right then,” said all the protestors, and went home.

Result: the transformers were where the power company wanted them all along, and the enviro-weenies thought that they had won – problem solved.