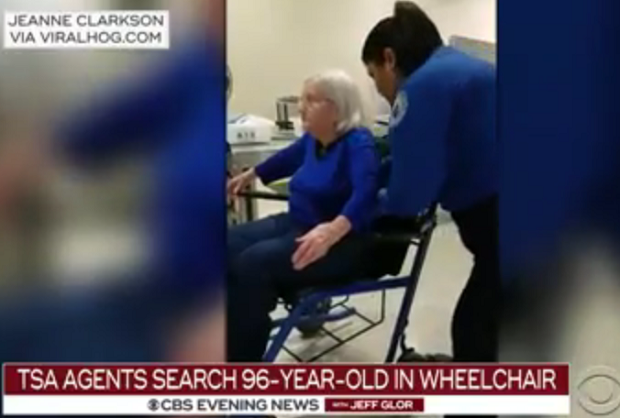 We’ve long covered the many outrages perpetrated by the TSA, and this latest incident joins the ever-growing list.

Nearly 9 million people have watched the video — and many have weighed-in about the security pat-down of a 96-year-old woman in a wheelchair. The screening happened at Dulles Airport in Washington.

The woman’s daughter complained that the 6-minute search was quote “prolonged and repetitive.”

A woman can be heard criticizing the TSA agents in the video. “What the hell do you think she’s going to do? Set off a shoe bomb?” she asks.

“I was just shocked. I’ve traveled with her before, I’ve been in a wheelchair myself unable to walk through the machines and I’ve never had that kind of a pat-down ever. I was just shocked. I couldn’t believe they were doing this to my 96-year-old mother,” Jeanne Clarkson told CBS News transportation correspondent Kris Van Cleave. “It was just shock, and frustration because they would not talk to me. I felt helpless.”

Dulles and the TSA have responded to the incident.

Washington Dulles Airport posted on its Facebook Page, “Many of you have reached out to us to express concern over a video of a security screening taking place at Dulles International Airport. Security screening at our checkpoints is directed and conducted by the Transportation Security Administration (TSA). We have shared customer comments with the TSA for their immediate review and appropriate action.”

. . . .  In a statement to CBS News, the agency says “TSA is committed to ensuring the security of travelers, while treating all passengers with dignity and respect. In this instance, the TSA officer provided advisements during the pat-down and was extremely polite. The passenger was very cooperative and gave no indication that she was agitated or in discomfort. She received a pat-down and was cleared for her flight.”

2. legs/arms in casts, or artificial limbs

4. coffins (not as popular, because it’s too obvious)

These are favorites because the Permanent Outrage brigade will provide cover. Free of charge.

Easily answered with a hypothetical:

Q: What if TSA exempted people over a certain age in wheelchairs from searches?

A: A month later, some terrorist group would smuggle a bomb into an airliner in an old person’s wheelchair.

Still, that’s no excuse for not conducting yourself politely when searching great-great-grandma.

Q: What if TSA adopted the methods and practices of Israel and El Al airline security?

TSA is another out of control bunch of government losers. They are the reason I quit flying and I will forever resist their expansion. I drive or take a boat or ship.

I look at cost versus benefits. It is not just TSA, airlines have themselves become more arrogant and sleazy since 9-11. They are frequently incompetent.

I travel dressed casual, with a suit or Tux packed. Trips for speaking engagements or business meetings at places like MIT, Harvard, in one case a business meeting in Hawaii were made living hell over lost luggage.

Canceled or delayed flights were common. Winners like Northworst Air, who managed to smash my new $4500 notebook computer. They never paid for it.

Now I am retired, and I go to great lengths to not fly. There is just too much bullshit.

Hmmm!!
And how was your cruise Mr. Klinghoffer?

I will never fly again. Not that I have too many opportunities, but…nope, never again.

This thread will be a great litmus test to separate the Citizens from the Subjects.

Tom and Georg fell right into line as obedient subjects.