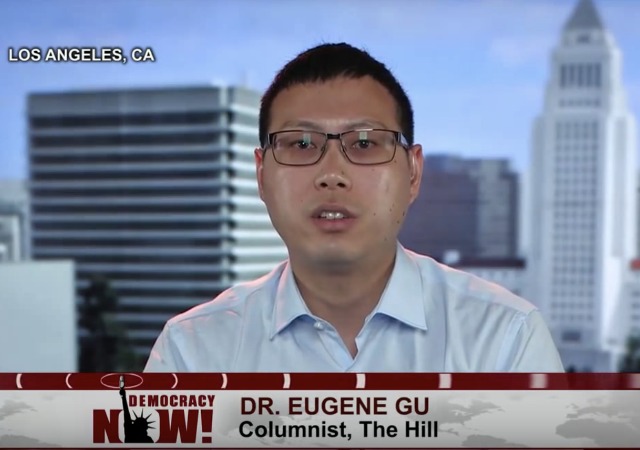 I just rolled my eyes so hard I’m shocked they’re not stuck in the back of my head.

Now Dr. Gu claims Vanderbilt refused to renew his contract politics and racism instead of taking responsibility for his actions. Gu’s claims don’t tell the whole story. The hospital refused to renew Gu’s contract due to disciplinary action for “work performance and professionalism.”

“The take-home message here is that there is an unwritten rule for surgical residents and that is rule is, always make your program look good and always make your hospital look good, and often that means stay silent,” Gu said. “But as an Asian-American physician, unlike a white doctor, I don’t always have the same luxury to stay silent.”

Vanderbilt said in an email statement Friday that the decision not to renew Gu’s contract was not a result of his criticism of Trump, his lawsuit, or his public opposition to racism. The hospital has said previously that all disciplinary actions against Gu relate to his work performance and professionalism.

“Regarding other allegations that Dr. Gu is making about the Medical Center, I would ask that you please consider these as allegations and nothing more,” John Howser, a spokesman for the hospital, said in the email. “To date, we have not engaged in a point by point rebuttal of Dr. Gu’s many claims over the past two-plus years. At this time we will continue to maintain this stance.”

When you have nothing left, pull the race card!

The Duke Chronicle reported in January that VUMC placed Gu on administrative leave in November 2017. A patient’s mother supposedly complained about Gu after he took a knee to protest white supremacy.

VUMC said officials placed him on administrative leave due to performance issues. They used the same reason in their decision not to renew his contract:

After an appeal, a May 17 letter to Gu from VUMC General Counsel Michael Regier—delivered at the request of Jeffrey Balser, president and CEO of VUMC—cited a “lack of sufficient improvement in performance and conduct in key areas” after the probation. The letter, which was obtained by The Chronicle, indicated that the most “significant areas of concern” were “patient care, communication, and medical knowledge.”

Gu claimed that the work environment at Vanderbilt became hostile after his leave and VUMC’s response went public. He said one time his colleague “nit-picked” his details on a consult call since he didn’t provide what he found irrelevant information.

Now all we have is Gu’s word because VUMC has repeated over and over that the hospital has a “policy against discussing ‘specific performance issues of our employees.'” Here’s a good point:

Um…Vanderbilt was right. You don’t tweet about patient interactions that can potentially be traced back to that patient…it simply is unethical.

For you to whine about it now shows you didn’t learn anything in the first place. https://t.co/5gaacwVoYu

If you, as a medical professional, had a problem (and maybe there was a legit problem here) you talk to them IN PRIVATE LIKE A PROFESSIONAL.

Not like a little toddler wanting to have a public tantrum.

Furthermore…though we don’t like it…patients get to pick their doctors.

I’ve had this happen to me. I walked out, handed the chart to someone else, and moved on. It isn’t fun, and it isn’t right, but it is what medical professionals do.

Also, considering the way Gu has acted here…I don’t think we should take his word about retaliation.

Maybe he is right, but I wouldn’t give him the benefit of the doubt on that.

If you’ve never seen anything from Democracy NOW, you’re in for a glimpse of the real loony left.

He also had an ethical problem with his research. He applied for a grant and HSRB permission to do one type of study using fetal tissue and then did something completely different.

To quote a movie from years ago, “Go sell crazy somewhere else, we’re all full here”.

Gu said “But as an Asian-American physician, unlike a white doctor, I don’t always have the same luxury to stay silent.”

I wonder why an Asian-American doctor does not have the same luxury.

Try thinking while you wonder.

Obviously his race trumps everything including his ethical, professional and legal standards and duties.

Seems like a classic ‘he said, they said’. Would you expect VUMC to say, “Yes we fired him for political reasons”? Then again, this article sheds no light on whether he was no competent.

It does provide a good gloat since you really don’t care why he was fired. It is still a win for the good guys.

Incorrect in one main point. It’s not just that I don’t care why he was fired, I don’t care that he was fired. I also couldn’t care less if he lives, dies, or grows mushrooms his buttcrack.

Oh, yea and here is a hint, you have to be a real screw up to get fired from a residency. Also its a University hospital which means liberals abound, he wouldn’t have been persecuted for challenging Trump, quite the opposite in fact.

Sounds like the classic, ‘he has an ethical duty to keep his big yapper shut but won’t’.

How much do you get paid to derail threads? Or are you carrying water for the evil people of the world for free?

Scary to think the SJW religion has so infected the educational institutions that a medical practitioner would no longer prioritize patients’ wellbeing above all else.

With how leftist the Colleges and Universities are these days, it seems to me that it would be an enhancement to his resume’ to be anti-Trump and outspoken about it. That kind of shoots the political angle in the foot, as I doubt the administration of Vanderbilt would be the outlier and have even middle of the road politics, you don’t get to be high up in “Higher Education” and in administrative positions by belonging to the wrong political group.

As to race, all these institutions of Higher Learningment (yes I know that is made up) having diversity is king, even over talent, race plays a large part, as does the usual alphabetical sexual confusions, so they wouldn’t be letting him go, he wasn’t really fired, just not rehired, unless he was a total dunderhead, or was outspoken in a conservative manner, which I doubt given the statements known that came from him. So racist motives are also blown out of the water.

I guess he is just pulling a Hillary moment, and placing the blame squarely on the shoulders of others, rather than his own incompetence.

It’s so embarrassing when somebody doesn’t get the memo.

This guy seems unaware that Asian males are lumped in with white guys so far as the race baiter/social justice crowd are concerned.

I’m a physician scientist at a university and a former program director:

1) yes, residents ARE required to abstain from activities that make their programs look bad. Frequently that means keeping your mouth shut and working through channels. Residents are trainees; they should assume that they don’t know everything. Millennials sometimes find this to be a challenge.

2) advice to all medical professionals, especially trainees: do politics on your own time. When you’re in the clinic or hospital, you’re on our time. Behave accordingly.

3) patients indeed can pick their doctors. If you are a resident, shut up and let your attending handle it. Sucks but that’s how it is. As an attending, I have on a couple of occasions informed patients that they may leave my hospital and go elsewhere for their medical care if they don’t like being treated by my residents. But that’s MY job to enforce, not that of the resident.

I am a 20+ year Nurse and I agree with this 100%, do it on your own time. However, I doubt that politics alone was the motivation to them not renewing his contract. More likely it is just the “Straw that broke the camel’s back” so to speak.

Kind of reminds me of someone else who under performed and decided to draw negative attention to himself…Ugly kid..played football…Colon Kipernick or something like that.

Also as an addition after years of working with and around Residents it has been my experience that the really successful and talented ones are to damn busy to worry about politics, especially if they are a surgery specialty.

I never will forget the day that 3 residents came sliding up to the Nurses station asking; “Where is the 12:30 knee?” and I just pointed down the hall and told them the knee left 5 minutes ago. See the attending in this case required his residents, Ortho in this case, to evaluate and initial each case that he assigned in surgical marker. You did not want to have him not find your initials on the case he had assigned. Well the three stooges just blanched and turned white and took off at a dead run, which of course was too good to miss so I stood at the door and watched as they tried to stop the gurney with the patient on it before they made it through the surgery doors. Now of course we never ever, as professional nurses, made a game of making them think we weren’t going to slow down or stop for them, LOL. (Ok, we did have one transport tech that would start singing the Benny Hill theme song at times, but I am sure that was just a coincidence.)

“…unlike a white doctor, I don’t always have the same luxury to stay silent.”

What is he saying here? That’s it’s OK if white doctors are silenced by their employers? That if a white doctor is silenced by his employer that he should just suck it up and not make a fuss? Or that he (Gu) should be permitted to act up and draw negative attention to his employer, even in a situation in which a white doctor would not be allowed to do the same? Not sure of his message, but I’m pretty sure I’m hearing dog whistles.

The letter, which was obtained by The Chronicle, indicated that the most “significant areas of concern” were “patient care, communication, and medical knowledge.”

If you don’t do this, we don’t pay you. Goodbye.

I actually like this guy and hope he doesn’t fade too quickly. It’s just not for the reasons he conjures up in his fantasies.

He’s a shining farcical example of leftists claiming victimhood inappropriately for the sake of convenience. He puts the entire practice on a pedestal and proceeds to unintentionally destroy it with a monsoon. What a useful creature he has become.