Tom Steyer is the progressive billionaire leading an effort to elect Democrats for the express purpose of impeaching Trump. He thinks of his particular brand of Trump Derangement Syndrome as an extension of the civil rights movement.

He said something in a recent interview with Tim Dickinson of Rolling Stone which reveals the depths some on the left would sink to in order to get Trump:

For many progressives, it’s obvious that President Trump deserves to be impeached. From his campaign’s collaboration with Russia to his admitted obstruction of justice in firing James Comey to his profiting from the office of the presidency to his ceaseless lying and attacks on the free press – the articles of impeachment almost write themselves…

Rolling Stone reached out to Steyer to talk about the practicality of removing Trump (which would require a two-thirds majority vote in the Senate to be successful), the risks of “normalizing” the president’s behavior, and whether Steyer himself has greater political ambitions.

Dickinson eventually shifts the conversation to Pelosi, and Steyer let the mask slip:

Maybe I wasn’t clear, the idea is that Democrats, returning to power in the House, would have subpoena power. She pointed to how she dealt with George W. Bush – whom many wanted to impeach. She believes the decision to take impeachment off the table helped Democrats take the House in 2006, and paved a path to Obama and a deeper correction.

I remember 2006. What happened is that George W. Bush, he put us in two disastrous wars and we were headed toward the biggest financial disaster since the Great Depression. So if the answer is that we need those three things to happen for a course correction, I’d prefer to move a little quicker. How about that? But I take your point. Maybe we can have, like, a nuclear war and then we get a real course correction.

Steyer then tried to walk it back:

We’re trying to do what’s right. And 2006/2008 did not happen because George W. Bush didn’t get impeached, is what I’m saying. I should be a little bit more tempered: I take back that remark about nuclear war.

Steyer is like a walking version of this meme: 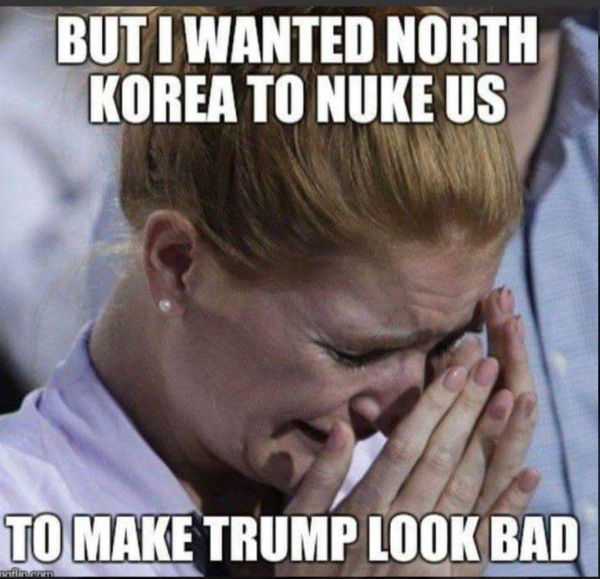 John Sexton of Hot Air made a great point about this:

Steyer isn’t saying he hopes for a nuclear war. He’s saying that normal politics, i.e. letting the electorate vote, shouldn’t be relied upon to get rid of Trump. He’s counseling impatience and using nuclear war as an offhand argument for the dangers of not being impatient enough.

But isn’t the way he’s saying this pretty significant? Part of Steyer’s whole pitch is that Trump doesn’t have the temperament to be president. He’s too dangerous and unstable to allow him to remain in office, i.e. he could start a war! But here’s Steyer using nuclear war as a debating point as if he’s a 14-year-old blogger.

If we had an honest media, a few Democrats might be asked if they agree with Steyer’s comments.

Stayer’s biggest problem is that Democrats are no longer a mainstream political party. The way they’re acting now is more like a child that can’t have his way, than a political movement that’s trying to win over voters.

If they’re this apoplectic after, perhaps, the worst candidate in history lost an election, just imagine what they’re going to be like after they lose the mid-terms.

Our biggest problem with the Steyers plural is that Tom has a brother, James, who he underwrites who has created the curriculum used in thousands of schools all over the country. It’s called Common Sense Media https://www.commonsense.org/education/digital-citizenship and James is pribably even more to the Left than Tom.

It’s one way Tom’s views get instilled in impressionable young minds and the role of Common Sense and its ties to Tom Steyer need to be better known.

It’s worse than that. There are many people like Steyer and they have boatloads of money.

Small Nuclear War Could Reverse Global Warming for Years
Even a regional nuclear war could spark “unprecedented” global cooling and reduce rainfall for years, according to U.S. government computer models.

After they lose the mid-terms we will see a return of movements such as The Weathermen. The kind of naked political oppression we have seen in places like Portland, Oakland and other bastions of radical leftists will become more common place. Of course it will be blamed on Trump because – TDS.

I respectfully disagree with using the word “progressive” as a label for this and any other leftist. It is their practice to reverse the meaning of words so as to deceive. He is progressive in the same sense that I “progress” toward the ground if I jump from an airplane without a parachute (Yes, this is a metaphor for how I would end up under “Progressive” rulers).

He is anti-American. He wants to be one of the global rulers where us serfs would be de facto slaves. The armed USA citizens are in his way because we do not have POTUS Hillary.

I agree with you, however the Progressive movement is not about “progress” per se. Rather about incrementally Progressing towards a Utopian vision of society. A Socialist society.
IIRC, they are a re-branded version of the Fabians.

This guy, just is George Soros, who are progressive billionaire lunatics projecting from their paid for soap box, their disbelief that Americans which elected President Trump for his tenacity and in part for being able to hold the SCOTUS appointments to constitutional judges as is the case now going into the mid-terms. What they strive for is a European Bloc which will include this side of the pond. The current threat to their “global position” of influence is the silent but deadlier progressive Jeffrey Bezos who already has infiltrated in China, Australia, Africa and South American countries.

He thinks of his particular brand of Trump Derangement Syndrome as an extension of the civil rights movement.

Why, are Democrats trying to block it via filibuster, like they did the last time?

Steyer has more money than sense.

So a guy who thinks a nuclear war is a reasonable stimulus for a national “course correction” thinks that he is fit to assess the temperament of someone to be President?

What is this thing called hubris of which you speak?

When dealing with extremely rich business people who venture into politics, it is always a good idea to take a long look at where their money comes from.

Steyer got rich as a HEDGE FUND manager, just like George Soros. These people attained their wealth by investing and leveraging OPM [oher people’s money’ in a global investment market. To make all of that money, the US trade economy has to remain exactly where it was when Trump was inaugurated.

Steyer may have liberal leanings, but this is all about the money, many trillions of investment dollars.

And how did Steyer’s hedge fund, Farallon Capital, make his investors and consequently himself filthy (and I use that word deliberately) rich? By investing heavily in coal mining.

That’s how “environmentalist” billionaire Tom Steyer can afford to bankroll the leftist agenda. He’s a rank hypocrite, but it’s increasingly clear that’s what it takes to be a leftist. He’s no different really than Weinstein, Clinton, or Schneiderman. They publicly champion women’s causes. They privately abuse women in ways up to and including rape.

And that’s OK with rank and file leftists. What’s a little virgin sacrifice, or in Steyer’s case a little rain forest sacrifice. Always remember that with leftists it’s never about what they publicly say they care about. They don’t care about those things. They only care about attaining power “by any means necessary.”

I should caveat my earlier comment by saying Steyer never put his fund’s money in domestic coal mining. It was always overseas. He knows perfectly well that China and other countries are never going to abandon cheap, abundant coal as a means of producing electricity.

Financially those investments were a smart move. I wouldn’t fault him for that if he was honest about it. But he can’t be honest because he’s really a con man. That’s why I despise him. While Steyer poses as an environmentalist and pretends to be in favor of international agreements on Climate Change he got rich by making sure that things like the Kyoto and Paris agreements can never work.

Which, of course, they never could. The whole climate change issue is just a racket. And Steyer, like Gore, is in on the scam. But because he made his lucre by investing in fossil fuel production overseas, and idiot leftists know as little about what happens overseas as they do about history or economics, he gets away with it.

Steyer, the Democrats, and the rest of the Left has as their primary goal the installation of a dictatorship run by them for their exclusive benefit. That has as a necessary step the destruction of our country and its Constitution. They have nothing but contempt for everyone outside their in-group. In the long run [which if they lose the midterms, and especially if they lose 2020 may not be that long] there will have to be a permanent accounting wherein the survivors will write the history. They have already chosen violence as their political tool, and it will eventually be reciprocated, especially as the rule of law collapses under their urging.

Steyer’s memory is more than a little bit faulty. I remember 2006, and I also remember the run-up to the Iraq war. At the time, there was a consensus among our politicians that war with Iraq was necessary, and the clips showing the remarks of people who had access to THE SAME INFORMATION as the White House (not just Cheney’s assessment of what the information meant) prove this. One of those people was John F’n Kerry.

I observed Tom Daschle et al., pivot and decide to ride the war in Iraq all the way to the White House, and I also observed how Tom Daschle was jerked out of his position by his constituents for this civic sin.

I also observed that, while the Washington Post was against the war from the get-gp, other media was not, until the Democrats changed their mind and started to undermine the war effort, so that we had talk about a quagmire before the tanks ever rolled.

Tom Steyer is a useful idiot who believes eery slander that the Democratic Party has spewed over the last ten years. I am sure this will be a source of dismay for the few remaining Democrats who have retained any sense of objectivity.

Trump is totally sane compared to this Nimrod.

This guy is one sick, dangerous bastard.

He’s going to get a lot of people killed.

Never … ever … put your faith into anything the ultra rich have to say.