You must be tolerant, but he doesn’t have to be. 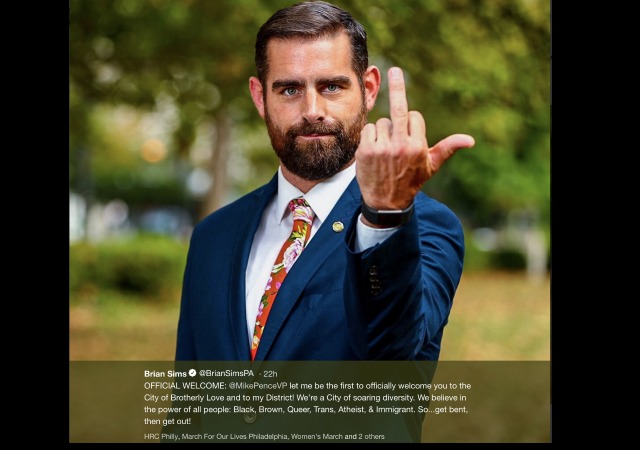 OFFICIAL WELCOME: @MikePenceVP let me be the first to officially welcome you to the City of Brotherly Love and to my District! We’re a City of soaring diversity. We believe in the power of all people: Black, Brown, Queer, Trans, Atheist, & Immigrant. So…get bent, then get out! pic.twitter.com/G9eLrXgeVn

Those posts have quite a few contradictions! City of Brotherly Love…except when you hold views that don’t agree with us. SOARING DIVERSITY….except we don’t like those with conservative views. Power of all people, we want you and we’ll respect you. WEIRD. I guess that doesn’t apply to white male Christians.

On Twitter, Nathan Wurtzel noticed that Sims tagged the anti-Semitic Women’s March. I guess they don’t want to include Jews either.

When you’re so “diverse” that you tell people to get out that aren’t your sort of diverse. https://t.co/Jw2OPNtQ4s

Are Christians included in your diversity?Dems act like immature children & make a fool of themselves when they’re confronted with people who disagree with them.What is it that your improving in your district that @realDonaldTrump & @VP are not already solving? #MAGA #StopTheHate

Sims responded to some people on Twitter by throwing the situation on the border in their faces. You know, how we’re literally ripping children from the arms of their mother and literally throwing them into literal concentration camps. I wonder when Sims will stop virtue signaling and head to the border to actually do something?

The middle finger doesn’t bother me. If you follow me on Twitter then you know I can use some very colorful language. It’s the hypocrisy of those who preach LOVE TRUMPS HATE, diversity, inclusiveness. As a former socialist leftist, I have to say I have found more tolerance and acceptance on the right and within libertarians than I ever experienced on the left.

Plus, last time I checked, gay marriage is still legal in America. My gay friends are not in a concentration camp despite the left making us think that would happen.

Just remember this, conservatives and libertarians. They preach tolerance and inclusiveness, but only if abide by their rules and share their views.

The City of Brotherly Love

This man is so self involved , he can not see the Forest for the Trees in Pennsylvania (PennsWoods)!
He touts Diversity and condemns someone different than himself. He is a Hypocite of the worst kind!

Ah yes, but Joe Wilson was a horrible deplorable for merely saying “You lie!”

Meh. This sorta shit is getting really, really boring.

What the hell is “soaring diversity”? Is it better than the more prosaic and quotidian type?

It must involve flying pigs.

That photo will haunt him forever. Righteously so.

A petty fascist with a middle finger: imagine if he had power over us.

Haunt him? He can proudly post 24×36 enlargements on his living room and office walls because all his friends and acquaintances will appreciate the gesture toward anyone of the current administration or, for that matter, anyone not a Democrat.

His base of imbeciles is small.
And even some imbecile finally get it.

He looks demented. The picture will be his undoing (if he was ever ‘done’ in the first place.)

notamemberofanyorganizedpolicital in reply to TheFineReport.com. | June 21, 2018 at 3:19 am

Only a moron would pose for that.

Power over us is his goal as it is with all sociopaths.

If this guy or anyone like him had true power over us, it would be like a Pol Pot regime.

It is more obnoxious than ever to see these people for what they are, disgusting public behavior, lacking in moral skills and human decency, while demanding it of others.

All for the cause of their justice, something they never learned the meaning of, but will instill on society by any means.

The Left’s message of tolerance is strictly for those who are not of the Left. We are supposed to be tolerant of bad behavior, criminal actions and deviance, while they are supposed to be intolerant towards all normal people in the realms of crime, deviance and whatever else strikes their fancy.

What should I conclude about the character of the people who support him? Don’t they say “His intolerance is one with mine?”

The left seems to be heavily populated by sociopaths who are mean and want to control the actions and thoughts of others. They are NOT hypocrites (ask them) because the ends (power over others) justifies the means. Sims is sick and dangerous. But, he does love the guy in the mirror. Others are to be controlled.

Classic “Progressive.” The are tolerant so long as you grovel to them and bend to their will. However, if you don’t give them unquestioning obedience, they are out to ruin your life if not kill you. Scum. Not for their beliefs but for the actions and their character. I hope his friends and family shun this meaningless little man, but suspect they are as mean and selfish as he.

A sociopath (bully) will attempt to control you, If you fail to submit, he will then attempt to destroy you. You only have 3 options: submit, leave (not always possible), or fight back fiercely. They interpret kindness or reasonableness as weakness. They love power over people. They follow a clear pattern.

Trump understands how to fight back whereas the GOPe submits.

Some sociopaths can be very charming…when they want to manipulate. If you fail to submit to the charm, get ready for the hate.

As is typical of the leftists these days, they are ruled by hate, despite claiming Love Trumps Hate. They truly live by the opposite, all day, every day.

I have experienced many times over that they are the most intolerant group of people that I have ever encountered, and when I point it out to them, they go into a usual diatribe about sexuality, abortion (Pro-Choice hahaha), racism on the right while doing all they can to segregate everyone with their labels. All I need to do is bring up one issue and their tolerance goes out the window, I end the conversation with yup, you certainly are tolerant.

Then they do the well, we can agree to disagree, which I then point out is nothing more than saying shut up because they don’t want to hear what is being said.

At some later point in time, I also remind them of that slippery slope we had talked about in prior times. Such as having been told the Gays only want freedom to visit their partner in the hospital, they aren’t looking for marriage. (That was from an actual conversation). I have told them they are like children, always pushing the boundary to the next line they say they have no intention of crossing, till they get to it.

They believe in God, but believe that they know God better than anyone, and that while God was wrong (their words) they believe it was because people weren’t ready for true tolerance.

Liberalism, as it is defined today, not the old meaning of the word which has zero to do with today’s left, is truly a mental disorder. They cannot accept the hypocrisy of their own convictions as being hypocrisy. We just don’t understand the nuances.

I guess in their view when Christ said “suffer the little children to come unto me, and forbid them not”, it is justification for abortion, they are just doing God’s work.

When I was a teenager we used to say that was showing “your age, IQ and number of legal parents.”

GayDar alarm on level 9. That boy owes himself a trip to San Francisco.

My answer to the caption would be: No, I prefer beards to be close cropped, 2-3 days old. A bit more off the neck as well. Oh and that erection on your middle finger needs to be put somewhere outta’ sight as well until the excitement Mr Pence causes you diminishes. Have some “pride” there dude.

The fascist left, with the curtain pulled back.

No wonder they hate the Second Amendment,and we treasure it so.

The city is a craphole. What’s he so proud of?

I wonder if this militant gay poses a threat to the VP. Secret Service do your job. Hope this f*ck waste doesn’t own a gun.;-)

Pajama Boy is just attention-whoring. Don’t pay him any mind.

What a drama queen.

He looks like he really wants to throw that right up his own ass.

A perfect picture of people working overtime to destroy the greatest democratic culture in the world, while proudly proclaiming their IQ number in fingers. Idiots working on becoming imbeciles.

I couldn’t help but notice that his list of “all people” left out the majority of Americans. But then, I suspect his notion of diverse and my notion of diverse are not the same. For that matter, I doubt we agree on just who qualifies to be American, much less what it means to be an American.

What an ugly and perverted POS!! He gives queers, gays & perverts a bad name!! I guess it takes all kinds. Pence is so far above him in dignity, morality and good manners that they don’t even belong in the same room!! I think if I ran into this rotten rep, I might be tempted to kick him in the groin….

He secretly dreams of Steve Carrel playing him in the movie of his life.

As for inclusion, I suggest the book “Stuff White People Like.” It is the most scathingly accurate assessment of Libtards ever written. FWIW, I am “the wrong kind of white person.” White people welcome people of different ethnicities, as long as they are opening a chic new bistro, … etc.

What a horrible, angry piece of trash he is.

Easiest advertising campaign ever, for the person who runs against him in the next election.

Really disgusting! One can only hope that his political career (at least on the national front!) is VERY short-lived!