The prime minister’s wife reportedly spent $100,000 of state funds on gourmet meals even though they had a cook. 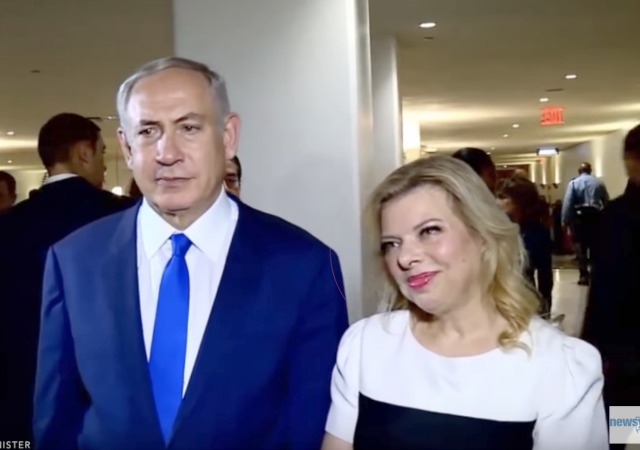 Netanyahu was accused of misusing about $100,000 of public funds for catering services at the prime minister’s Jerusalem home while falsely stating there were no cooks on staff, the justice ministry stated.

Prosecution alleged in the “Prepared Food Affair” that Netanyahu along with then-deputy director-general Ezra Seidoff claiming the Prime Minister’s residence did not have a cook although one was working at the home. She allegedly ordered that the cook’s employment be kept secret and “she was aware that ordering meals from the outside for the residence when it employed a cook was a violation of the rules,” Haaretz reported.

The indictment came after Netanyahu refused to pay for the outside meal’s values despite a number of attempts to reach an agreement.

The allegations also state that Netanyahu and Seidoff “hoped to obtain state funding both for the cook at the residence and for prepared food orders.” The Jerusalem Post continued:

Furthermore, in 15 instances, invoices to chefs who were brought in from outside were falsified in order to circumvent limits on how much could be paid toward outside-chefs. Seidoff directed the chefs, the house managers and Netanyahus’ secretaries to falsify the invoices in these 15 instances.

Charges against Netanyahu for these 15 instances were previously closed by Mandelblit as there was insufficient evidence to prove that she knew about Seidoff’s and the others’ actions.

Her husband “has called the allegations against his wife absurd and unfounded.” Netanyahu’s lawyer Yossi Cohen told The Jerusalem Post back “in January that Meni Naftali [former housekeeper] and other Prime Minister’s Residence managers like him, not Sara, are responsible for the food orders regarding which she is accused.”

Cohen further has said that number could be easily reduced to NIS 30,000-NIS 40,000, as many times when prepared food was ordered, the staff cook was sick, traveling or off for Shabbat.

Asked if he could prove this argument, Cohen said it is known that the cook was off work for these reasons, and that all he needs to do is raise doubt and force the state to prove that the cook was in fact working at the time. Since he said the state has no way to prove, for example, that the cook was working when around NIS 15,000 was charged for prepared food in January 2011, it cannot prove Netanyahu or anyone else improperly ordered prepared food.

Cohen said that if the charges only related to NIS 30,000-NIS 40,000 at most, they could be dropped as relating to an oversight or to a violation too small to be worth prosecuting.

Israel has its corruption problems but they also illustrate what it’s like living in a country with the rule of law and no double standard for elites: imagine Melania Trump or Michelle Obama being indicted for misusing taxpayer dollars https://t.co/e9ze5QNQJu

In first reaction to Sara Netanyahu indictment, @meretzparty MK Frej calls upon prime minister @netanyahu to quit, as Rabin did when his wife was caught keeping money in an illegal mannet

Translation: The spin of Sarah Netanyahu and her lawyers turned out to be groundless: not “air raids”, but fraud by hundreds of thousands of shekels on purpose.

Just finished reading the 19-page Sara Netanyahu indictment. A few thoughts. 1. If it took the State Prosecutors office & Attorney-General 3 years to indict on a relatively simple fraud case. It will take years for indictments in Netanyahu’s much more complex investigations. >>

2. The details are important but read them on @haaretzcom
The underlying picture of Sara, the mistress of a state-funded household being constantly informed she can’t have whatever she wants and still finding fraudulent ways of getting her way is by now sadly very familiar. >>

3. A name is missing from the indictment. That of the prime minister’s. Sara (&the senior official at the PM’s office who conspired with her) weren’t operating in a vacuum. There’s something simply obscene in hanging all this on Sara & not Bibi. She’s at fault, but he’s the PM >>

4. The details of the meals ordered at the PM’s residence, the payments for private chefs and waiters and the guests at those meals, are all backed up of course by documents. This case will stand or fall in court on whether or not Sara was aware she was commiting fraud >>

5. There’ll be no lack of witnesses saying they made it clear to Sara that what she was doing is illegal. Her testimony in open court will be a devastating ordeal. Some may relish that. I don’t think that with all we know about her issues, we should be crowing over her torment >>

6. For years there's been an atmosphere in the Netanyahu family and inner circle of sycophants that his leadership is absolutely essential to Israel. Netanyahu himself has called legitimate challenges to his leadership "coups". This has engendered a sense of total entitlement >>

7. Sara has said at various times that if Bibi wasn't PM he would be making billions in the private sector and that he is "sacrificing himself for Israel". In that atmosphere, what are a few meals, some champagne and cigars and pieces of jewelry? They're entitled to it all! >>

8. For all her many and well-documented faults Sara now deserves to have to face humiliation in court and quite likely a conviction for serious fraud (a plea bargain would make sense to save her the shame but she seems incapable of making the necessary acceptance of any guilt) >>

9. But Sara is not an elected politician or civil servant. The blame is Netanyahu's who as an elected leader fostered that sense of total entitlement around him. I have no doubt he deeply loves Sara but he is now throwing her to the wolves instead of taking responsibility. END

*This is a breaking story. I will update the post as more information comes out.

From this far area, both in time and in space, how can any of us know what actually did or did not happen?

However, it’s hard not to laugh while reading the complaint. Trying to bring down the PM’s wife by forcing an argument over who picks up the dinner tab? It reads like a bad joke featuring the worst anti-semitic stereotype you can think of.

Can you imagine all the Wed parties Mooochelle and Barrrrackk had at the WH on taxpayers dimes, how much that came out to?

All the what parties? And how could they be having any kind of private parties on the taxpayers’ dime? Are you somehow under the impression that we pay for the private expenses of the president and his family? The only perk the Trumps, and before them the 0bamas, get is free housing at the White House; we don’t charge them rent. They don’t get anything else, unless they’re at an official function, doing our business.

for the wugu beef alone

Oh come on, Milhouse, you know that taxpayers footed the bill for the Obamas’ extravagant parties they hid from the public. Here’s just one example: http://www.dailymail.co.uk/news/article-2084800/Inside-Obamas-secret-Alice-In-Wonderland-themed-Halloween-party-White-House.html

Do you really imagine the Obamas footed the bill for that? The security alone must have cost us a fortune.

White House security is of course a legitimate taxpayer expense, not something the president or his family privately needs or benefits from, so it’s not fair to complain about it as if it were some perk they get; and that’s just as true whether it’s the Trumps or the 0bamas. In any case it costs pretty much the same whether they’re having a party or not.

Most importantly, though, you didn’t answer my question. All the what parties? What on earth is a “Wed party”?

This reads as sour grapes for not getting the prime minister.

this is a very sad development.
Israeli politics always read like a libretto opera set in the 1700’s. The Lilliputians are tying Gulliver in knots.

Bibi is a genuine hero in defense of a State under continuous attack. The diversity of attacks and local politics is unusual in a small democracy. Someone needs to pay the outstanding cash and let Bibi keep his mind on protecting Israel (maybe a gofundme).

People will probably hate to hear this, but at some point, for the sake of the Nation at some point Bibi is probably going to need to lead what the South Americans call an “autogolpe”, or self-coup, to throw out the entrenched bureaucracy and do a wholesale reformation of their governing structure.

Sorry to disappoint you, but Netanyahu is no hero. He’s responsible for a lot of the mess Israel is in. He talks a tough game, but almost every time the pressure is on he caves. He started out as an opponent of the Oslo accord, but when Rabin’s assassination turned the polls against him he flipped and became a supporter. Almost his first act as prime minister was to give Hevron away to the PLO. He made a show of opposing the Gaza giveaway, but made sure to stay in the cabinet until it was too late to stop it. His government continues to suppress Jewish construction on unowned land in the “territories”, while allowing unchecked Arab construction, and to give legitimacy to the leftist judicial establishment. Overall if you look at his actions rather than his words it’s hard to find that much to admire. The sad thing is that there are so few realistic alternatives who are any better.

That’s a lot of money for Chinese food.

Yes, it’s petty, but if Michelle 0bama were caught with such a petty offense we’d all be demanding charges.