Only 11 millennials show up for “Auntie Maxine” Waters special event

Only 11 millennials show up for “Auntie Maxine” Waters special event 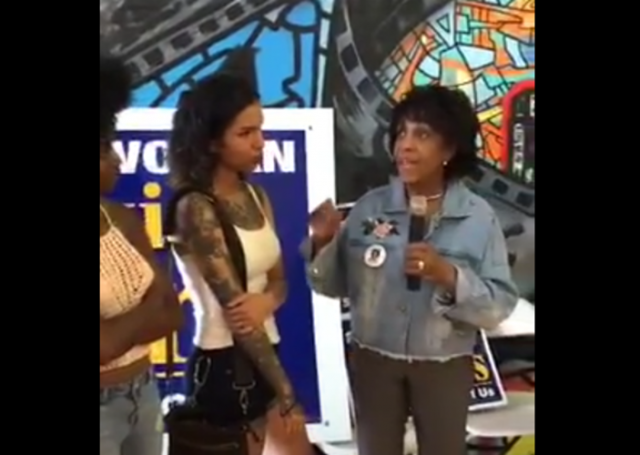 More evidence is streaming in that the anti-Trump Blue Wave may not be as big as predicted.

Today’s data point comes from the social media stream of “Mad” Maxine Waters, the quasi-lucid, vitriolic Congresswoman from California.  Last Sunday, she hosted an event targeted for millennials, which attracted a vast crowd of….11.

Young people have stayed away in droves from a tweet-a-thon with their ‘fearless champion Auntie Maxine’ in an embarrassing snub to the so-called ‘influencer’.

Maxine Waters, 79, organised a ‘Meet & Greet Tweet-a-thon’ in an attempt to show how popular, and in touch she is with millennials.

The event was billed as a ‘coming together to amplify congresswoman Walters’ voice and highlight her ‘many achievements throughout her career’.

Young people were asked to join ‘top social media influencers for a tweet-a-thon in support of Auntie Maxine… come energized and ready to get out the vote’.

But it was a lonely-looking Waters taking to the microphone at Sunday’s event, as a video posted on her Twitter account showed just 11 millennials in attendance. 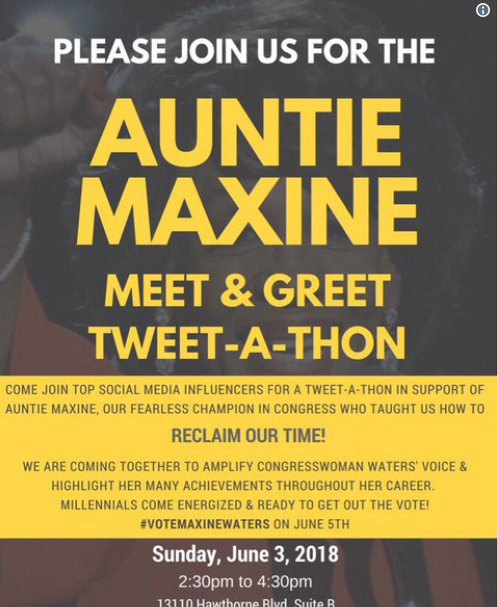 Waters used the event to gripe about the country and indulge her Trump Derangement Syndrome.

“When you come here you always have an open mic, you can say whatever you want to say,” Waters said.

Moments later, Waters took the microphone back to address the small group.

The camera showed empty tables, likely intended to be filled with fans of the liberal darling.

“We’re going to take back the House,” she predicted to the group.

She said pro-Trump forces “think they’re going to take me out.”

Undaunted, Waters went onto Twitter to thank all the millennials who attended.

Fewer people than at a Hillary Clinton rally?

Perhaps the millennials were too busy working to come to the “Tweet-a-thon”. Since President Trump took office, the unemployment rate for 20-24 Year Olds decreased from 8.2 To 6.8 percent, a staggering 17.1% drop.

If you enjoyed this update, then please savor some of the highlights of Auntie Maxine. I suspect we are going to be treated to much more drama through Trump’s two terms.

I’d say “quasi-lucid” is pushing it.

Is anyone opposing her in November?

She’s going to keep her seat. The ballots have already been counted.

This doesn’t mean much.

Millenials as a whole are the most lethargic bunch of doers I’ve ever seen. In other words, they will actually do when push comes to shove, they just lack the character and motivation to respond to positive stimuli (probably due to saturation)…most will only respond vigorously to negative stimuli (Trumpophobia).

Also, they are more than happy to proxy out their vote to anyone willing to commit fraud in their names…because they’ve just got so much stuff to do (on their phones).

Maybe her supporters vote for her so they can feel smarter than their congress critter? She gives Pelosi a run for least intelligent.

My vote(s), since I’m a Democrat, are for Hank Johnson (D-GA)

Speak truth, Maxine is most certainly representative of her flock.

What is really ignorant is society putting up with people like Maxine and her flock.

notamemberofanyorganizedpolicital in reply to Barry. | June 7, 2018 at 2:58 am

Don’t forget the flakes too – that makes Kalafornia just like a breakfast cereal.

So funny.
Mad Maxine plans to take back the House with 23 votes.

OMG. She’s gone completely noseblind to Narcissism. Could she be any more out of touch with normal people?

BTW, everyone here is invited to my place this weekend. Join in elevating my social media popularity and talk about how awesome I am!

I don’t get it. Her recent mental breakdowns should have closed all speculation about her competence. She belongs in a nursing home.

The local dog catcher could take her seat and do a better job representing her constiuents.

How old is that girl on the right? She looks interested in politics. Draft her!

Something doesn’t ad up. Is she a puppet candidate? Who is really running her office? And why are people in her district so afraid to run against her?

What if Maxine is the most competent person in her district?

That is likely, a demographic where they are all death, blind and dumb and so entitled.

Did you intend “deaf”?

Yes, deaf. It seems like a make many of these mistakes.

She is one of the most ignorant people in Congress. She lives in a mansion, is so crooked. She & Piglosi, should just check into the nearest ” Nursing Home.”

She is a complete waste of air space.

“Undaunted, Waters went onto Twitter to thank all the millennials who attended.”

Look at who did show: lost souls who literally mutilated themselves with tattoos.

I notice she does not abandon the microphone even though it is just a very small group.

Can’t we get Ms. Maxine some immediate medical attention? Surely, if she cannot afford her own medical/psychiatric care, we could initiate a crowd funding effort for her benefit.

Let’s translate this into “politician” numbers:
11 people showed up, factor in people who watched on twitter, carry the 2…
14,000 people were there to see Maxine!