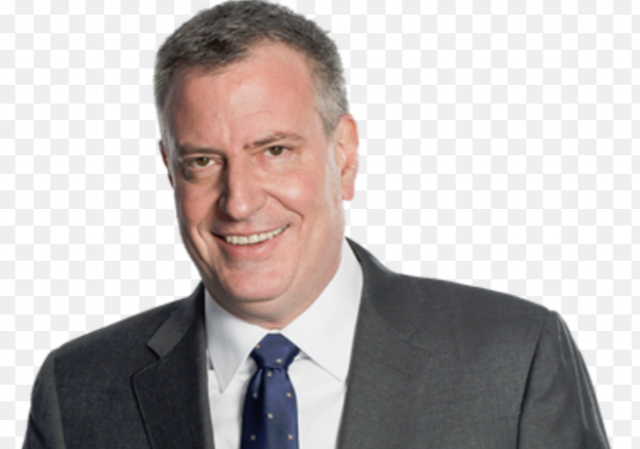 Nothing says, “I have my finger on the pulse of New Yorkers and their priorities” quite like NYC mayor Bill de Blasio’s “BREAKING” news tweet—yes, in all caps—that his nanny state meddling regarding the news his predecessor’s ban on styrofoam is back on.

BREAKING: New York City’s ban on styrofoam was just upheld by a judge and will move ahead! We will begin implementation immediately!

Hide your takeout containers and coffee cups — New York’s ban on styrofoam has been resurrected.

Judging by the excessive enthusiasm of its punctuation, the mayor’s office is excited [see above].

. . . .  The styrofoam ban was originally passed by the City Council and signed by Bloomberg in December 2013. The bill was set to take effect in January 2016, but a group of advocates who claim that polystyrene is recyclable — they even arranged a pilot program — succeeded in getting a judge to overturn it in September 2015.

To be fair, de Blasio is probably not that thrilled with the resurrection of Bloomberg’s styrofoam ban; he’s trying desperately to deflect attention from his SJW insistence that elite NYC schools become more “diversified” to reflect the diversity of New York City.

The problem: to fulfill this goal, NYC schools will have to discriminate against Asian-Americans to meet his race-based standards.

More bizarre priorities from toxic mayor who is throwing high-achieving Asian-American students under the bus in the name of diversity. https://t.co/5dEgPozclT https://t.co/soWjpFfLDJ

A new plan to change the way students are admitted to New York’s elite public high schools is infuriating members of some Asian communities who feel they will be pushed aside in the drive to admit more than a handful of black and Latino students.

But in a series of forceful statements on Tuesday, Richard A. Carranza, the schools chancellor, offered a blunt rebuttal to their claims. “I just don’t buy into the narrative that any one ethnic group owns admission to these schools,” he said on Fox 5 New York.

. . . .  The schools, which admit students based on a single test, look starkly different from the school system overall. While black and Hispanic students represent nearly 70 percent of public school students, they make up just 10 percent of students at the specialized high schools, a vast underrepresentation that has long been considered an injustice and a symbol of the city’s extreme school segregation.

Mayor Bill de Blasio offered a two-pronged plan on Saturday to address this, first by setting aside 20 percent of the seats at each of the specialized schools for students from high-poverty schools — which tend to have a high share of black and Hispanic students — who score just below the cutoff score.

But his administration’s ultimate goal, he said, is to eliminate the test entirely. In its place, top students would be chosen from every middle school in the city, a determination that would take into account their class rank and scores on statewide standardized tests. This move would require state action, because a state law dictates how specialized schools admit their students. The original law names just three schools, but the city has since created five more.

For the progressive left, it’s not enough to dumb down public education standards.  They want every school, public and private, to ignore academic ability and success in favor of “fair” treatment of minorities.  The problem is that “fair” in their worldview translates to completely unfair by any measure, including pedagogical and logic-based standards.

New York City has some famous selective high schools, such as Stuyvesant and the Bronx Science, that determine admission solely by scores on the Specialized High School Admissions Test. The result is a politically incorrect mix of students at these schools — not many blacks and Latinos, some whites, and lots and lots of Asian Americans — and this makes Mayor Bill de Blasio sad. He wants, in particular, more black and Latino kids at these schools, and of course this means fewer of the others, particularly Asian Americans. And so he wants to get rid of that darn test.

Now, no selection system is perfect, and one can certainly argue that in theory it would be good to take other factors into account besides a student’s score on just one test, grades being the most obvious example.

Rather than addressing the core issue of minority student preparedness, the progressive answer is always to level the playing field to the lowest common denominator.  Their reasoning is implicit: these racial minorities cannot possibly achieve success on their own; we have to enforce “a fair and even playing field” to make up for their overwhelming inadequacies.

As a result of this (implicitly racist) thinking, the progressive line is always:  Let’s not waste time and resources lifting up minorities in academic preparedness, let’s instead eliminate standards that require any standard of academic preparedness in favor of “racial equality.”

As noted by Pat Buchanan, this translates to:    “we must have more Hispanic and black students, and if that means throwing out the entrance exam to cut the numbers of Asians and whites, throw out the exam.”

The problem, of course, is that there is no “racial equality” involved; instead, this is a system of race-based admissions that negatively affects not only standards of education but other racial minorities (in this case, Asian-Americans).

No wonder de Blasio is trumpeting his styrofoam ban “win” instead of facing the barrage of criticism against his attempts to undermine Asian-American students in favor of his “preferred” races.

He’s an idiot on both issues. But NYC is a Democrat machine. I doubt they’ll lose unless they return to seventies era crime and decay.

I’m all for it as long as they racially balance all of the varsity sports teams, too.

What’s the racial proportion of his staff? I’m sure he’s eager to diversify competency and efficiency.

For starters, his security detail should ignore marksmanship scores and hire according to skin tone.

There is nothing like poor schools that makes people desert an area or city. If he puts 20% inner city dimwads in these schools, people will vote with their feet. My experience is that you can move ghetto dwellers out of the ghetto, but you cannot take the ghetto mentality out of them. They are damaged goods for life. I tried many times, all were ultimately failures.

We need to eliminate all forms of affirmative action, and solely judge people based on their performance.

“…judge people based on their performance.”
But that’s discriminatory! It only matters that they try their best. People voted in DeBlasio based on this very platform. /s off

Baltimore’s solution to make the city appear more liveable was to move inner city single moms out to the county where they could flourish. Of course, the drug dealer baby daddy also came along which completely defeated it, but hey, crime shifted is crime solved, right?

When I attended college at Emory, I lived in an off campus apartment and had a roommate from Asia. I actually can’t remember what country which is a little embarrassing. As a result, I was exposed a little to their cultural mindset. Their culture is radically different from ours and I frankly found it oppressive — and my roommate did too. From their family life to their reluctance to “think outside the box,” it was all distasteful to me.

I have a couple of Asian friends, their parents came here after Viet Nam fell, and while they are Americanized, they still have some unappealing cultural distinctions.

I would not for one moment, not one time, choose someone culturally Asian over an American for a job, I don’t give a damn “how smart they are.” Never.

Hooray for under achieving! Anytime I read a story like this all I can think about is Thomas Sowell and his story about his schooling growing up. He talks fondly of how his teachers pushed him and helped prepare him for the real world.

I recall a law school study where admitting lower scoring students into elite law schools only resulted in them failing law school and being stuck with a big debt for tuition. Such students attending lower-echelon law schools were much more likely to succeed in school, and thus get an opportunity to take the bar exam. I predict a similar pattern will emerge under de Blasio’s plan, but since we’re talking about black and latino students we cannot blame the students themselves for their failures. Blame will be shifted elsewhere, most likely onto “racism” by the white students.

Sounds like Bill Wilhelm/DeBlasio will ban himself, unless he finds a way to remove the gas holding his pellets together.

The Dumb-o-crats’ paternalistic and patronizing bigotry of low expectations is alive and well. According to this ethos, “minorities” cannot possibly be expected to survive in a merit-based environment in academia or in the private sector, and, thus, must be provided with a slew of heavy-handed supports from the State, in order to “level” the playing field.

My NYC 8th grade class was less than 60 kids. We grew up together all through grade school. Four of us went to Bronx Science. Two of us were white and two of us were black. We all did well. I do not remember any stupid or slow kids at Bronx Science. It was a tough school.

Allowing someone to sit down in a classroom in a school like that for any reason other than they have the aptitude to keep up and excel is a recipe for disaster. Skin color does not matter on mid-terms, finals, AP and the required New York State Regents Examinations.

There’s no reason to blame the kids – you can’t expect eighth graders (sixth graders for Hunter) to understand the problem with academic mismatch when all the adults around them are telling them to go to the best school they can. But the results will still be tragic.

That’s just like a liberal. Drag the elite schools down to average schools by forcing a school to accept kids with lower IQ’ regardless of their race! Elite schools should be just that,ELITE. His best option would be to make ALL of NY school better!