Possibly shot with their own weapons. 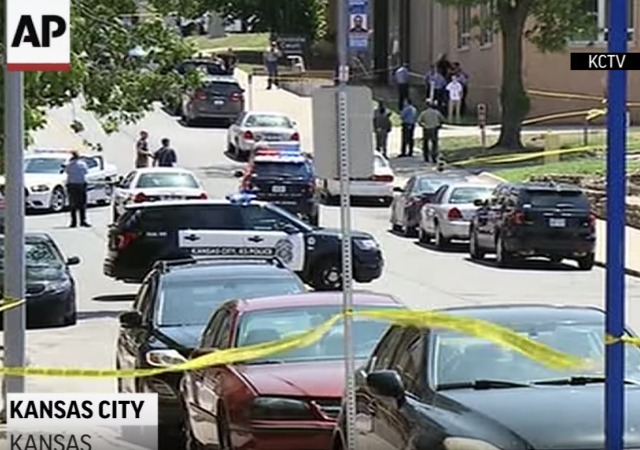 One Kansas sheriff deputy died and another is in critical condition after a shooting near a courthouse in Kansas City, KS. From CBS News:

One sheriff’s deputy has died and another is hospitalized after a shooting near the county courthouse in Kansas City, Kansas. Police say a male and female deputy from the Wyandotte County sheriff’s department were shot around 11:30 a.m. as they transported prisoners from the jail to the court services building.

Authorities say the deputies were overcome by an inmate while driving a transport vehicle. A sheriff’s department spokeswoman said the deputies may have been shot with their own weapons.

The male deputy died and the female deputy is currently in critical condition at the University of Kansas Hospital. Wyandotte County sheriff’s spokeswoman Maj. Kelli Bailiff says the suspect also was wounded in the shooting. He’s undergoing surgery.

No other details were released about the suspect, including his condition.

Still working to learn more about what happened this morning in downtown KCK, but clearly an already emotional scene. pic.twitter.com/54Owh66yKh

Really tough to see, but several deputies and staff are together in the shade on the Armstrong side of the courthouse building. pic.twitter.com/TjulVc1T3f

From one of the many “Policeman’s Prayers”: “Don’t let my last earthly thought be “I fucked up”.
I feel for the families involved, but prisoner transfers should not end like this.

Wanna bet the replacements for the Deputies both could be stunt doubles for ‘Mungo’ in Blazing Saddles?

What should have ended differently is the prisoner should have been left to bleed out instead of who know how much time and money spent on saving his worthless life. He was already on trial for 2 murders.

I saw on the news this morning that the second deputy has also died. RIP.

Yep, the guy was 35 and died at the scene and the lady was 44 and died sometime in the last 24 hours. The prisoner survived and when added together I think this will make his 3rd and 4th murders and he is 22.