“Authorities decided there was no other action they could take” 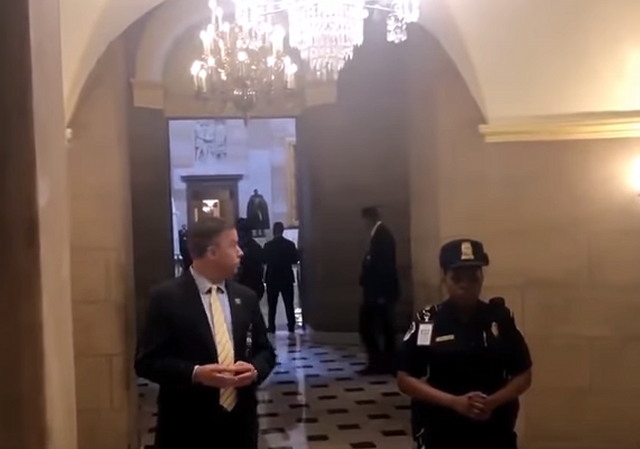 Last week as Trump arrived at the U.S. Capitol, a young woman screamed “Mr. President, f*** you!” That person has now been identified as an intern for New Hampshire Democrat Senator Maggie Hassan. The intern has been suspended but not fired.

Isn’t it fascinating how the people who keep telling us Trump is Hitler never seem to suffer any consequences for their behavior, no matter how outrageous it is?

Intern who cursed at Trump is identified, was suspended but not fired

The Congressional intern who hollered “Mr. President, f— you!” across the Capitol Rotunda last week during a presidential visit has been identified.

Sources tell Fox News the woman in question is 21-year-old Caitlin Marriott, who is interning in the office of Sen. Maggie Hassan, D-N.H.

Fox News is told she has not been terminated and will continue to work there through August.

Congressional authorities were finally able to identifiy Marriott and speak with her to determine if she posed a threat to the president, sources said. She raced from where she heckled Trump, forcing U.S. Capitol Police to put out a “be on the lookout” over their radios.

After deciding Marriott didn’t pose a threat to President Trump, authorities decided there was no other action they could take. However, Fox News was told that Marriott will be confined to her duties in Hassan’s office on the third floor of the Hart Senate office building and earned a week-long suspension.

Twitchy has collected some reactions to the suspension:

How the heck does this behavior NOT get you terminated as an intern?

Any intern who would shout that at any president should be fired.

She should be fired not suspended for a week.

She thought this was okay because of what she sees/reads/hears the left saying.. it’s sad.. really sad the lack of respect and integrity and appropriate behavior.. people have respectful disagreed for years. Nothing will get accomplished this way.. #bringbackcommonsense

@SenatorHassan Wow is all I can say for the disrespect. Can’t imagine the conversations in your office that made her feel like that was ok. You should be ashamed of her and let her go. She must be related.

Good way to ruin a career before it starts. Embarrassing

This is a good prediction:

Democrat intern who yelled “f*** you” at @POTUS won’t be fired.

The same “authorities” who “decided there was no other action they could take” would have fired ANYONE on the spot, if they did exactly the same to Barack Obama.

It’s a one way street always to the left. If you think there are any consequences for leftist bad behavior ask Bill Ayers how he’s doing.

She should find Bill Clinton, he would accommodate her.

She was not employed by ‘the authorities,’ so they had no no control over her employment status. From reading the article, however, it seems that they did have the ability to restrict her access within the building, and they did so.

Don’t these interns work at the pleasure of the office holder? They are not, to my knowledge, under contract or in a union, so they should be able to be let go for any purpose the official sees as cause. Just the optics (well, ok verbals) alone would have been enough cause had this been an intern working for a Republican.

The various yammering people, like Schumer and Pelosi and Waters, to name the usual loudmouths, would have been demanding she be let go. In such a case, I would say I would have agreed with them.

Big deal, suspended for a week and limited to working in the office, while putting a taint on that office. I guess it shows the left doesn’t care what they say or do to Trump and his administration.

I believe you are correct in your belief that the office holder’s discretion is all that is between the intern and the door.

I wonder if she is even a paid intern? Often these summer interns who work for Congress seat-holders are not paid. In that case, she literally loses NOTHING by being suspended for a week. It is like a vacation in the city for her!

This Congress critter needs to be publicly called out for not firing this intern.

Having worked in exactly this same capacity previously (albeit almost 20 years ago, with Charlie Norwood), I can assure you that the discretion of the office holder IS the only thing that matters (or, more appropriately, the Chief of Staff of the Office Holder, who actually makes the day-to-day employment decisions).

Whether she is paid or not is a function of how long she was scheduled to intern with the Senator from New Hampshire, the Hon. Maggie Hassan. If Ms. Caitlin Marriott is scheduled to be there longer than 6 weeks, she is likely to get a stipend of $250-$500 per week. I seem to remember being there for 8 weeks and getting a check for $2k after I returned home. I was able to pull it off due to generosity of a family friend who was the CFO of Gannett News Service at the time who let me stay at his house in McLean.

I was told in no uncertain terms: that access pass for you to be here working for us can be revoked at any time, for ANY reason, and we can send you packing.

Bill Clinton knew how to make an intern stop running her mouth.

There is a good chance that this intern was acting on behalf of the office holder.

This was right after Robert DeNiro said, “F*ck Trump!!” And of course she must have been fed this from MSNBC, CNN, and many of her college colleagues. Strzok and Page were saying this on their texts long before this. She has had many examples of why she thinks this is acceptable.

And of course, we have lovely Maxine Waters this week showing it is the NORM, not the exception, to believe uncivil behavior is not only ok but DESIRABLE, even rewarded.

Is she related to the Marriott family? I wonder if that is partly why she wasn’t fired. Someone above tweeted she “must be related” – but to whom? Big donors, or the Congress critter?

She has achieved her peak ability in life. As it were, who would have expected more of Senator Hassan’s office? Expect the least and be amply rewarded.

Odds are that the little missy is provided additional services, as required, for someone with more status than Comrade Hassan.

I’m not being sarcastic when I say she most likely improved her employability ten fold with her shout. She only erred in getting caught on a recording expressing what many in the elected class, the media, ans people who still can’t get over the election think and say off camera. The reduction to working in the office is window dressing. Perhaps the official’s way of keeping “deplorables” from asking about punishment.

She’s only repeating what she hears behind closed doors. Democrats have zero impulse control.

As I understand it, an intern position in government is a very rare, unpaid privilege handed to the best and brightest young person selcted from a congress critter’s district.

Read she was cheered as a hero while doing her walk of shame. Pyrrhic victory.

I suggest that the New Hampshire’s eventual Republican opponent hold on to this video for a campaign commercial.

That makes the assumption that the Republican candidate really wants to win. The GOP is not happy being in the majority, because they get called on not opposing the Democrats they like so much.

I have just reached out to the senator from New Hampshire regarding the suspension of her intern. This person should be fired, not terminated. I encourage all here to do the same , you can go to her website and leave a comment.

Done. And remember, be polite in doing so. The goal here isn’t to be rude in return, it’s to administer a needed corrective to both the senator and the intern.

I heard this stanky little hippie chick intern has very hairy pits & legs. Wonder what her compensation package is. I imagine her parent(s) are so proud 🙂

Every RED state Democrat who is up for re-election for the US Senate should be asked about this and what they would recommend.

I’ve said it before, I’ll say it again. When your main argument is FU, you are losing. It’s all they have left. Pathetic.

Either FU or “racist!”

Assuming she was fired, her Marxist poli sci professor would probably still give her an A.

Look at it this way, if she was fired chances are CNN would have hired her on the spot.

The Left has such an expressive way with words. With well over a millions words in the English language, they function on so few.

“Authorities” means that the Senator employing her had no problem with it, doesn’t it?

Nevermind. I’ve read the Senator’s statement. The Senator has issued a slap on the wrist and deems the staffer far more deserving of further employment than the elected President of the United States. This upholds the high standards of the Senator’s office.

So that’s how it is.

Maggie Hassan needs to suffer the consequences for her intern’s lack of decorum. Not because she caused it, but because she refused to correct the error.

So she gets a week to work on her tan out on the Maryland shoreline. Wow.

Perhaps a week of community service at the Asseteague National Mosquito Refuge. She could intern for the real professional blood suckers.