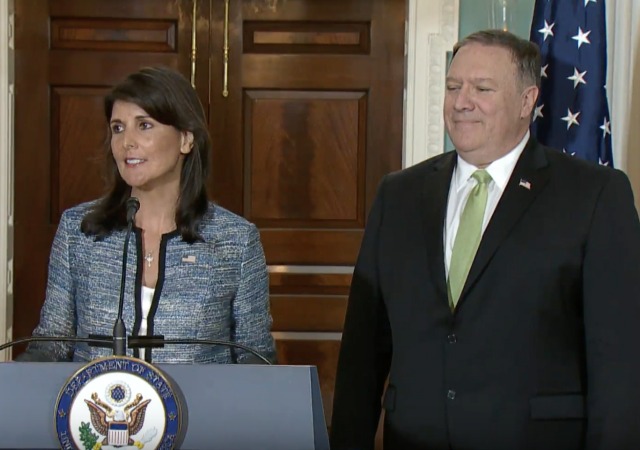 Extraordinary letter from @nikkihaley to @hrw in which she seeks to hold us and other human rights groups responsible for the US withdrawal from the UN human rights council pic.twitter.com/V77IMSGHHb

The letter placed blame for the withdrawal of the United States from the United Nations Human Rights Council (UNHCR) on 18 NGOs, including HRW, for stymieing U.S.-led efforts to reform the corrupt institution.

“It is unfortunate that your letter sought to undermine our attempts to improve the Human Rights Council,” Haley wrote. “You put yourself on the side of Russia and China, and opposite the United States, on a key human rights issue.”

Levine’s post went up a little after 6 on Wednesday evening. Throughout the day there were a number of news articles — including at Politico, Bloomberg, and The New York Times — all with the same spin: Haley blamed the NGOs.

What’s clear from the Times article is that Haley charges were accurate. HRW and the other NGOs did oppose the U.S. initiative. I also suspect that it was HRW that released the letter to the news organizations. In other words, if HRW hadn’t protested, we would never have known about the rebuke. But HRW must have understood how damning Haley’s charges were and wanted to get it out (before it leaked) so it could control the spin.

The Times of course helped by titling the piece, “Haley Blames Watchdog Groups for U.S. Withdrawal From U.N. Rights Council.” But the real story is: Human Rights Groups Admit to Blocking U.S. Efforts at U.N. Reform.

Haley wrote that the U.S. effort at  reform was focused on two things: 1) the vetting of states to join the council and 2) ending the council’s anti-Israel bias. The second item is a reference the UNHRC’s Agenda Item 7, which singles out Israel, the only state in the world so targeted.

The Tower noted that “The New York Times report appears to confirm the particulars of Haley’s charges.”

Haley wrote that while the U.S. had requested responses to its resolution for reforming the council, HRW and other human rights NGOs wrote a letter requesting “that Member States oppose our resolution and not engage on the text.” In other words, HRW wasn’t just disagreeing with the U.S., it was shutting down the U.S. efforts.

The Times, in fact, reported, “Human Rights Watch was among the nongovernmental organizations that opposed Ms. Haley’s push for a General Assembly vote.”

While Louis Charbonneau, HRW’s United Nations director, told the Times, that it was “outrageous and ridiculous” to suggest that HRW or its fellow NGOs were working against reform, nothing in the Times report suggests that Haley’s charges were wrong. Nor did Charbonneau deny that HRW asked other state to oppose the U.S. resolution and not even address it.

Charbooneau said that the problem with the U.S. proposal was that it would “it would have opened a Pandora’s box of even worse problems.” The Times explained that HRW and other NGOs feared that it would lead to Russia  and China proposing changes that would further weaken the council.

But that makes no sense. In 2006, when the council was created to succeed the U.N. Commission on Human Rights, Ken Roth, the executive director of HRW said, “Under this new system countries with poor human rights records like Saudi Arabia will never have a seat on the council again.” But the council does have numerous countries with abysmal human rights records, and that was one of the things the U.S. wanted to change. If HRW is fighting the U.S. on something its own leader said was important, the opposition to the American proposals is cynical not principled.

HRW is trying desperately to spin the news, and is getting help from media outlets, but the truth is that Haley criticized them fairly, and they don’t like (or expect) to be criticized.

antisemitism has been an acceptable prejudice for centuries. these days it’s been mainstreamed.

It was almost ironic that someone named Levine would be the HRW blusterer. But we know there are some numbers of self-hating Jews, perhaps mostly in the US.

It’s been mainstreamed rather recently:

INTRODUCTION TO THE HOLOCAUST:
https://www.ushmm.org/wlc/en/article.php?ModuleId=10005143

HRW was broke and Soros stepped in and is financing the whole sorry operation. Soros orders and they obey. They haven’t been a human rights organization for many years. Good for Haley. HRW should have worked for reform instead they can now make their presentations to the paragons of human rights, Russia, China and a bunch of third world dictatorships. Ken Roth must be very proud.

Nikki Haley is simply the best UN rep we’ve had in my lifetime. She’s fierce and feminine. Duty, honesty and integrity. All the traits we look for in our professional-careerist diplomtoc corps, but generally find lacking.

How about massively corrupt:

After thirty years in the biz, Nuland started her own shiny new 501c3 charity non-profit. Because thats how the courtier-grifter class cheat on taxes and work grifts and collect bribes.

For a better world. For a better tomorrow. For the children. A dream is a terrible thing to waste.

I suspect, without evidence, that John Bolton would have been as effective if he had the right administration to work for (and if he had been confirmed??). But both Bolton and Haley are the best US UN Reps in my seven decades on the planet.

Haley is the right person at the right time. Energetic. Media can’t trash her for being male and white. She’s matched to all the right circumstances.

Nothing wrong with Bolton. But shoulda-coulda if-only’s just isn’t a tangible result.

This sort of whining is how you get more Nikki Haley. She steps in. She kicks butt. She takes names. She suffers no fools. You go girl!

NGOs are symptomatic of a general trend among the intelligentsia: that they have a right to change the world outside of popular consent.

You can see this in the sheer arrogance of university departments “of social transformation,” as if anybody else agreed to give them that power.

Oh, and it’s not a coincidence that NGOs also provide employment to a gaggle of social parasites who couldn’t find a useful job elsewhere.

This 20 second video of Obama is quite enlightening.

Obama Can Tell You Who Should Rule
http://classicalvalues.com/2018/06/who-shall-rule/

It is all about power and wealth. George Soros is a perfect example. He attained significant power by amassing significant wealth. So, what does a man go after if he has that level of wealth and power? Everything else in the world. Being the big shark, he is surrounded by smaller fish all trying to grab this scrap and that. They all swim together. And, except for a very few minor lunatics who actually want to destroy everything, most of these people want to destroy the world to rebuild it in their image, with themselves in total control. These people are not crazy, they are completely sane. And extremely dangerous. Whatever you, and the rest of the world have, they want. And, they are going to get it, if at all possible.

Haley calls a spade a spade 🙂

Red, you have nothing to worry about. They try to mainstream Joooo hatred. It doesn’t work. I’m a Christian, which means I’m a Jew with a twist. I believe the Messiah promised in the Tanakh has come. Jews don’t believe this. When ww finish this race we’ll find out who is right. And I’ve amicably debated rabbis who agree; if Jesus returns, then they’ll believe in Him.

Masada will not fall again. You have the word of a spokesman of the word wide conspiracy that took it the first and only time.

I’m a Christian, which means I’m a Jew with a twist. I believe the Messiah promised in the Tanakh has come.

No, you do not. If you did you would not pray to him, or consider him a god. The annointed king promised by the prophets will be exactly that; an ordinary human who will restore his ancestor David’s kingdom, rebuild the temple, bring all the Jews back home, reign in peace and justice, and then die like everyone else and be succeeded by his son. You don’t believe your god was that person, or that such a person will ever come.

“26The poor will eat and be satisfied; those who seek the LORD will praise Him. May your hearts live forever! 27All the ends of the earth will remember and turn to the LORD. All the families of the nations will bow down before Him. 28For dominion belongs to the LORD and He rules over the nations.…”

One thing the Jews will have to overcome. If we are getting it wrong when the Tanakh commands Israel to be a priestly nation? A light to the world? This is a common objection, from Ghana to Cambodia. If the Christians were wrong, were they wrong when the gave us the Tanakh? And where the h3ll were you? Weren’t you supposed to teach us about Yahweh?
=

We teach by example.

There are only three possibilities.

1) We Christians are right.