“This is wrong. This is just wrong.” 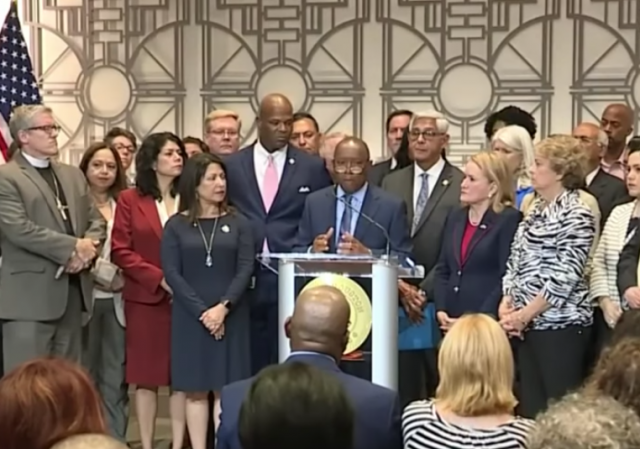 Houston’s Mayor Sylvester Turner held a press conference with local community leaders Monday to push back against plans to use a former warehouse located just outside of downtown Houston as an immigrant child holding facility.

Turner, “said he is in no rush to issue city permits at the site, and called on the state not to issue a childcare license to the 54,000-square-foot facility,” reports the Houston Chronicle.

More from the Houston Chronicle:

Turner, flanked by numerous nonprofit, religious and political leaders, said he wanted to show a unified front to protest the “unjust and immoral policy” the Trump administration began enforcing in April, when a “zero tolerance” approach began driving up the number of children removed from their parents upon crossing the border illegally.

Minors cannot be held in prison and are transferred to the federal Office of Refugee Resettlement, but the government is running out of space to hold them, as more than 2,000 children have been separated from their families since April.

…Southwest Key Programs, a Texas nonprofit with a lucrative contract to detain so-called unaccompanied minors, confirmed last week that it leased the former warehouse at 419 Emancipation Ave. and is seeking to hold 240 children between the ages of “0 to 17” there.

Stakeholders who work with immigrant minors said they have been told the facility would largely serve “tender age” children who are younger than 12, as well as pregnant and nursing teenagers.

Turner said he respects the work Southwest Key has done in the past, noting that he worked with the group’s leaders during his time in the Texas Legislature, but the mayor said these circumstances are objectionable and proclaimed he will not “be an enabler” in this process.

“I’ve done my best to try to stay clear of the national dialogue on many issues. I’ve done my best to try to focus on the issues that confront the city of Houston, recognizing that we need the partnership of the national — the feds — the state, working with the city,” Turner said. “This one is different. There comes a time when Americans, when Houstonians, when Texans have to say to those higher than ourselves: This is wrong. This is just wrong.”

Not in his back yard!

Cloward–Piven strategy. Overwhelm the existing system to force it into breakdown. No one seems to be asking why we suddenly have so many children that existing facilities are insufficient.

The whole thing is a disgusting theater, using children for stage props. Nobody wants to talk about how THAT is exploiting children, too.