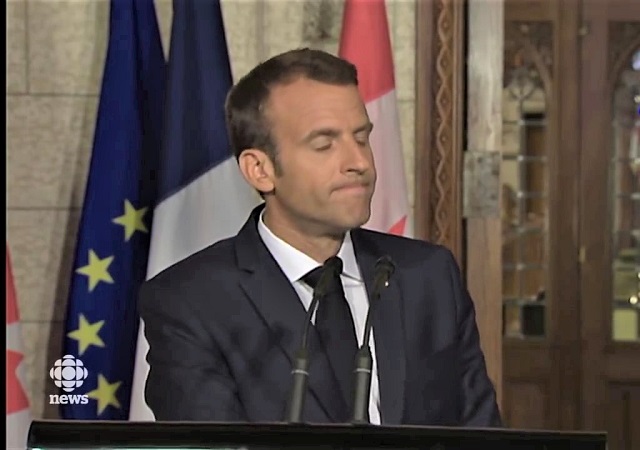 A war of wards has broken out between France and Italy after French President Emmanuel Macron threatened sanctions against EU member state refusing to accept migrants.

“I am in favor of sanctions being imposed in the event of no cooperation” on migrant relocation, said President Macron.

Italy provoked the ire of the EU establishment after it closed its ports to several German migrant ‘rescue’ boats carrying asylum seekers picked up near the coast of Libya. However, President Macron’s threats are not limited to Italy alone. France and Germany are backing an EU plan to “relocate” hundreds and thousands of asylum seekers across the bloc. Most eastern European countries are bitterly opposed to the scheme.

The tensions are mounting at a time when the EU leaders are gathering in Brussels on Sunday for the so-called ‘EU mini summit’ to discuss immigration.

French President Emmanuel Macron came out Saturday in support of financial sanctions against EU countries which refuse to accept migrants.

“We can not have countries that benefit hugely from EU solidarity and claim national self-interest when it comes to the issue of migrants,” he said at a press conference in Paris alongside Spain’s new Prime Minister Pedro Sanchez.

“I am in favour of sanctions being imposed in the event of no cooperation,” he said.

The prime ministers of Poland, Hungary, the Czech Republic and Slovakia have decided to skip the Sunday’s EU summit on immigration, Radio Poland confirmed. This is a bad news for Germany’s Angela Merkel who had called the summit in a last ditch move to save her fragile coalition government. Her Catholic conservative Bavarian ally, the CSU, has threatened to quit the government if she fails to deliver on immigration.

“Foreign NGO boats will never touch Italian soil again,” Italy’s Interior Minister Matteo Salvini wrote on Facebook. “They will only see Italy on a postcard,” he said, referring to illegal immigrants aboard the German boat.

Macron’s threats are not without substance. The European Commission, EU’s executive arms, is currently pursuing infringement proceedings against Czech Republic, Poland and Hungary. The process could lead to fines and economic sanction on Prague, Warsaw and Budapest.

The only reason France’s Macron, the unaccompanied minor of the European politics, has the center stage to himself is because Merkel is too busy quelling rebellion at home. His threats to Italy and eastern European countries lack teeth. The EU would be shooting itself in the foot if it were to place economic sanctions on its members state amid an ongoing trade conflict with the United States. Neither can Brussels risk opening an ‘Eastern Front’ in the final round of the Brexit negotiations.

Would this be a good time for President Trump to offer Poland, Hungary, and the Czech Republic a free trade agreement?

A war of wards has broken out between France and Italy after French President Emmanuel Macron threatened sanctions against EU member state refusing to accept migrants.

If I said I thought they should threaten sanctions against EU member states for ACCEPTING migrants; would that make me racist and bigoted and islamophobic and uncaring?

And if it does…I really don’t care. Do U?

Good for Italy! Calling France ‘arrogant’ is a step in the direction of bringing down the entire EU house of cards.

Even if it is much like calling Water “Wet”, and Fire “Hot”.

I guess Macron feels that the number of his countrymen killed in the past decade by those “migrants” and their camp followers is insignificant and not of any consequence.

Glad he’s not my President.

Gaddafi is sentenced to summary sodomy and abortion. In the interests of weapons smuggling, catastrophic anthropogenic immigration reform (e.g. separation of children and parents, trail of tears) is forced. France gets the oil. Italy gets immigration reform.

It wasn’t the EU that decided to import millions of Muslim barbarians. It was Germany.

The leaders of these countries have pointed it out in internationally available news stories, but… since the EU has visa-free travel within its territory, would there be any point? If they want to go to Germany, even if they are relocated to Poland, they can easily go to Germany afterward. So, aside from granting Merkel and Macron political cover, is there any point… or is that motivation quite sufficient?

Italy has figured out the scam: that is to say, they’ve known about the scam for a long time but now officially recognize it.

The scam is this: various NGOs hire ships with dubious registries. They park the ships just off the coast of Libya. The human smugglers round up the gullible dupes from around Africa and the Middle East and take their money. They shove the refugees on rafts headed to “Europe”. But just a hundred yards past the twelve mile limit why shazam! It’s a rescue ship! We’re saved!

And the rescue ship knew just where to be, most every time these days. It’s almost as if the NGOs and the smugglers are talking to each other.

My hypothesis is that a forensic audit of these NGOs would turn up quite the interesting money trail.

The new government in Italy, being modestly more conservative, is not willing to play ball with the NGOs. That’s the current “crisis”. That Mr. Macron defends the “poor refugees”, and by extension the NGOs with their connections, says a lot about where France is in all this.

Another point in the scam: Chancellor Merkel has said previously that one reason to take in the refugees was to keep them from drowning in the Med.

Basic economics: the gullible refugees are pay about $6,000 to be shoved onto a raft in Libya.

But a plane ticket from Benghazi to Templehof in Berlin is about $400.

If Chancellor Merkel were truly interested in saving refugee lives, she’d simply fly them in.

Amazing how certain people bent on committing suicide are compelled to take others with them.

Right, hollywood and the democrat party?

Italy is in a desperate financial hole. If Germany passes a few regulations about German banks buying Italian government bonds, Italy’s government may collapse—not for the first time, and probably not for the last, either. Then France and Germany will have a new Italian government to deal with, perhaps one more amenable to “reason”.

The financial screws are probably the reason for Spain’s otherwise inexplicable acceptance of a couple of boatloads of African trouble. Spain’s economy is in almost as deep a hole as Italy’s.