“swamped his leftist rival in the country’s second-round election” 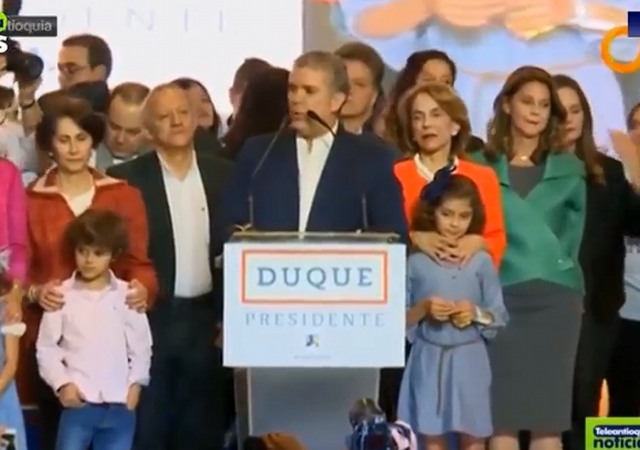 The nation of Colombia just elected conservative candidate Ivan Duque as its new president. We always try to be careful with terms like conservative and liberal when it comes to world news because they have very different meanings in other countries. However, most media outlets are describing Duque as right wing.

Iván Duque, a conservative former lawmaker, will be sworn in as Colombia’s next president after he swamped his leftist rival in the country’s second-round election on Sunday.

Colombia’s election authority said Duque — at 41 years old, the country’s youngest president-elect for more than a century — had won 54 percent of the popular vote, leading former Bogotá Mayor Gustavo Petro by more than 2 million votes, with nearly all votes counted.

“A new generation has arrived to govern Colombia with the largest vote in the country’s history,” Duque said in a victory speech at his Democratic Center party’s headquarters in Bogotá.

Iván Duque, a populist conservative, won Colombia’s presidential election Sunday with about 54% of the vote. He defeated former guerrilla member and past Bogotá mayor Gustavo Petro with a platform focused on economic revival and reform of the country’s recent rebel peace deal.

Duque, 41, will become one of the youngest presidents in the country’s history. A newcomer to politics, Duque worked at the Inter-American Development Bank in Washington before being elected to Colombia’s senate in 2014. His political rise is thanks much in part to former Colombian President Álvaro Uribe, who mentored Duque.

Many fear Duque will be a puppet of Uribe, a politician known for his strength and harsh tactics against guerrilla rebels. Uribe was president for two terms from 2002 to 2010, but is constitutionally barred from running for a third term. Uribe is also known as an adamant critic of the country’s 2016 peace deal with the Revolutionary Armed Forces of Colombia (FARC), and Duque has carried this criticism into his own platform.

What motivated Colombian voters to elect a conservative? Monica Showalter of American Thinker suggests they didn’t want to turn into their neighbor Venezuela:

Buried news: Colombia’s poor rejected socialism, big time, out of a credible fear of ‘another Venezuela’

Sunday’s election of a hardcore conservative in Colombia has left the media elites and their pundits befuddled.

Some are calling Ivan Duque, the 41-year-old new conservative president-elect a “populist” as if to suggest that both President Trump and the late unlamented Venezuelan strongman, Hugo Chávez, are all dreadful peas in the same pod. Others are speculating that Colombia elected another Emmanuel Macron, as if France’s youthful, namby-pamby president amounted to a comparable sea change to what this election represents…

Now the clarity comes. Poor people voted for a genuine conservative out of terror of becoming another Venezuela, because they know what it is up close. And yes, those are the vaunted poor who for years we have been hearing are so poor that they can vote only for candidates who offer to shovel the most pork. They didn’t. And it wasn’t even close. Duque won against his opponent, socialist ex-guerrilla and former Hugo Chávez admirer Gustavo Petro, by a margin of about 54-42, according to the New York Times.

At least some people get it. The leftists wave through the world is showing signs of breaking up due to massive failures. There is a long way to go, and unfortunately, the left has been great at labeling politicians as right wing as if that is a curse, while it seems even far leftist views are deemed moderate and unworthy of the labels.

We certainly live in interesting times.

I find it almost amusing that, prior to the election, whenever our leftist press talked about this race, they would say “oh its so close, the leftist is probably going to win!!!”

And then it turns out to be a landslide win for the right, so of course our press will work as hard as they can to say nothing about it at all. Until they come up with some spin on how Evil and Horrible this election was.

From an American perspective, right-wing is libertarian.

The center is conservative. #PrinciplesMatter

The left is monotonic or divergent, with an eye to monopoly formation.

hope he lives to make it to office…

Scary that 42% of Columbians could vote for a Chavista even with Venezuela literally dying next door and egesting ongoing rivers of its half-dead human effluent into their country. We seem to have a similar percentage here in America who, seeing how the Obama FBI tried to turn the FBI into the KGB and the U.S. into the U.S.S.R. are obsessed with pursuing any and every last hope for overthrowing American democracy.