Who done it? Huge explosions at Iranian missile depot in Hama, Syria – but no one being blamed

Who done it? Huge explosions at Iranian missile depot in Hama, Syria – but no one being blamed

Housed missiles for advanced Iranian air defense system – yet Syria hasn’t blamed anyone and has barely acknowledged the explosions. 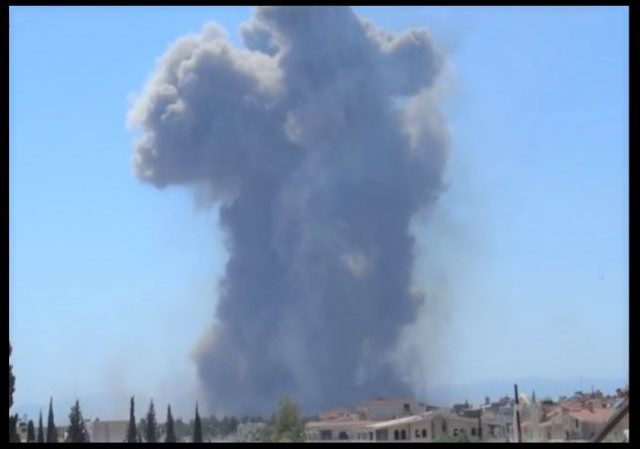 Israel repeatedly has bombed Iranian missile and weapons depots in Syria, along with other Iranian assets. In most of the cases Syria is quick to blame Israel, and Israel is silent.

When Iranian Revolutionary Guard fighters fired dozens of rockets at Israel recently, Israel wiped out 50 or so Iranian targets and was public in claiming credit.

A couple of days ago there was a massive series of explosions at a Syrian military airport serving as a weapons storage facility for Iranian missiles. The video is as dramatic as we have seen, with enormous plumes of smoke rising high in the sky:

Syria did not blame Israel and has not come up with an explanation, though there have been suggestions it was an accident caused by high heat. Reuters reported:

Explosions were heard in and around Syria’s Hama airport on Friday, Syrian state media said, without elaborating on the cause of the blasts, and a monitoring body said 11 pro-government troops were killed.

The Syrian Observatory for Human Rights, a Britain-based war monitor, said the series of explosions happened inside Hama’s military airport and had been heard in Hama city. Eleven people had died and dozens were missing from among Syrian government and allied forces.

The war monitor said it wasn’t clear whether the blasts had been caused by technical failure inside the depots or an attack. Thick plumes of smoke could be seen above the airport, it said.

It’s suspicious because, as Sky News Arabia (via Times of Israel) reported, the depot stored the missiles for an advanced Iranian anti-aircraft system modeled on the Russian S-300 platform:

The Sky News Arabia outlet reported that the explosions were caused by an attack on an advanced Iranian air defense system.

However, Syrian military sources told the Lebanese el-Nashra TV station that the blasts were caused by a “technical malfunction” at a weapons storage depot.

There were no immediate comments by Syrian officials on who or what was behind the explosions.

The blasts came soon after midday, as the region is experiencing a scorching heat wave. Almost all previous Israeli airstrikes on targets in Syria have been late at night or in the pre-dawn hours.

According to Sky News, the target of the strike was an Iranian Bavar 373 long-range missile defense system, a state-of-the-art model that was unveiled in 2016 and put into service in March 2017. Iranian officials compare the system to the Russian-made S-300 system, which is considered a powerful air defense platform.

A previously unknown group is claiming they infiltrated the base, though that cannot be verified:

Saraya al-Jihad takes responsibility for the massive explosion at the #Hama airbase in #Syria. The group distributed pictures taken from within the airbase. They claim their men infiltrated the base and carried out the attack. pic.twitter.com/ACq4or1zxJ

So who done it?

It’s a mystery. Whoever it is, Syria and Iran don’t seem anxious to point the finger or even to acknowledge another Iranian loss in Syria.

Want me to guess?

I think Israeli intelligence managed to sabotage the facility, and the Syrians and Iranians know it.

No doubt they have State Farm Insurance?

They had Mutual of Gaza…

Was this Iranian incompetence or Israeli competence?

It’s a funny thing how are things in that region are starting to swing pro America and also pro Israel now that Obama is out of office. Total coincidence of course, there couldn’t possibly be any relation between thise events.

beagleEar do you not realize that Obamas foreign policy initatives take a few years to kick in. Trump is just a bully and everyone is afraid that he will drop the Bomb on them (sarc.) MAGA

Israel targeted an innocent fireworks factory!! Harmless and blameless Hamas freedom-fighters and their wives and children were killed in the vicious and unprovoked attack. Some of the deceased later spoke on camera, explaining how they became victim’s of Israel’s incessant warmongering.

Iran vowed to never give up trying to provide Syria with high-quality fireworks. The common people praised Iran’s kindness and resolve.

I only have a few aguments with Isreal. This is not one.

Right now is a tough time to be Iran. Good.

I had nothing to do with it.

I didn’t want to say anything. But now that you asked…

Well, dammit to hell, you beat me to it! Very well then, I am Spartacus!

Damnit Fine. You were to hang in low orbit until the After Action report was done! I’m gonna have to ask you to turn in that Mark VI Suit and return to the compound. You’re grounded. And no flirting with Scarlett Witch or Widow – you remember what happened last time?

Hell, blame it on me. Even if I didn’t do, I would have if I could have.

Or it could be the GCC of Thomas Wictor. I hope his theory is correct.

He has many threads on them

Thomas Wictor is really good at connecting dots. The one thing I wonder is- is he correctly connecting them? His theories are, to say the least, not mainstream thought. Also not unbelievable.

Every now and then, somebody moves in and takes out a bunch of Iran’s bloody toys, and there is an echoing silence throughout the entire Muslims world.

LOL, of course it was. It’s always a technical malfunction when you discover that you have no way to protect yourself from the evil American/Israeli forces.

There is no way to know exactly what happened to this facility, at this time. Something caused stored munitions, thought to be artillery missiles, to detonate. It could have been high temperatures, human accident or sabotage. We may never know exactly what occurred, other than there was a detonation.

One thing we can reliably assume is that there is some reason why Syria and Iran would rather claim this was the result of some “technical failure” rather than the result of action by a foreign power or internal enemy. Anyway, less Iranian missiles is always a good thing.

I’m not saying it’s an accident or on purpose. Either way would not surprise me. Watching this endless conflict heat up and unfold for the last seventeen years has convinced me that most of the actors in the MENA world are incompetent boobs at best and dangerous fools the rest of the time.

No wonder the IDF has had few real setbacks. God has seen fit to make their enemies weak, prideful, and foolish.

No idea what caused the initial detonation, but if ammo is properly stored, damage will be limited. Bunkers and separation distance matter. Quantity should be limited for different classes of munitions.

Don’t put all your eggs in one basket.

Time to take a look at those damned Canadians. Not sayin’, just sayin’.

Reminds me of those Albanian blasts years back.