Did not enter our airspace; NORAD is monitoring the situation 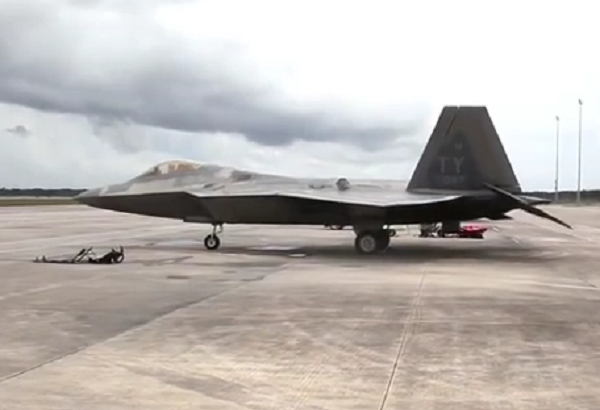 United States F-22’s intercepted two Russian Tu-95 Bear bombers near Alaska on Friday.  These are the same Russian bombers that have been probing our—and other nation’s—national air defense since at least early 2017.

Russian nuclear forces dispatch two strategic bombers into the air defense zone near Alaska on Friday and the aircraft were intercepted by American F-22 jets, the U.S. Northern Command said.

The Russian bombers, which are nuclear capable, did not enter sovereign U.S. or Canadian airspace, he added.

Miller said there was no unusual activity related to the encounter and there were no communications between the F-22s and bombers.

“NORAD continues to monitor all air activity emanating from within and outside North American airspace,” Miller said.

The spokesman provided no further details on the mission of the Russian bombers.

Because who doesn’t want to watch an F-22 show off (some of) its capability:

“there was no unusual activity related to the encounter and there were no communications between the F-22s and bombers.”

How does that qualify as an interception?

@irv It’s an interception because Ruskies, and everyone else, test radar and deployment times of potential aggressor forces in response to possible incursions to their air and sea spaces. Interception presents to the intruder from getting any closer and becoming a more immediate threat. The more immediate the threat becomes prior to interception drastically reduces the reaction time of the defender.

“presents” should be “prevents”