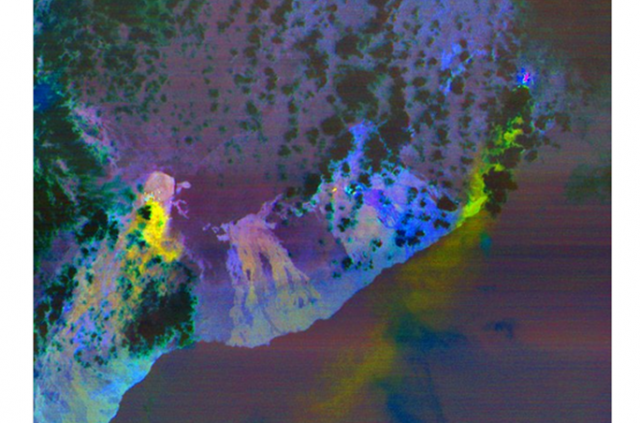 The agency’s Hawaiian Volcano Observatory issued the highest level alert in the afternoon after increased activity within Halemaumau crater.
“Ash has been rising nearly continuously from the vent and drifting downwind to the southwest. Ashfall and vog (volcanic air pollution) has been reported in Pahala, about 18 miles downwind,” HVO said.

The burst in volcanic ash from Halemaumau Crater began at about 7 a.m. The National Weather Service said northeast winds were expected to carry the ash downstream across the Big Island Kau district, affecting the communities of Punaluu, Wood Valley and Naalehu into the early afternoon.

Of particular concern is the high level of sulfur dioxide gas that is being emitted during this eruption cycle, which has triggered an emergency warning related to air quality.

The vents that have formed on Hawaii’s Big Island from one of the world’s most active volcanoes are releasing dangerous levels of gases that pose a danger to anyone nearby, officials warned as a new fissure in the area opened up Tuesday.

The Hawaii County Civil Defense said the volcanic fissures in the southeast area of Lanipuna Gardens neighborhood are issuing high levels of sulfur dioxide gas, which are causing the air quality to be to be placed under “red” conditions.

“Condition RED means immediate danger to health so take action to limit further exposure. Severe conditions may exist such as choking and inability to breathe,” the agency said. “This is a serious situation that affects the entire exposed population.”

The recent eruption of Hawaii’s Kilauea Volcano triggered a number of gas and lava-oozing fissures in the East Riff Zone of the volcano, seen by @NASAEarth satellites in space. Here, sulfur dioxide plumes from the new fissures are shown in yellow & green: https://t.co/XrNhVonmEW pic.twitter.com/aO5M3GrYBV

The volcano may also cause an economic disaster, as tourism has evaporated as a result of the eruption.

Some cruise ships have even decided not to go into port on the island, with a handful even refusing to land on Kona, which is about 100 miles away from the volcano.

“The volcano isn’t just our No. 1 attraction, it’s the state’s No. 1 attraction,” Ross Birch, executive director of the Island of Hawaii Visitors Bureau, told CNN. He noted that when volcano tourism stops, it has a direct impact on spending across the island.

President Donald Trump has agreed to the request of Hawaii’s governor and has declared the event a major disaster. It appears to be a very timely move.

Summary of #HVO #Kilauea VAN/VONA: Ash eruption at summit has increased in intensity. NWS radar & pilot reports show top of the ash cloud is as high as 10,000-12,000 feet above sea level. Ashfall and vog has been reported in Pahala (18 mi downwind). #KilaueaErupts pic.twitter.com/ChzRdu0Ch7

The gods are punishing them for giving us obama and hiding his birth certificate.

Disaster? If the volcano never erupted, nobody would visit. There’d be zero tourist interest. This event is the big attraction, it just happens that for a short time you can’t stand at volcano’s center.

The whole thing is slow-moving, you have plenty of time to get away from the crawling lava, and plenty of warning to get away from sulfur dioxide plumes. Sure, if your wood sided, wood shingles house is near the lava zone, a flying ember is going to set it on fire. The residents knew that, and most built simple inexpensive houses they could afford to lose. Those that didn’t, well, they just learned something. Or they learned nothing and are now munching on a tide pod.

I hope the scientists that are watching this are an inclusive and diverse group. I also hope they support native traditions and beliefs and have a strong representation of native Hawaiians with advanced degrees in physics, geology and plate tectonics.

Depending only on science without taking into account the natives who have lived there for ten hundred million years along with the dinosaurs would be culturally intensive. Until I see CNN video of a 63 year old white PhD wearing a grass skirt dancing to appease Pele, I will not believe their commitment to real diversity no matter what kind of shirt he is wearing.

This seems to be… an odd take.

If you did, you would realize how not odd his take is.

It is two levels of sarc.
1) it is a swipe at the SJW types who literally make the same kind of statements about any other scientific research. Hawaiians are basically Leftist SJW’s, and
2) On November 13, 2014 the European Space Agency actually was able to land a robot probe on a comet 300 million miles away. Kind of a big thing. First time it had been done. The scientist representing the team making the announcement, Dr. Matt Taylor, was wearing a shirt made for him by a Hawaiian female friend, a Hawaiian style shirt that amongst the other sins of cultural appropriation has a picture *gasp* of a hula girl. To the raving Left, this mortal sin far outweighed the accomplishment. He was forced to grovel in public for wearing the shirt and offending American feminists.

Another take, this volcano could cause a drop in global temperatures. It would be most effective if the eruption is a big one. It sounds like it may be.

I wish NASA and JAXA would get a jump on a new supersonic transport already like they were supposed to so that it wouldn’t be so hard to visit Hawaii. I’ve always wanted to see that volcano and the lava flows.

I shot pics 15 ft from the edge in 98, figuring the 30 seconds I was out there was worth the risk. Bottom of new sneeks melted. As we were walking back to the car (3 miles over ropey lava sux), there was a huge steam plume, and we learned from others that the area we were in did collapse into the ocean. You just gotta pick the right 30 seconds.

What about localized global climate change? Shouldn’t Hawaii have to pony up big bucks for their eco-porn. Hawaii owes the entire Pacific area countries reparations for the harm they have inflicted!