The problem here is less about inequity and more about attitude. 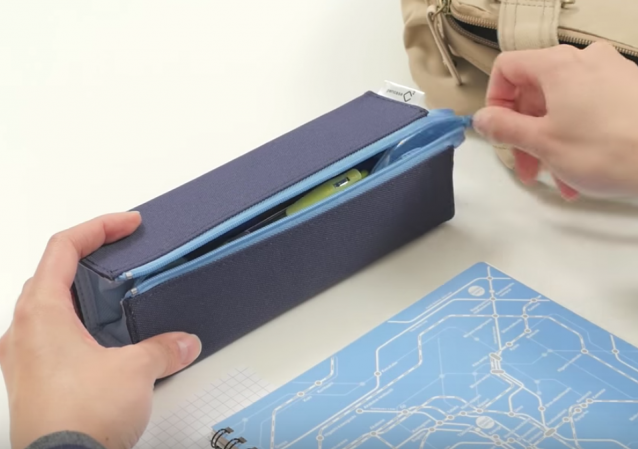 Who knew primary schools were plagued with status symbols? Or that this was even a thing?

One British school has banned pencil cases and is outlawing any designer goods that might distinguish one student’s property as more expensive than another’s.

St Wilfrid’s Primary School in Blyth, Northumberland, said it had taken steps to get rid of any “designer goods”.

Head teacher Pauline Johnstone said pencil cases have been banned “so there’s no comparison on the tables and children are learning”.

St Wilfrid’s was among more than 100 schools in a project to stop poorer pupils being stigmatised.

After working with charity Children North East, the school has begun providing stationery and has cut down on the number of dress-up and fundraising days.

“There was a culture within the school, within pupils, that noticed those children who were never in on PE days for example,” Ms Johnstone said.

“Part of our uniform policy is a standard backpack so we don’t have any designer goods.”

The ban falls under The Poverty Proofing the School Day project which also discourages conversations that discuss “what we did at the weekend.”

The Poverty Proofing the School Day project, led by Children North East, encouraged teachers to look at ways in which some pupils might be unwittingly excluded.

Schools said it has led to higher attendance and better results.

The charity also said “dress-up” days or conversations about “what we did at the weekend” can also penalise those from low-income backgrounds.

It said schools also found more discreet ways of distributing free school uniforms as parents and children were reluctant to approach them directly.

Pupils at Burnside College in Wallsend, North Tyneside, said not having the “right stuff” caused “pressure” and could lead to bullying.

Jason, 14, added: “If you don’t have the expensive stuff people will call you things like tramp, which isn’t right.”

Like most social programs, this one seems as well-intentioned as any. But failing to prepare children for the world’s cold unfairness and heartless inequity causes much more harm than good, as does passing up the opportunity to teach children how to be respectful to others.

The problem here is less about inequity and more about attitude. And banning pencil cases won’t fix either.

Northumberland
The Vikings are requesting their DNA back…

I think this is brilliant, they should also ban clothes and shoes, cause even among poor, there are degrees of poor, and someone might have something unequal to others.

Next, in fairness and decency, they should have everyone’s head, cause some people are just unfairly blessed with beautiful hair, and hair envy must be a thing. Oh, and eyes too, as Blue eyes and Brown eyes are not the same, and they can’t compete with green eyes.

And height too. Those who are taller just have to sit in wheelchairs. Or something.

I mean, come on man. The horror that everything isn’t equal, so lets ban it and create more little monsters who can’t handle it if someone has something they don’t.

Already very presciently described by Kurt Vonnegut in 1961, in his dystopian science-fiction story “Harrison Bergeron.” I read it as a young teenager. It has haunted me ever since. https://en.wikipedia.org/wiki/Harrison_Bergeron

They need to stop allowing dumb or poor people to immigrate, problem solved.

I have completely given up on the United Kingdom. The entire island has gone nuts.

I would have traded my lunch money, after school snack, and even my dog, for one of those pencil cases. As I have progressed, nay, evolved, I expect to settle for nothing less than a beachfront estate in Hawaii, which I don’t have, and others do. #SharedEstate

Aww. You just wanted a pencil box to hold the guts of an old digital clock so you could frighten your classmates and get an invitation to the White House.

Can’t have pencil cases. They might used to hold pointy things.

Don’t forget, that stunt was used to take a crack at winning the ghetto lottery.

There was also the false narrative that the boy built the clock, and was some sort of genius.

“Northumberland
The Vikings are requesting their DNA back…”

Considering the present state of Iceland, Denmark, Norway, and Sweden….

So, will the fricking royals start dressing down? Everyone should be equal.

Right. Instead of teaching kids respect, try to hide their differences from … their teachers. Because the kids will know them anyway, no matter how hard their elders pretend it’s not so.

Truly, from the theater of the absurd. These people would have children gathered around, squatting under a tree scratching in the dirt with sticks. It’s impossible to imagine how they’d have the rest of us behave.

Hair shirts for everybody . . .

They’ll ban the pencils as soon as someone gets stabbed with one.

More likely when some kid shows up with one of those imported Ticongeroga pencils. More expensive you know!

And all the kids have to do is go outside the school, look out the window, go to another part of town, watch the TV or visit with their friends to see that sometimes their stuff is less expensive than someone else’s.

To use an English word: monstrous.

But then it’s about what we can expect from Formerly Great Britian.

This is the fruit of leaving leftist women in charge. Far too much energy expended in soothing the feelings of the hypothetical victim

Brits are hyper-aware of their long-history of class-based disparity and bias. It’s their thing. They try to get into racism and xenophobia and all the other fun isms and phobias that U.S. SJW’s beat us with, but they’ll always return to class in the end.

It’s a hold-over from the empire, from their investment in a titled aristocracy, and from their deep roots in feudalism. They’re trying to make up for it all by banning pencil cases. Or something.

It’s no less absurd than our descent into “white guilt” and the resulting supremacy of the race-baiting left in dictating our politics and culture for the past century or so. Reparations, banning pencil cases, none of it does a thing, and the race and class baiters just keep on going, demanding more concessions, more deference. It doesn’t stop and will never stop until the conversation switches from real and perceived damages of the past to how we all move forward now.

Just so long as we are all perfectly clear. Class has nothing whatsoever to do with socioeconomic grouping. There are ample “working class” nouveau riche who strive vainly to buy their way into the upper class. That strategy doesn’t work effectively, any more than the numerous destitute or bankrupt members of the landed gentry who fail to become working class, or are regarded as stupid inbreds. Individuals that come from the former colonies (US, New Zealand, Australia etc) are curiously exempt class distinction in the UK at least intially, and are often quite ‘mobile’ across classes. When all is said and done, ‘class’ seems to have something to do with the words that come out of one’s mouth, how they are expressed and what they sound like. History, lineage and class have nothing whatsoever to do ‘pencil cases’. What does? Pure, unadulterated Marxism at its dystopian best in the edukashun system. It will never stop until the infection of cultural Marxism and political correctness is washed away by a torrent of accepting civilised behaviour.

Yes, we don’t really have anything at all like the British “class” system. We have our own, and it’s very different. So the ways they try to deal with theirs seem particularly alien to us. (Not to imply that fretting over pencil boxes is a good way to deal with anything.) It’s pervasive and durable; the major preoccupation of English literature, from Austen through Hardy to Wilde and Wells (and doubtless much further, those are the first to come to mind at this time of the morning). Even drolleries such as the notorious “Our American Cousin” were constructed around the English concept of class.

In retrospect … those Dead White Guys did well to leave British “class” behind ‘way back when the country was young.

Millenias down the line, people will remember this event as the inception of the Borg.

Since we cannot make dumb people smarter, they will end up medicating all smart people to bring them down to the lowest common denominator.

True, and expressed succinctly by Kurt Vonnegut in 1961, in his dystopian science-fiction story “Harrison Bergeron” where cognitive ability is intentionally handicapped by the US Handicapper General. https://en.wikipedia.org/wiki/Harrison_Bergeron

…and then for your undying entertainment there is:
‘Minus IQ | The Pill to lower your IQ permanently’
https://www.youtube.com/watch?v=z9pD_UK6vGU

I was in a small town in Sweden and the movie theater had a unisex bathroom and it wasn’t a one person bathroom. I wouldn’t have been surprised if it was a major city,but a small town where I thought there would be conservative values. Europe is more far gone than I realized.

So. Do we fight and die and expend our treasure for them AGAIN in the next war?

The UK has become a very scary place: a place of soft leftist fascism envisioned by George Orwell and Anthony Burgess.

Leftists first come for your speech. Then they imprison. Then they kill.

That fascism in the UK is starting to murder, like fascism always does. Just ask Alfie Evans:
http://www.foxnews.com/opinion/2018/04/25/will-uk-really-let-alfie-evans-die-in-hospital-unwilling-to-treat-him.html

But the oaks can’t help their feelings
If they like the way they’re made
And they wonder why the maples
Can’t be happy in their shade?

There is trouble in the forest
And the creatures all have fled
As the maples scream ‘oppression!’
And the oaks, just shake their heads

Now there’s no more oak oppression
For they passed a noble law
And the trees are all kept equal
By hatchet, axe and saw

I’d like to know the real story, rather than all the BS excuses for this move. Some kid shows up to school with something bought by one of his parents, and he is made to feel bad by a bunch of malicious adults because it wasn’t the “right thing.”

None of the adults involved in this hypocritical little farce of a morality play are fit to be allowed anywhere near children.

And God forbid your kid’s knife has a Damascus steel blade!