“The arrest is a significant blow to Daesh.” 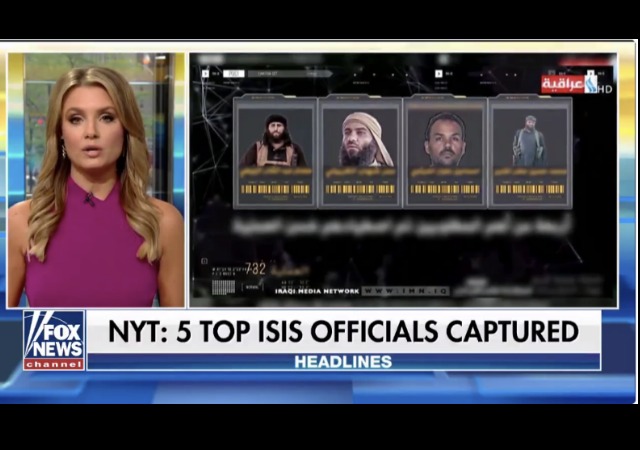 Two Iraqi officials announced that an operation between U.S. and Iraqi forces led to the capture of five top ISIS members. From The New York Times:

The three-month operation, which tracked a group of senior Islamic State leaders who had been hiding in Syria and Turkey, represents a significant intelligence victory for the American-led coalition fighting the extremist group and underscores the strengthening relationship between Washington and Baghdad.

Rudaw reported that officials identified one man “as Saddam Omar Hussein, who was reported dead in 2016.” The Central Investigative Court interrogated Hussein, who “admitted to ‘a lot of divisions and break-ups inside the organization.'” The others are “Saddam Jamal, a Syrian and ISIS governor of the eastern Euphrates region, and field commanders Syrian Mohamed al-Qadeer, Iraqi Omar al-Karbouli, and Iraqi Essam al-Zawbai.”

According to the coalition, the operation was done in coordination between Iraqi forces and the Kurdish-led Syrian Democratic Forces (SDF) across the border.

“The arrest is a significant blow to Daesh,” coalition spokesperson Col. Ryan Dillon tweeted on Wednesday, using an Arabic acronym for ISIS.

He said it “demonstrates close coordination” between the Iraqi security forces and the SDF across the border.

Brett McGurk, US special presidential envoy to the anti-ISIS coalition, also hailed the “great cooperation” between the two forces.

Turkish authorities captured Ismail al-Eithawi, a top aide to ISIS leader Abu Bakr al-Baghdadi and handled international money orders for the group, in February and gave him to Iraqi’s security advisor to the government Hisham al-Hashimi.

The Iraqi officials used the Telegram messaging app on al-Eithawi’s to convince the other four commanders to leave Syria and enter Iraq.

SDF & the coalition launched a campaign to eliminate the rest of ISIS “in two remaining pockets in eastern Deir ez-Zor province, east of the Euphrates.” A campaign on Wednesday killed 16 ISIS militants “in the Hajin area, on the banks of the Euphrates.”

Isn’t it just kinda freaky how he repatriate our folks from NK, get Iran under control and do this also. Sometimes things move so fast it boggles the mind. It’s only Thursday!

Isn’t that some kind of ointment?

Yes, because that would be so much worse than a short, rambling, insulting reply by you.

On balance, this was a good week for Duh Donald.

Pence had the good sense to NOT say “Gutsy move” WRT capturing the ISIS guys, which T-rump had as much to do with as Barracula had to do with getting bin Laden.

So that’s a good week from Mr. Establishment…on balance.

On the negative side, Duh Donald is continuing the anti-science, anti-market ethanol cronycrapatilism. But that’s little reported.

1. Trump didn’t have anything to do with this. The planning for this occurred on Obama’s watch.

2. Capturing ISIS big shots is contrary to our values.

LOL, that’s what I’ve been doing on the other forums where the libs keep saying everything good is from obaama’s time.
Posted earlier how obaama was so good at being able to scare N.Korea into surrendering the prisoners even after he’s been out for a year and a half and how obaama also knew ahead of time to set up the 3 month operation to grab the isis criminals.
Libs were frothing at the post.

The only good thing from ‘obama’s time,’ is when he was booted out of the White House.

And the portrait with the sperm on it.

May it forever haunt – and stigmatize – the low-life within it.

If the pattern holds, watch Stormy blow the entire thing off the front page.

notamemberofanyorganizedpolicital in reply to NavyMustang. | May 11, 2018 at 3:03 am

Besides I thought Yellow-Dog Drizzle Danielle had already been blow up. If not already this will blow her up up and away.

“Stormy Daniels Has Admitted She’s Not Paying Her Lawyer — Who Is Paying Him? It’s Time For Camera-Hungry Lawyer Michael Avennati to Come Clean Who’s Paying His Bills”

It’s all in the timing.

Well if there was ever an expert in blowing stuff, Stormy qualifies.

Doesn’t quite make up for the five Taliban leaders Zero set free, but it’s still progress!

I guess that John McCain was not notified of this operation before it occurred. After all, John is apparently a good friend of al-Baghdadi, after having lunch with him in Syria in 2013.

The problem with this news is that after the report of their capture there is not a statement as follows; “These five were all interrogated and then shot.

When asked what the next phase of the operation would be command answered ‘lather, rinse, repeat.’ We will keep you updated!”

naw: wring them dry in interrogation, then wring their necks on a scaffold. shooting is too good for them.

Oh my! Those isis aren’t the only enemies that got CAUGHT today!!!!

Judicial Watch: Emails Show That Comey “Coordinated” With Robert Mueller About His Congressional Testimony Before His Appearance

Stormy Daniels Has Admitted She’s Not Paying Her Lawyer — Who Is Paying Him? It’s Time For Camera-Hungry Lawyer Michael Avennati to Come Clean Who’s Paying His Bills

say “Hi” to me over there one day. same nick both places

Is that Ace of Spades?

RedEchos in reply to notamemberofanyorganizedpolicital. | May 11, 2018 at 5:16 am

Yes. Highly recommended to get your daily dose of snark.

I though them to be almost all fact. (Many a truth is said in jest.)

And to think that we were endlessly told by Obama that ISIS could not be defeated within ten years of intensive work and that the North Korean mess could never be resolved lest there be a nuclear war involved.

Would be interested in support for both of those claims.

I’ll research it and track down the exact quote for you. But not for free. How “interested” are you really? Obviously not enough to do it yourself.

See, I used to do this kind of thing for free, but when I posted the quotes the guy (leftist) would say “whatever” and wander off. Waste of my time. So I charge a fee now.

Fen: I’ll research it and track down the exact quote for you.

Not a biggie. We’ll just consider it an unsupported claim.

No, we’ll just consider you a lazy troll.

Interest in her on our side is zero.