This is Why Democrats Now See Kanye West as a Threat

This is Why Democrats Now See Kanye West as a Threat

“No other ethnic group is chained to a single political ideology” 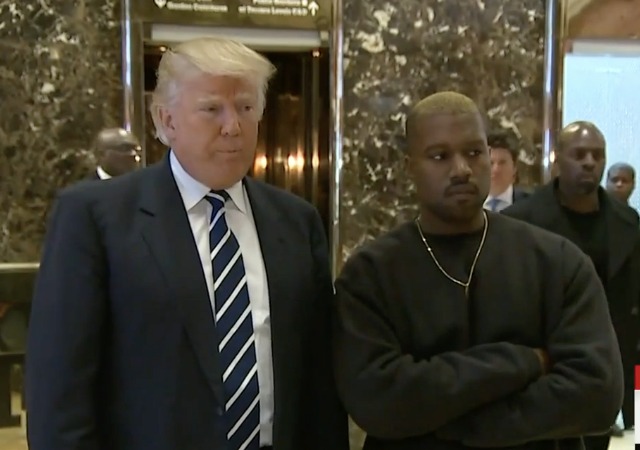 In the days following Kanye’s Wests positive remarks about Trump, he was ridiculed by late-night hosts Stephen Colbert and Jimmy Kimmell. Other celebrities like Snoop Dog attacked Kanye on Twitter. These weren’t only unfair criticisms of Kanye, they were warnings to others. Stray from the liberal narrative and you too will be fair game.

What’s at the heart of all of this is fear? Imagine a national election where celebrities, some of them minorities, were rooting for the Republicans to win. That’s the Democratic party’s worst nightmare.

Jason Whitlock, who is black, recently wrote this for the Wall Street Journal:

Kanye Had One of the Best Tweets of All Time

“You don’t have to agree with trump but the mob can’t make me not love him,” Mr. West tweeted. “We are both dragon energy. He is my brother. I love everyone. I don’t agree with everything anyone does. That’s what makes us individuals. And we have the right to independent thought.”

The tweet heard round the internet pleased America’s Twitter-loving president, who promptly thanked the rapper. It had a much different effect on liberal elites. Mr. West’s tweet and his other missives supporting center-right figures like Candace Owens and Scott Adams constituted left-wing betrayal of the highest order. The man who once vilified George W. Bush for the slow response to Hurricane Katrina was joining the birther president?

Rep. Maxine Waters (D., Calif.) bashed Mr. West for speaking “out of turn.” Mr. West shared over Twitter text messages from singer John Legend scolding him for aligning with President Trump. “Don’t let this be a part of your legacy,” implored Mr. Legend. The Atlantic’s Ta-Nehisi Coates even spent 5,000 words admonishing Mr. West for straying too far from his betters’ thinking…

Liberalism is black people’s cigarette. In the immediate aftermath of the civil-rights movement, Democrats marketed liberalism to us as fashionable, sophisticated and liberating. Today it needs a surgeon general’s warning: hazardous to your family and the values you were taught as a child.

Whitlock eventually says something that should keep Democrats awake at night:

…maybe we, African-Americans, have chosen the wrong strategy. No other ethnic group is chained to a single political ideology.

If this type of thinking takes hold in even a small percentage of African-American voters, the Democratic party is finished. What if more celebrities figure out that being OK with Trump and Republicans is the edgy thing to do?

As corporate progressivism vies against Trumpian nationalism for the future of America’s Empire, celebrities are inciting their own upheaval within Hollywood.

American Psycho author Bret Easton Ellis warned for years of an impending shift against progressive values in a town long touted as a bastion of liberalism. Following Kanye West’s controversial break with liberalism over Twitter and TMZ, Ellis is seeing his premonition unfold.

“As someone who considers themselves a disillusioned Gen-X’er, I think there IS a backlash brewing against leftist hysteria,” Ellis told Observer over email. “What I used to semi-align myself with has no answers for anything right now, just constant bitching and finding ways to delegitimize an election.”

“That is not a plan for 2020, and if I was a hardcore Democrat I’d be very worried despite the blue wave of 2018, that may or may not fully arrive,” added the controversial novelist.

Democrats can’t afford defectors. That’s why Kanye is suddenly seen as a threat. Anyone who follows his lead will get the same treatment from the left.

notamemberofanyorganizedpolicital in reply to Valerie. | May 9, 2018 at 1:18 pm

Valerie, I wonder if Mike has seen this Excellent Bill Whittle video about Kanye West?

Every American needs to view it!

“…..Bill Whittle explicating the deep meaning of the Kanye kerfuffle in “Kanye West: Racist” (video below). At right around 3:06 Bill reveals a bombshell that would have prompted me to do one of those Danny Thomas spit-takes….

Fuzzy Slippers in reply to notamemberofanyorganizedpolicital. | May 9, 2018 at 9:19 pm

This is great, thanks for sharing it! Love Bill Whittle. 🙂

It reminds me of that old Far Side cartoon where a few cows are grazing in a field. They’re all standing there wide-eyed looking at one cow who is shouting “This is grass! We’ve been eating grass!”

You could probably replace every college text with Far Side Anthologies and end up with just as well prepared students. Being named Bob in real life, I frequently arrived at work with that day’s comic taped to my office door. My favorite is the dog going to the vet to get tutored, and I still think it could be adapted to your average college student. “Hey Randy, I’m going over to the Gender Studies dept to get tutored.”

I did a philosophy paper on free will many years ago and used the below cartoon on the front page. That alone, in my opinion, was worth an A! 🙂

“…..added the controversial novelist.”
Anyone who steps outside of liberal hive-thinking is automatically labeled “controversial”.
It is becoming tiresome, this word “controversial”, much like radical, kerfuffle, extremist, etc.

As is “activist.”. Every time I see Amal Clooney or some other semi-celebrity described as an “activist,” I want to puke.

Contrast his positive images with the dissonant screeching of harpies.

Any system based on belief and not performance will crumble quickly once faith is lost. We can hope.

To paraphrase a REEELLY old song —
How ya gonna keep them, down on the Plantation, after they’ve seen…

Your plantation statement really sums up the UK. They have never known freedom, as Americans have. They have only enjoyed a period of lesser peasantry, which is now going backwards, as all means of standing up to oppressors (pointy sticks and rocks) disappears.

I agree that Kanye has earned a bit of respect from me with his stand. Even if it were a stand I disagreed with, I still respect those with courage to step out of the fold.

It’s interesting to see and hear the things the Marxist left are doing in reaction to Kanye. Personally, I think Kanye is a twit, but if other blacks see how he is being treated for a pretty innocuous statement it can turn into a big turning point.

I find it incredibly offensive that Maxine Waters, the blowhard idiot who always talks “out of turn” as loudly and frequently as she can, then tells Kanye he is talking “out of turn”. Really? So a man cannot express his views and thoughts without permission from the plantation master?

Kanye has even gotten warnings not to leave his home as gang bangers are going to target him. So, for a black man to say anything against the Democratic party it is a death sentence?

Kanye should start a #MeToo movement, maybe call it #unchained.

Not a fan of his, but I’m a fan of hypocrisy exposed.

After watching the left’s behavior for the pat few years, I sincerely hope that lots people become former demoncrats.

After watching the left’s behavior for the pat few years, I sincerely hope that lots people become former democrats.

The entire brand of the party is based on helping the downtrodden. The doe eyed youth that just finished reading Native Son and …Cage Bird Sings and are riddled with white guilt will be basing their political choices on information that is truer to reality than what has been sold for the past 4 decades.

Kanye and those like him must NEVER stray far from the plantation or Dems will start losing the youth vote advantage.

Suffice to say the GOP will find a way to make Dems successful again. They always do.

Kayne is not the one making the change in the black community. The change already happened. Kayne just noted it out loud. The democrats can burn him at the stake to send a message to other celebrities (they would if they could), but it would just make Kanye a martyr and open the eyes of the black community even more.

Those who continue to spew the nonsense of the left are creepy old losers in pussy hats now. Sure, they get some of the young kids and amplify their voices on social media and late night comedy. But it relies on 100% conformity of thought in academia, press, entertainment and social media.

Until that alleged change is measurable in votes I’ll assume it didn’t happen.

I wonder how Kanye feels today about his live-on-TV disparagement of GW Bush during hurricane Katrina.

Kanye is off-plantation and the Democrats don’t treat their runaways too kindly. Still doesn’t change my thoughts about Kanye that he is an egotistical A-hole of the highest caliber. But at least he has decided to think for himself and that is worth something.

If more follow Kanye, we may see Red Pills all around Hollywood.

As to how Kanya feels about what he said about Bush.

Probably the same as the feckless leaderless handling of Katrina was disgraceful.

We need to give the Levee Board some credit here for their efforts. Why “A Confederacy of Dunces” was not so perfectly used to describe them was beyond me?

No, it wasn’t. The federal response was all that could be expected and more. Michael Browne got knocked because he wasn’t aware of the rioting and crime wave inside the Superdome — because there wasn’t one. He looked like a fool when he said that he was learning about it from the TV and his people on the ground hadn’t told him about it — but that was because it wasn’t happening. His mistake was assuming the TV was telling the truth, and apologizing for his own poor information, when in fact he was better informed than they were.

A better question is why we have federal responses to local disasters in the first place. There’s no justification for it in the constitution. That is not what the army or the national guard are for. But they’ve been doing it since at least 1905.

Let’s say he doubles the percentage of blacks voting republican, what percentage of the vote would that be? Maybe 1-2%, of the total vote almost all in hard left districts where 100 to 150% vote democrat. It won’t move a single race an inch.

What this does do is shove the Overton window way out of frame for democrats. They can’t have that.

That would be funny if it weren’t so true.

I guess the Left is now realizing that being “woke” is now starting to mean something all together different.

“we have the right to independent thought.”

That is a REVOLUTIONARY statement in America today.

Which is, in itself, absolutely shocking. I couldn’t imagine anyone thinking, much less believing, that any other race’s political ideology was pre-determined by the color of their skin. That’s just insane! But, for black people, it is de rigueur.

For proof, just look at how the Left is completely freaking out over it. Denouncing Kanye in the most vicious, and typically RACIST, terms they can conjure.

What would remain of the D Party if there was a preference cascade of black people recognizing the fact that that execrable institution does not, and has never, supported their interests in any way?