The Truth is that Feminists Only Care About Some Gender Wage Gaps, But Not All of Them

The Truth is that Feminists Only Care About Some Gender Wage Gaps, But Not All of Them

“As for the radical feminists, you might ask them, if they feel so strongly about equal representation, why didn’t they themselves pursue a degree in engineering?” 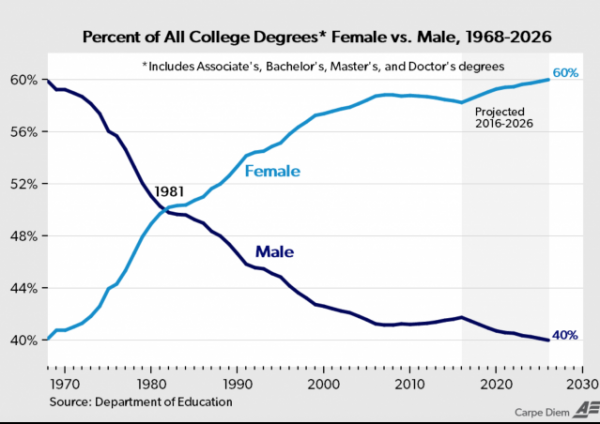 AEI expanded on a fantastic post in the Washington Examiner that explored yet another vein of hypocrisy in the gender wage gap argument.

I was sitting in a ballet studio, warming up before class, when I was unexpectedly prompted to revisit the idea of the “gender gap.” Surrounded by that standard 20:1 female to male ratio, I asked myself, where is the public outrage? If we tend to assume that occupational gender disparities are invariably the result of injustice, then, by all accounts, ballet was suffering from an epidemic of anti-male sexism.

But that obviously isn’t the case, and you don’t need to launch an investigative campaign into casting or hiring practices to know why. Men, on average, simply are not as interested in ballet as women. It isn’t even close, and thus neither are the numbers of men and women in ballet.

The selective outrage of feminists over disparities like the one in tech is revealing. There is a conspicuous shortage of school programs, campaigns, marches, and hashtags to end the gender gap in, say, teaching, or counseling, which are professions overwhelmingly dominated by women. Nursing is a pretty good gig — it pays well, is flexible, and nurses can find work anywhere. So, where should we look for the anti-male bias that made it so that more than 90 percent of nurses are women?

…I salute women who work in fields where they’re outnumbered, but I don’t appreciate or support policies that patronize women at men’s expense for the sake of “diversity” in any occupation, under any circumstances. My female friends in STEM agree, and they aren’t the ones pushing for these ridiculous reparations.
Advertisement

As for the radical feminists, you might ask them, if they feel so strongly about equal representation, why didn’t they themselves pursue a degree in engineering? Expect to hear something like, “well, I did always prefer English, and calculus was such a bore.”

AEI capped off the abbreviated version of the WaEx post with a chart (they always have the best charts) that plots the growing gender degree gap:

That’s a gap few are talking about.

I question the validity of the “projections” in that chart.

The curve indicates that women surpassed men in the number of degrees earned in 1981, continued to rise to a high of ~58% around 2006, and then tapered off slightly for 10 years (until 2016).

Why are they projecting a sharp reversal of that tapering-off and an immediate and dramatic rise, exactly where the real numbers stop and the “projection” starts? It can’t be social campaigns or feminist political actions to push more girls to pursue degrees; those things take time, and IF it causes a change in direction it would be gradual. So what makes them think it’s going to happen so abruptly?

The “wage gap” is a lie the left never tires of telling. Ok, fine. Then what about the death gap? Men are 12 times more likely to be killed on the job as women. Close the death gap now!