“The student movement to protect our rights is not over.” 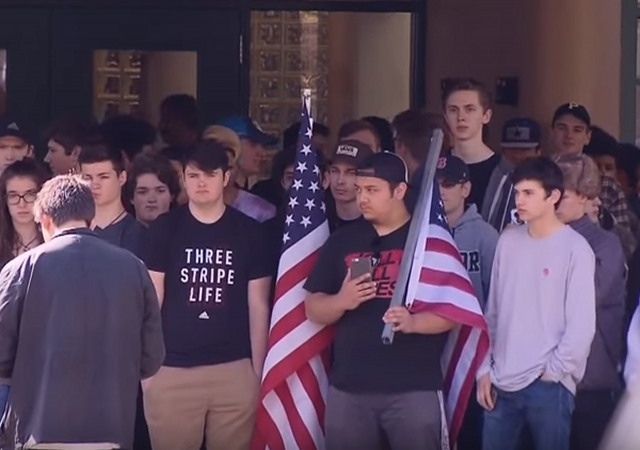 High school students in at least forty states participated in a walkout in defense of the Second Amendment and gun rights this week. The walkout was dubbed “Stand for the Second” and while many national media outlets carried the story in print, national television coverage was scarce.

CBS News wrote a story about it:

Students across the country staged another walkout over guns, but this time it was in support of the Second Amendment. Teens from more than 500 schools marched for gun rights and ownership on Wednesday, organizers said.

The “Stand for the Second” event was launched in response to student-led walkouts in March to show that not all students agree more gun laws are the answer to protect schools. The March protests against gun violence involved students at thousands of schools from coast to coast; Wednesday’s events were more modest in size, but still passionate.

“Students around the country made their voices heard, saying that they support our constitution and oppose gun control,” the event’s website said. “The student movement to protect our rights is not over.”

Stand for the Second was organized by 18-year-old Will Riley, a high school student from New Mexico. The Tea Party Patriots Citizens Fund also assisted in the movement to “protect our natural rights that are enshrined in the constitution,” according to its website.

Riley appeared on FOX News to discuss the event. From the FOX News Insider:

Student Organizes Pro-Gun Walkout: ‘You Can Only Violate a Right, You Can’t Take It Away’

The high school senior who organized a nationwide school walkout in support of the Second Amendment said he is more concerned with protecting the rights of individuals than targeting weapons themselves.

Will Riley, who organized the “Stand for the Second” walkout said people forget that the right to bear arms is, in fact, a right that can’t be taken away.

“You can only violate a right, you can’t take it away,” he said.

According to the organization’s website, the walkouts were held on May 3, during which “Students around the country made their voices heard, saying that they support our constitution and oppose gun control.”

“It’s not about me getting to keep my guns. I don’t have any,” Riley said. “It’s about peoples’ rights. I think that’s how we need to focus on this.”

Local news outlets did a great job reporting on the event. Here are a few examples:

As good as that is, it pales in comparison to the hero-like status given to David Hogg and company by CNN.

The kid’s right. He has an understanding of our form of government which surpasses all Democrats in office and far too many GOPers. That most of the people don’t understand his point is what’s truly frightening.

Does government violate this principle of controlling/limiting itself? All the time. And the reason? Because the people don’t know their form of government, that our greatness and our uniqueness comes because the people are free to act in their own interests precisely because government is limited.

As to the point of repealing the 2A. Even if removed from being expressly protected in the misnamed Bill of Rights, the right to bear arms is still there because it’s an inalienable right. The left would have to amend the 9A and the 10A to do the inherent right to bear arms real harm.

Why limited government has been so beneficial for the people of this country is explained quite well in this video called Overview of America,

“The high school senior who organized a nationwide school walkout in support of the Second Amendment said he is more concerned with protecting the rights of individuals than targeting weapons themselves.”

These young people give me hope for the future.

However, whether it’s the anti-constitution gun grab nutters, or striking teachers, or these kids here, school walkouts should not be tolerated. Period. The tax payers are funding the schools, their transportation, its security, administration, maintenance, etc. to be used as agreed and required by law. These facilities are NOT the students’ (or striking teachers) personal protest platforms for pet causes.

Now, get your raggedy &ss back in class!

As I learned in my high school years, you can learn more out of school sometimes than in school.

A LOT more, and a lot of good stuff.

Never hesitate to take your kids out of school for a good educational outing. Both of you will be rewarded.

“Never hesitate to take your kids out of school for a good educational outing. Both of you will be rewarded.”

We agree. But ‘take your kids’ posits the authority by parents (grandparents, etc) to do a good educational outing. A mass, momentary student-lead exodus to express themselves during school hours doesn’t meet that definition.

I think it was a GREAT exercise in Civics…!!! A better one could hardly be contrived!

Never hesitate to take your kids out of school for a good educational outing. Both of you will be rewarded.

But can you? I was astonished to be informed that in NYC parents of public school students aren’t allowed to take them out of school for the day or even for a few hours without the school’s permission, that this would be considered truancy and they would be subject to potential legal consequences.

Old and busted: All the news that’s fit to print.

New and hip: Only our agenda that’s fit to print.